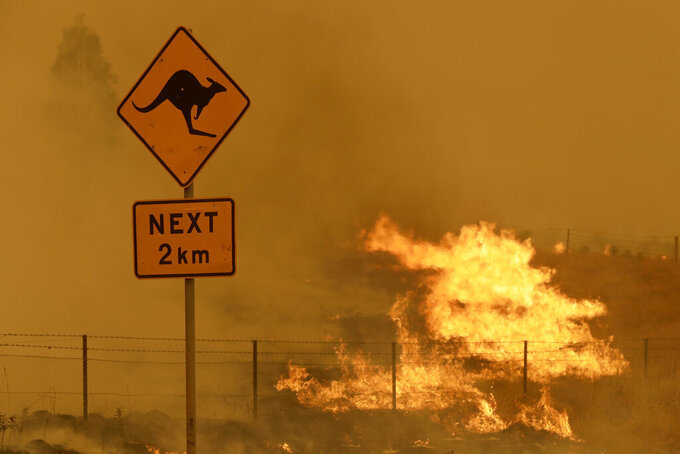 Rick Rycroft, ASSOCIATED PRESS
FILE - In this Feb. 1, 2020, file photo a fire burns in the grass near Bumbalong, south of the Australian capital, Canberra. The head of environmental group Greenpeace warned against efforts by countries and corporations to "greenwash" their ongoing pollution of the planet at the upcoming U.N. climate talks. (AP Photo/Rick Rycroft,File)

BERLIN (AP) — The head of environmental group Greenpeace on Thursday warned against efforts by countries and corporations at the forthcoming U.N. climate talks in Glasgow to “greenwash” their ongoing pollution of the planet.

The summit hosted by Britain has been described as “ the world’s last best chance ” to prevent global warming from reaching dangerous levels, and is expected to see a flurry of new commitments from governments and businesses to reduce their emissions of greenhouse gases.

But climate campaigners say behind-the-scenes lobbying before the summit could hamper efforts to achieve an ambitious deal that would ensure the world stands a chance of capping global warming at 1.5 degrees Celsius (2.7 Fahrenheit) as agreed in Paris in 2015.

“This Glasgow meeting really is a vital moment where governments need to be courageous,” said Jennifer Morgan, the executive director of Greenpeace International.

“They need to show they’ve understood the science, listen to their people and go much further than they’ve been stating thus far," she told The Associated Press in an interview.

By doing so, governments would "give that kind of hope and confidence to their people that they got this and that they’re willing to do things that their corporate interests don’t want them to do,” she added.

Morgan pointed to leaked documents showing how countries such as Australia, Brazil and Saudi Arabia are apparently trying to water down an upcoming U.N. science panel report on global warming as evidence of the way in which some governments’ public support for climate action is undermined by their efforts behind closed doors.

Documents obtained by Greenpeace indicate how those countries wanted the Intergovernmental Panel on Climate Change to remove references to the need to shut down coal-fired power stations, reduce meat consumption and focus on actual emissions cuts rather than ways to capture carbon already released into the atmosphere.

A spokesman for the IPCC’s secretariat in Geneva downplayed the impact such lobbying efforts have on the panel's final reports.

“Review by governments and experts is a fundamental part of the IPCC process for preparing reports,” said the spokesman, Jonathan Lynn. “The IPCC principles are designed to ensure that this review contributes to a comprehensive, balanced and objective assessment in an open and transparent way.”

Australian Minister for Industry, Energy and Emissions Reduction Angus Taylor’s office said in a statement that to assert Australia “commenting on a draft is somehow ‘interference’ is categorically false.”

All comments received by the IPCC are published with their reports as they are finalized.

Greenpeace's Morgan said much of the lobbying is driven by corporations, some of which will also be at the so-called COP26 talks — including as part of government delegations.

“They’ll try and use this COP to show that they care, that they are really doing a lot,” said Morgan. “There’ll be a big greenwashing effort in Glasgow that needs to be called out and recognized.”

Governments, too, are likely to use the U.N. talks to announce new climate measures, even as they lobby against others, she said.

“If you look at what they’re doing to try and hold back the world from moving forward, it’s stunning,” she said. “It’s immoral, it’s unacceptable.”

Greenpeace and other environmental campaign groups have been critical of a wave of announcements by countries and industry groups, ranging from airlines to shipping firms, to aim for ‘net zero’ emissions. Rather than cut greenhouse gas emissions to nil, those aiming for net zero pledge to release only as much carbon dioxide or other pollutants into the atmosphere by a certain date as can be captured again.

The math around net zero is murky and activists say if it’s not scientifically rigorous that target risks detracting from the effort to cut emissions as quickly as possible.

“(Some companies) want to continue what they’re doing, but they want to pay just to plant trees somewhere else,” said Morgan. “That is not the solution to the nature and biodiversity crisis.”

She cited a recent report by the International Energy Agency which concluded that there can be no more new coal mines or oil and gas wells if the Paris goal is to be achieved. Yet last week, a separate U.N.-backed study found that even current fossil fuel production plans for the coming decade would result in over twice the emissions allowed for the world to maintain a chance of meeting the Paris goals.

Morgan said the spotlight being put on the talks in Glasgow and some parties' efforts to bloc agreements on sensitive issues could embolden those countries that want an ambitious deal.

“They have to be ready to move, go beyond their comfort zones and come together because you can see the level of opposition that’s coming in at them," she said.

A group of nine nations, including Costa Rica, Sweden and the Marshall Islands, on Thursday called for countries that haven’t yet done so to update their climate targets ahead of the Oct. 31-Nov. 12 talks in Glasgow. They also backed a long-standing demand from poor nations for rich countries to make good on their pledge of providing $100 billion in aid each year to tackle climate change.