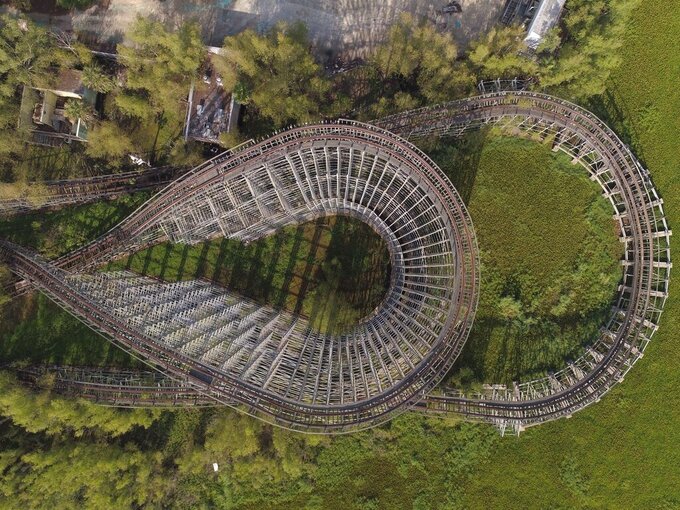 Uncredited, ASSOCIATED PRESS
In this June 22, 2019 aerial file photo, a roller coaster and concession buildings of the abandoned Six Flags amusement park are seen in New Orleans. New Orleans has chosen a developer to revitalize the site of a former amusement park in the eastern part of the city that has been vacant since 2005's Hurricane Katrina. (DroneBase via AP, File) 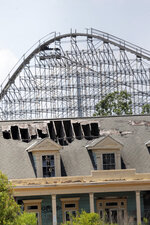 NEW ORLEANS (AP) — New Orleans has chosen a developer to revitalize the site of a former amusement park that has been vacant since Hurricane Katrina struck in 2005.

Mayor LaToya Cantrell said a group called Bayou Phoenix is the city's choice to develop the former Six Flags park for other purposes.

The site just off Interstate 10 has been an eyesore and an irritant to local residents for years after it never reopened after the hurricane. The roller coaster and other rides have sometimes served as a backdrop for movies. But, nearby residents say the site has become home to wildlife such as alligators, and people frequently break into the lot despite security outside.

“It has become a daily reminder, on so many different levels, not only of the devastation that was caused by Hurricane Katrina, but also really a testament of our city’s inability to capitalize on our strengths,” Cantrell said Monday, according to The Times-Picayune / The New Orleans Advocate. “It’s also made our people in New Orleans East feel like they were left out of the recovery, and not a priority. But no longer, no doubt about it.”

The Bayou Phoenix proposal would include multiple phases of development. The first phase envisions a warehouse and distribution center and an educational facility run by a local nonprofit called STEM NOLA. The second phase would include a water park, hotel and e-sports arena. Contracts should be signed within 90 days, and construction should start within a year, WVUE reported.

A group that included former Saints quarterback Drew Brees and current Saints linebacker Demario Davis also proposed an idea for developing the space but withdrew. However, the Cantrell administration announced it would work with that group to execute their plan for a logistics and transportation hub at a different location in eastern New Orleans.

The park opened in 2000 as Jazzland Theme Park, but it went bankrupt in two seasons. Six Flags took over the lease, but then Hurricane Katrina struck and flooded the park and much of the city. The theme park never reopened, and eventually Six Flags went bankrupt. Control of the property went to the Industrial Development Board of the City of New Orleans.