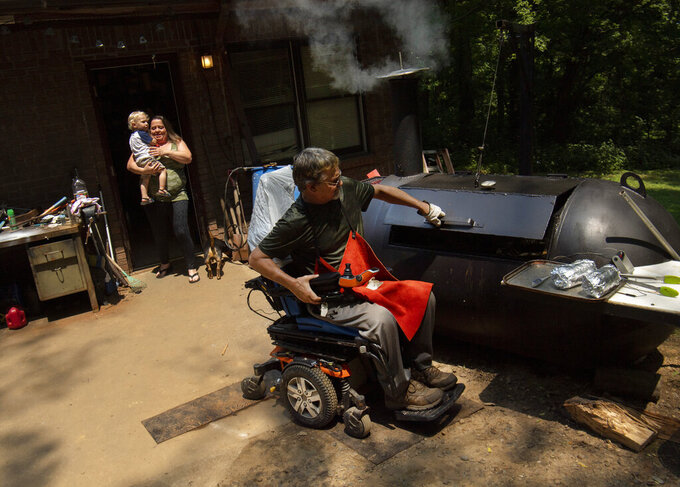 Denny Simmons, ASSOCIATED PRESS
Jennifer Howard retrieves grandson Xander from husband Bobby Howard's workshop at their Morganfield, Ky., home Wednesday afternoon, July 14, 2021, as Bobby was about to pull a couple rolls of smoked bologna from the custom smoker he created. Nearly 17 years after a car accident that left Bobby Howard paralyzed from the waist down, the Morganfield man still clings to an attitude that kept him going after it first happened. Whether he’s building a new barbecue smoker, modifying a vehicle to suit his needs or keeping up with his four grandchildren, any obstacle posed by his wheelchair or various health issues is just a new challenge to overcome. (Denny Simmons/Evansville Courier & Press via AP) 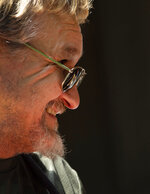 MORGANFIELD, Ky. (AP) — Nearly 17 years after a car accident that left Bobby Howard paralyzed from the waist down, the Morganfield man still clings to an attitude that kept him going after it first happened.

Whether he’s building a new barbecue smoker, modifying a vehicle to suit his needs or keeping up with his four grandchildren, any obstacle posed by his wheelchair or various health issues is just a new challenge to overcome.

His wife Jennifer calls him “stubborn.” His mother Lana calls him “determined.” But Bobby himself says that he is simply doing the best he can to not let his condition prevent him from being the person he’s always been.

Bobby says the car wreck on August 1, 2004 that changed his life forever was his responsibility and something he’s had to come to terms with over the years. He was on his way home in his future wife Jennifer’s new car, trying to get back in time so she wouldn’t be late for work.

“It was my fault,” Howard said. “I was speeding. I came around a curve too fast and there was another car there. It was nobody’s fault but my own.”

“He ended up upside-down in a ditch off the side of the road,” Jennifer recalled. “That was one bad day.”

That bad day has not changed the spirit of a man who loves the outdoors, tinkering with machines and cooking for friends and family.

“I decided that I just wasn’t done living,” he said. “Some people with this injury just give up on life and that wasn’t going to be me. I didn’t want to give up on fishing and hunting and all the stuff I’ve always enjoyed doing.”

One thing Bobby says could never change is his love of the outdoors. He continues to hunt, fish, garden and look for arrowheads and other artifacts he finds in the ground around his home. His freezer generally stays full with the meat of animals he’s harvested, usually deer.

He also enjoys cooking outside and recently built himself a custom smoker, welding and all. He did about 90% of the work himself and had a friend’s help for the rest.

“I couldn’t find one that was exactly what I wanted, so I decided to make it myself,” he said. “So one day I just went outside and started cutting it up.”

His knack for engineering things also extends to things on wheels. His truck was a manual transmission; without the use of his foot to work the clutch, he got creative.

“I was looking at a clutch assembly for a Harley-Davidson (motorcycle), and that was hand-operated,” he said. “So that got me to thinking it could work on my truck.”

The day after it was finished, he was off to Kentucky Lake in his new “contraption,” as Jennifer called it.

“Oh I was so worried,” she said. “I kept thinking I’m going to end up hearing about him on the news. But that’s just how he is. He’s stubborn, and whatever he’s doing he’s going to give it 100 percent.”

He drove the truck for several years after that.

“Well, I admit it probably wasn’t the safest thing on the road,” he laughs. “You couldn’t shift and hold the steering wheel at the same time. I’m sure the people at the motor vehicle office wouldn’t have been too thrilled. But I got around in it pretty well.”

Speed has always been a part of Bobby’s life, from cars to motorcycles and ATVs, and more recently a jet ski, which he was sad to give up because his dialysis port meant he couldn’t risk infection from getting in the water. He was hoping to get his hands on his father’s backhoe soon to level out some ground in his yard near the cooking area.

“I guess I used to be pretty wild,” he said. “I’d go fast, ride anything, jump over anything, It didn’t matter. I’ve had to slow down a lot. I can’t go very fast on my four-wheeler or anything because I can’t risk falling off. But I still like to drive things whenever I can.”

With no feeling in his legs, he’s broken bones and burned himself without even knowing it. He’s had congestive heart failure that he believes was caused by black mold in their home. His heart issue, combined with being on antibiotics for extended periods of time, led to kidney failures. He has been on dialysis for about three years, and because his heart’s performance is below a certain threshold, he is not eligible for a kidney transplant. He spends nine hours a night on a home dialysis machine and about 45 minutes during the day.

“I tried skipping the dialysis every now and then, and my body always pays for it the next day,” he said. “It’s not worth it.”

He has also had peritonitis twice; it nearly killed him the first time, his mother said. Many people with paralysis don’t survive one bout with peritonitis, much less two.

Bobby admits his famed stubbornness may also be partly to blame. He says he has since learned to be more aware of his body and has gotten better about getting to the doctor quickly when he realizes something is going on. But extended hospital stays come with consequences; he says he usually has a hard time getting his strength back after he’s been in a hospital bed for a while.

“I just didn’t want to go to the doctor,” he said. “I was so swollen with fluid retention that I gained 48 pounds, and I couldn’t breathe, couldn’t sleep at night.”

He’s had his gall bladder removed. He also had to get a pacemaker, which developed not one, but two bad leads and started shocking him – a total of 13 times, so much that it sent him into atrial fibrillation.

“First time it happened, it felt like somebody came up behind me and hit me in the head with a baseball bat or something,” he said. “The next day, I was in surgery. They capped off the two leads and it’s been fine ever since.”

He’s broken his hip and broken his leg twice. Staying active with paralysis is a double-edged sword, because sometimes he can’t tell when he’s pushed his body beyond its limits. That’s how his leg got broken the first time.

“I was leaning down reaching for something, and I reached too far,” he said. “I knew something was wrong because my leg was spasming and jumping around. I tried to get (Jennifer) to pop it back in place. Then the whole leg turned blue and I knew I had to get to the hospital.

Then, this past year, he ended up with COVID-19. He still loses his sense of taste and smell occasionally, but otherwise came through it OK.

“I figured it would be a life or death situation if I got COVID,” he said. “And sure enough I got it. I was being careful, and I still got it anyway.”

The Howards, somehow, find a way to laugh at his series of medical mishaps and adventures. At some point, they say, you can’t help but occasionally giggle at the absurdity of some of the things that have happened to him.

“I don’t like to sit around talking about my problems and all that,” he said. “But I guess sometimes you have to laugh at some of it. Seems like there’s a new challenge almost every day.”

Once, he fell out of his car at the bottom of a hill outside his house and literally had to claw his way back up the hill. He’s gotten his wheelchair stuck in loose gravel and had to wait over an hour in the heat for someone to come along and help him out.

“I don’t get off without my phone anymore,” he laughed. “Crawling around in the dirt isn’t much fun.”

Figuring out how to live with his condition has been a long ride, but the Howards say now that things have stabilized a little, they have the chance to do more and more things.

They recently went on a vacation to Branson, Missouri and hope to go to Alaska sometime in the near future. Those trips don’t come without obstacles — like finding room in the car for a week’s worth of dialysis solution and other needed supplies — but it’s well worth the trouble, they say.

“I’ve seen a lot of people with the same injury just sit around waiting for their next pain pill,” he said. “I could never do that. I’m not trying to say I’m better than anybody else, but to me that’s not living.”

He said he has been asked to talk to other people with paralysis to show them they can do more. While he’s always willing to try, he says, he doesn’t think it’s very effective.

“I think it’s just a personal choice,” he said. “You can sit around feeling sorry for yourself, waiting for your next pill or waiting to die. Or you can start trying to help yourself. Nobody else can make that decision for you.”

Bobby says he will continue to do things for himself as long as he is remotely capable. He doesn’t feel the need to prove himself; he just likes to do things his own way.

“I am capable of doing a lot of things,” he said. “If I need help, I don’t have a problem asking, but most times I’d rather do it myself. The more I can do myself, the better off my body is, because it keeps my strength up and keeps me in the habit of doing things. If I’m feeling 50 percent on a given day, I’m going to be out there doing something; I just don’t like sitting around.”