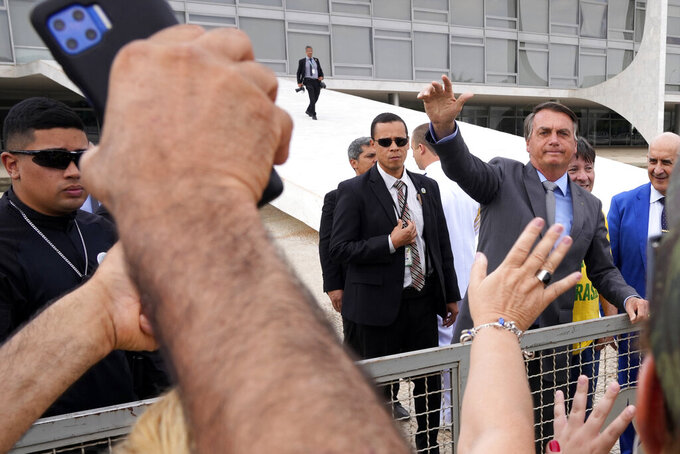 RIO DE JANEIRO (AP) — Supporters of President Jair Bolsonaro broke through police roadblocks Monday night that had sought to prevent access to the capital's central mall on the eve of a demonstration scheduled to coincide with Brazil's Independence Day.

The Federal District's security secretariat said in a statement that officers had been deployed in an effort to control the situation. Video shared on social media showed trucks progressing while blaring their horns as hundreds of people dressed in the national green-and-yellow colors walked alongside and cheered.

Bolsonaro has been working to mobilize his biggest nationwide street demonstration yet and project strength following a string of setbacks, particularly at the hands of Brazil's Supreme Court. But it carries risk of embarrassment if crowd numbers fall short or if there is violence perceived as stemming from the president’s influence.

Forced entry into the mall, called the Esplanade of Ministries, heightened a sense of alert ahead of Tuesday’s demonstration, which some analysts have warned runs a risk of resembling the Jan. 6 riot at the U.S. Capitol. For over a month, Bolsonaro has been aiming his ire at two of the top court’s justices in particular.

As of late Monday, Bolsonaro supporters had reached the opposite end of the mall, where police stood guard behind metal barricades outside the Congress and the Supreme Court.

Convoys of trucks and busses have been streaming toward the capital of Brasilia and Brazil’s biggest city, Sao Paulo, where the nation’s two biggest demonstrations are set to take place Tuesday and Bolsonaro will speak.