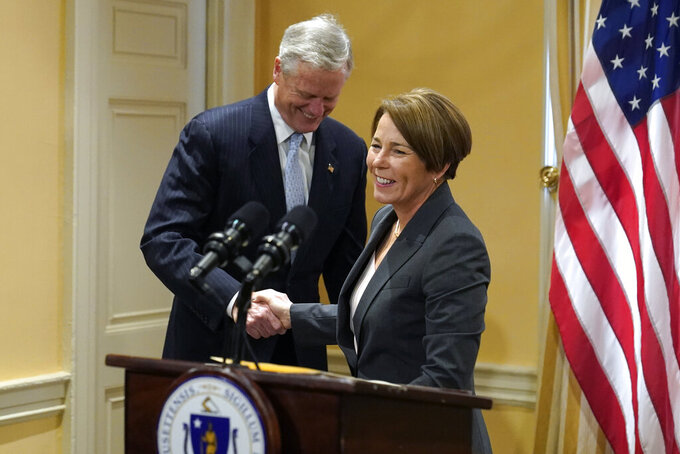 Steven Senne, ASSOCIATED PRESS
Republican Mass. Gov. Charlie Baker, left, shakes hands with Massachusetts Democratic Attorney General Maura Healey, right, at the start of a news conference, Wednesday, Nov. 9, 2022, at the Statehouse, in Boston. Hours after she was elected governor of the state Healey met with Baker at the Statehouse to discuss the upcoming transfer of power. (AP Photo/Steven Senne)

BOSTON (AP) — Hours after she was elected governor of Massachusetts, Democratic Attorney General Maura Healey met with Republican Gov. Charlie Baker at the Statehouse to discuss the upcoming transfer of power.

Healey's election made history. She is the first woman and the first openly gay candidate elected to the top office in Massachusetts. She is also the country’s first openly lesbian candidate to be elected governor.

Baker, who opted not to seek a third term, congratulated Healey on her win. Baker, who declined to endorse the Republican candidate in the governor’s race, said Healey and her running mate, Salem Mayor Kim Driscoll, ran a smart campaign.

Baker said he would do what he could to smooth her administration’s transition into the governor’s office.

“We have been planning for this transition for several months," Baker said Wednesday afternoon after meeting with Healey.

Baker said key officials in his administration are prepared to sit down with representatives of Healey's future administration to discuss everything from winter weather preparedness to the state budget.

Baker said one of the most important things he looked for when he was coming into the governor’s office eight years ago was access to individuals in key roles in the prior administration to find out what their major concerns were.

“They are the ones who will be able to tell you both at a conceptual level and also at a detail level what keeps them up at night,” he said.

Healey said her administration is willing to work with everyone and has created a new transition website.

“People have given us a mandate not just to act, but to deliver results," she said.

Healey thanked Baker for the offer to help with the transition.

“I think we have a lot of mutual respect for one other. Obviously we share some similarities, we share some differences,” she said. “At the end of the day, it’s going to be matter by matter, issue by issue.”

Asked how a Healey administration would be different from a Baker administration, Healey joked that the “microphones are going to be a little lower.”

Baker stands at about 6 feet 6 inches tall compared to Healey, and ex-baskedball player, who is about 5 feet, 4 inches tall.

Healey will be sworn in as governor at noon on Jan. 5.

Baker said Massachusetts is in strong fiscal shape. He said the state's rainy day fund is on track to top more than $8 billion.

Asked what kind of advice he would give Healey and Driscoll, Baker said he would urge them not to spend too much time ensconced on Beacon Hill.

“Get out of the building and spend time with the people of Massachusetts. I consider that to be the greatest gift that I’ve been given certainly over these last few years," he said. “There are a lot great people in this state doing a lot of really interesting things, and this position gives you a front row seat to a lot of that.”

Healey said in the interim she is still attorney general and will continue that work and help with the transition in her office for the incoming attorney general, Democrat Andrea Campbell, the first Black woman elected to the top law enforcement post in Massachusetts.