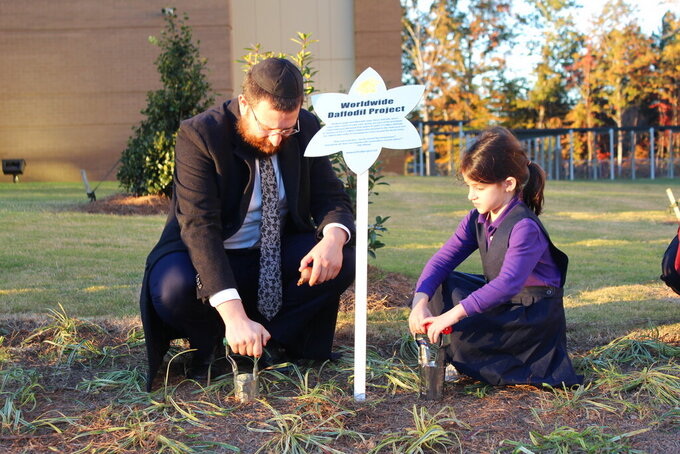 They planted the bulbs outside of the school district’s new Forsyth County Arts and Learning Center as part of the Daffodil Project, a worldwide initiative aiming to plant daffodils all over in honor of each of the 1.5 million children who died during the Holocaust.

Thanks to their partnership, Forsyth County will now be home to 500 of those daffodils, which will bloom in the spring on Holocaust Remembrance Day.

Cook said she was proud to be there, speaking on behalf of OneForsyth, the Forsyth County Chamber of Commerce’s diversity initiative, and modeling their guiding principles of uniting, celebrating and promoting inclusion in the county.

“Our hope is that, by continuing to support events like these, we will all grow to appreciate the unique identities that embody us all,” Cook said.

Metz said he was overjoyed to see the project coming to Forsyth County, his involvement feeling personal to him and his family as his grandfather was a survivor of the Holocaust.

His grandfather was first taken with his family to a Warsaw ghetto in 1939. He later lived through six different concentration camps and was able to build a family after the war. During that time in the ghetto, though, Mentz said his grandfather faced difficult decisions in what would be the beginning of a long, devastating time in his life.

At the time, Mentz said families living in the ghetto were given cards which were used in exchange for food, and families were never given enough to really sustain themselves.

Because of this, many were forced to find ways to get more cards. His grandfather’s older brother “did whatever he could” to collect more and feed their parents, who were older and needed the food.

“After doing this for many months, he was finally noticed by an SS soldier,” Mentz said.

The soldier ordered for him to be shot and killed at the back of the ghetto, but thanks to a family member who befriended another SS soldier, he was instead sent away to a labor camp.

Mentz’ grandfather was the next oldest brother in their family still in the ghetto with his parents. He had to ask himself if it would be worth potentially risking his own life to feed those he loved.

“I share this with everyone today because why did my grandfather, together with millions, have to go through something like this?” Mentz asked. “It’s for one reason — because the Nazis felt that the Jewish people were different.”

Mentz hopes that people today can learn from those mistakes made then, knowing now that, on the inside, “all of us are the same.” He said our differences on the outside just make us that much stronger as a united society.

The Daffodil Project chose to honor those children who died in the Holocaust with daffodils because, as they bloom, the flowers resemble the Star of David. They also represent “poignant hope for the future,” according to the project’s website, at www.daffodilproject.net.

As the daffodils in Forsyth County first begin to bloom in the spring, FCS, Congregation Beth Israel and OneForsyth plan to hold another ceremony to read the names of and honor those who lost their lives.

“We realize that, in our unity, we are stronger,” Mentz said.