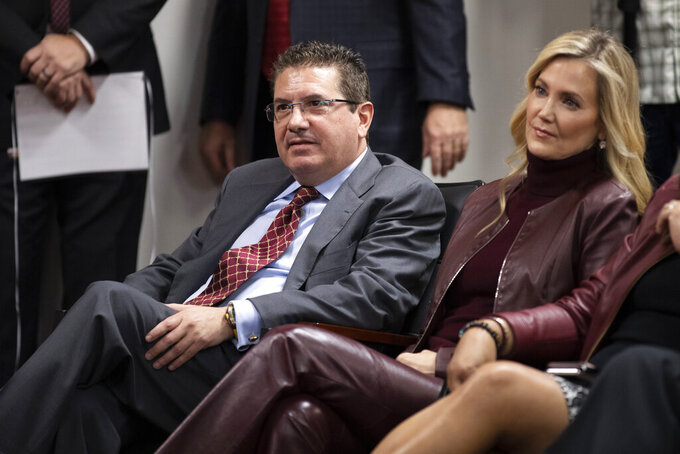 Alex Brandon, ASSOCIATED PRESS
FILE - Washington Redskins owner Dan Snyder, left, and his wife Tanya Snyder, listen to head coach Ron Rivera during a news conference at the team's NFL football training facility in Ashburn, Va., in this Thursday, Jan. 2, 2020, file photo. Few NFL teams have managed to lose as much as Washington has since Daniel Snyder was part of a group that purchased the franchise for a then-record $800 million in 1999. (AP Photo/Alex Brandon, File)

Dan Snyder’s ownership of Washington’s NFL franchise has been a matter of considerable debate for years.

Some has centered around a lack of success on the field: two playoff game victories since he bought the team in 1999.

Recent events have put more heat on Snyder away from football, with a series of scandals and investigations that have spanned three different names for the team. The latest development: District of Columbia Attorney General Karl Racine announced Thursday that his office is filing a consumer protection civil lawsuit against Snyder, the Commanders, the NFL and Commissioner Roger Goodell. At a news conference, Racine said, “The evidence shows Mr. Snyder was not only aware of the toxic culture within his organization, he encouraged it and he participated in it."

A look at what has brought Snyder to this point:

Amid a national reckoning over racism in the wake of the George Floyd protests, prominent sponsors FedEx, PepsiCo, Nike and Bank of America called on the team to abandon its old name, which Snyder long vowed never to do. The team launched a review and on July 13 announced it was giving up the name after 87 years.

Three days later, the Washington Post reported that 15 female former employees said they were sexually harassed during their time with the team.

The team retained attorney Beth Wilkinson's firm to undertake an independent investigation into workplace conduct, which the NFL then took control of overseeing.

The next day, Snyder vowed to improve the culture inside the organization, and the league said it would wait for Wilkinson's review before taking any action.

A week later, the club rebranded temporarily as the Washington Football Team, a name that lasted two seasons.

The Post reported additional examples of workplace sexual harassment inside the organization, along with allegations that Snyder was personally involved.

The Post reported a former cheerleader saying Snyder invited her to a hotel room with one of his friends, and that longtime team executive Larry Michael made extra cheerleading videos for the owner showing sensitive material that wasn’t made public. Snyder released a statement denying those specific allegations and saying he was unaware of the incidents.

Minority owners Fred Smith, Dwight Schar and Bob Rothman, whose shares added up to 40.5% of Washington Football Inc., sued Snyder in federal court in Maryland seeking an injunction to allow them to sell their shares of the team.

At his pre-Super Bowl virtual news conference, NFL Commissioner Roger Goodell praised the organization, which he said “has made a lot of changes already.” That included hiring Jason Wright as team president in August.

Goodell said it was good to see those changes, and added he expected Wilkinson’s recommendations would add to them.

Weeks later, 20 former employees wrote a letter to Goodell, asking the league to release the final report of the investigation when it was completed.

In late March, Snyder bought out his minority owners, a move that gave his family total control of the team. Snyder’s application for a debt waiver of $450 million was approved by the league’s finance committee and then ownership at-large to make it official.

The NFL fined the team $10 million and said Snyder would step away from day-to-day operations for several months after Wilkinson’s investigation found Washington’s workplace to be toxic and unprofessional, especially for women.

The team did not lose any draft picks, and no formal suspensions were handed out. The league said Snyder’s wife, Tanya, would assume formal operations while he worked on long-term issues such as the search for a new stadium.

No written report was released.

Amid calls from former employees for the NFL to release the findings of Wilkinson’s investigation, members of the U.S. Congress got involved.

A couple of weeks later, the pair of representatives urged the NFL and the team to release individuals from non-disclosure agreements that would prevent them from discussing sexual harassment and workplace issues at the club.

In December, after the Post reported Snyder hired lawyers and private investigators that witnesses viewed as attempts to interfere with the investigation, Maloney and Krishnamoorthi asked the league to provide evidence and said, “These disturbing revelations have only strengthened the Committee’s commitment to uncovering the truth in this matter.”

The House Oversight Committee announced Jan. 27 it would hold a roundtable discussion the following week with former employees to discuss workplace misconduct and sexual harassment.

Washington unveiled its new name as the Commanders on Feb. 2.

During the roundtable the following day, one of the former employees came forward with a new allegation she was sexually harassed by Snyder himself, which he denied. Tiffani Johnston, who worked for the team for eight years starting in 2002 as a cheerleader and marketing manager, told the committee Snyder placed his hand on her thigh without her consent at a team dinner and that he pushed her toward his limousine with his hand on her lower back.

The committee continued to push for the full release of the Wilkinson report, asking Goodell to release the full findings by Feb. 14 and threatening “alternate means of obtaining compliance” if he did not cooperate.

At the Super Bowl in Los Angeles, Goodell defended the NFL's use of an oral, not written, report, saying it was done to protect the identity of anyone who wanted to speak to investigators privately, also saying the league would take over an investigation into the new allegation of sexual harassment made against Snyder.

The league hired former U.S. Attorney and Securities and Exchange Commission chair Mary Jo White to investigate, vowing the results would be released in written form because the allegation was made in a public forum.

The House Oversight Committee told the Federal Trade Commission the team may have engaged in potentially unlawful financial conduct, and the NFL said it would look into the most serious allegations.

The committee said it found evidence of deceptive business practice over the span of more than a decade, including withholding ticket revenue from visiting teams and refundable deposits from fans. A league spokesman said White would review the alleged improprieties, which the team denied a week later in a lengthy letter to the FTC.

On June 1, the committee invited Snyder and Goodell to appear at a hearing on workplace culture around the NFL scheduled for later in the month, which it called the next step in the investigation.

Two weeks later, a lawyer representing Snyder said he would not testify. Among the reasons given were a lack of assurance about the scope of questioning given the existence of multiple ongoing investigations and a scheduling conflict preventing Snyder from appearing in person.

On June 9, the Virginia General Assembly abandoned for the rest of the year a stadium deal that would have brought the Commanders' games to the state. The legislation offering hefty tax incentives had already been languishing amid a series of controversies involving the team when an assistant coach called the Jan. 6 insurrection at the Capitol “a dust-up.”

Goodell testified virtually on June 22, and the committee released a document accusing Snyder of conducting a “shadow investigation” that sought to discredit former employees making accusations of workplace sexual harassment, hired private investigators to intimidate witnesses and used an overseas lawsuit as a pretext to obtain phone records and emails.

Asked by one member of the committee whether he would remove Snyder as Washington’s owner, Goodell responded, “I don’t have the authority to remove him."

An NFL owner can only be removed by a three-quarters majority vote of the other owners.

After wrangling between his legal team and the committee over the parameters of his testimony, Snyder agreed to appear virtually.

Snyder testified for more than 10 hours on July 28. A spokesperson for Snyder said he “fully addressed all questions about workplace misconduct, described the Commanders’ dramatic two-year transformation and expressed hope for the organization’s bright future.”

ESPN released a lengthy report detailing Snyder’s efforts to influence other owners and the league office to maintain control of the team.

Days later, at the NFL owners' meetings in New York on Oct. 18, Indianapolis Colts owner Jim Irsay said there was “merit to remove” Snyder — the first public statement by one of Snyder's counterparts that he should go.

During Washington's next game, at home against Green Bay, spectators shouted “Sell the team!” when Tanya Snyder was shown on a video board.

The Snyders took the first step toward potentially selling the Commanders: The club announced on Nov. 2 that a financial services firm had been hired to “consider potential transactions.” Asked if the Snyders were considering selling part or all of the team, which is worth billions of dollars, a spokesperson said, “We are exploring all options.”

Eight days later, the D.C. attorney general made public his investigation, which he said began in the fall of 2021. As for whether Snyder can avoid the civil suit by ending his ownership, Racine said: "If he sells the team, he’s still a defendant.”

The investigations by White and Congress remain ongoing. The team still does not have a deal for a new stadium and ranks last in the NFL in average home attendance.