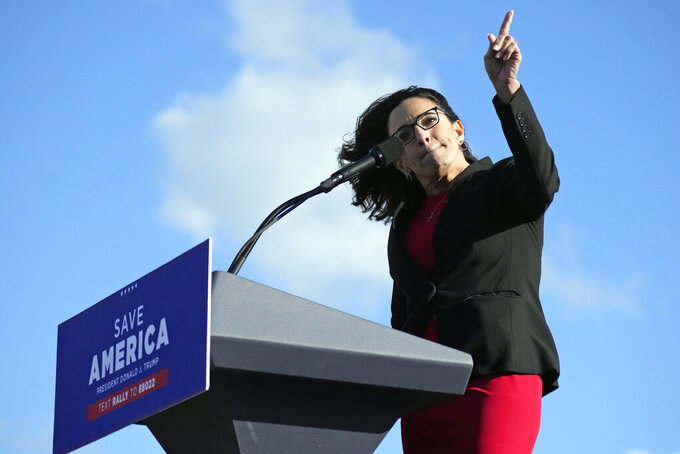 COLUMBIA, S.C. (AP) — In one of the year's most closely watched congressional Republican primaries, U.S. Rep. Nancy Mace met two GOP challengers on the debate stage who are seeking to oust her from South Carolina's 1st Congressional District, one of whom immediately endorsed the other, before walking off stage.

In the Monday night matchup in Charleston, slated to be the only debate for Mace, Katie Arrington and Lynz Piper-Loomis ahead of the June 14 primary election, Piper-Loomis answered her opening question by saying she would be supporting Arrington before removing her mic and leaving the debate.

With Piper-Loomis having been unable to attract significant fundraising, her departure now makes official the two-way contest that had already been largely shaping up between the freshman Mace and Arrington, a former Defense Department cybersecurity expert who is making her second run for the seat. In 2018,

Arrington notably knocked U.S. Rep. Mark Sanford out of the GOP primary, going on to lose the general election to Democrat Joe Cunningham, who became the first of his party in decades to flip a South Carolina House seat.

Mace, who ousted Cunningham in 2020 to become the first Republican woman elected to Congress from the state, has supported issues largely popular among conservatives, like transgender athlete bans, but has also backed bipartisan efforts, like the decriminalization of marijuana.

On Monday night, Mace and Arrington faced off on offshore drilling, the issue that was a hallmark of Arrington's losing 2018 bid, during which she argued both in favor of and against the practice.

“If there was oil off our coasts, there would be rigs, they would have been there a long time ago,” Arrington said, asked if she supports drilling off South Carolina’s coast. She then tilted her answer toward criticism of the Biden administration for degrading the “energy independent" and "energy dominant” era of the Trump administration.

“This was a major issue in why we lost the seat to begin with,” Mace pointed out in her answer, noting that Arrington campaigned in support of offshore drilling during her 2018 primary but walked back the sentiment during the general election campaign against Cunningham, a staunch drilling opponent.

“I’ve always been against off shore drilling,” added Mace, who has cosponsored legislation to end it.

Arrington several times mentioned her endorsement from Trump, who solicited challengers to run against Mace following her vote to certify President Joe Biden’s win in the 2020 election and frequent television appearances blaming Trump for the Jan. 6 insurrection.

Mace, who had Trump's backing in 2020, filmed a video of herself in front of Trump Tower after the former president endorsed Arrington, saying her opponent was “more than qualified” to lose the seat to Democrats for a second time and casting herself as best suited to represent the district's “fiscally conservative values.”

She also reminded voters she was among Trump's “earliest supporters” in 2016, when she worked for his campaign.

On Monday, Mace rarely mentioned the former president, though at one point she called him “one of the greatest presidents of all time in protecting animal rights,” after Arrington questioned Mace's sponsorship “as a fiscal conservative” of animal rights legislation.

Both Piper-Loomis and Arrington feel that the 2020 election was stolen from Trump, a sentiment expressed by many of the candidates across the country to receive his backing.

State electoral officials and courts throughout the country, however, found the Trump campaign’s complaints systematically groundless and certified the election as fair and legitimate.

During a March South Carolina rally, Trump called Mace “a terrible person” who “has no idea what she’s doing."

“You won this seat because President Donald J. Trump endorsed you,” Arrington said Monday, after Mace touted her winning the seat back from Democrats in 2020. “We need to hold the line.”

“I am conservative before I am Republican, and I have the record to back it up,” Mace said in response to Arrington's allegation she works too much with Democrats. “My opponent simply can't tell the truth, and maybe it's she just can't handle the facts.”

Mace had amassed a campaign war chest of more than $3.8 million as of the end of March, nearly $1 million of which came in the weeks after Trump backed Arrington. In the first quarter, Arrington said she brought in around $814,000, $525,000 of which was in the form of a personal loan from herself.

The winner of the 1st District GOP contest will go on to face Democratic nominee Dr. Annie Andrews, who faces no primary opposition, in November.