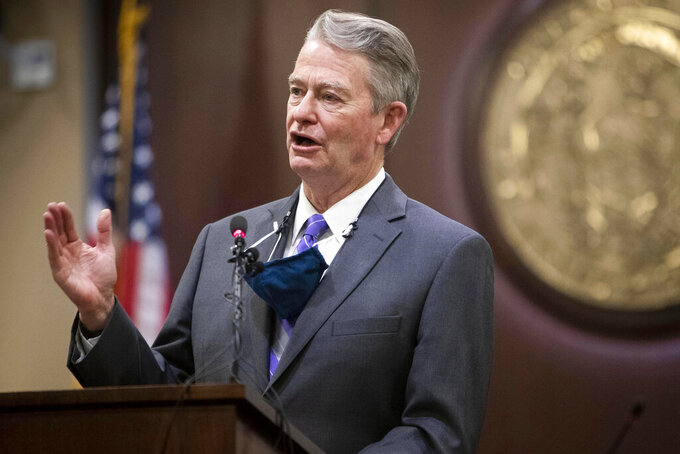 Darin Oswald, ASSOCIATED PRESS
FILE - In this Oct. 1, 2020, file photo, Idaho Gov. Brad Little gestures during a press conference at the Statehouse in Boise, Idaho. Gov. Little has signed onto an amicus brief in a case before the U.S. Supreme Court that could overturn the court's landmark 1973 ruling that legalized abortion nationwide. The Republican governor on Thursday, July 29, 2021, joined Republican governors from 11 other states in supporting a Mississippi law that would ban abortion at 15 weeks. (Darin Oswald/Idaho Statesman via AP, File)

BOISE, Idaho (AP) — Idaho Gov. Brad Little on Thursday signed onto an amicus brief in a case before the U.S. Supreme Court that could overturn the court’s landmark 1973 ruling that legalized abortion nationwide.

He joined Republican governors from 11 other states in supporting a Mississippi law that would ban abortion at 15 weeks. The law would allow exceptions in cases of medical emergency or severe fetal abnormality.

The Mississippi case is the first big abortion-rights test in a Supreme Court reshaped with three conservative justices nominated by then-President Donald Trump.

“Protecting the lives of preborn babies has always been and will continue to be a priority of mine," Little said in a statement that also touched on states' rights. "I am asking the U.S. Supreme Court to clarify there is no constitutional right to an abortion and restore state sovereignty by allowing states to regulate all abortions consistent with the principles of democratic self-governance.”

The court's 1973 Roe v. Wade decision and its 1992 decision in a Pennsylvania abortion case said states may not put an undue burden on abortion before viability. If those rulings are overturned, as Mississippi officials argue they should be, states would decide whether to regulate abortion before a fetus can survive outside the womb.

The Mississippi 15-week law was enacted in 2018, but was blocked after a federal court challenge.

A 6-3 conservative majority of the U.S. Supreme Court said in May that the court would consider arguments over the Mississippi law. Justices are likely to hear the case this fall and could rule on it in the spring.

The 11 other states whose Republican governors also signed onto the amicus brief in support of Mississippi are Montana, Texas, Florida, Arizona, Iowa, South Carolina, Alabama, Arkansas, Georgia, Missouri and Oklahoma.

Planned Parenthood Alliance Advocates, a group that describes itself as protecting and promoting reproductive health in Idaho, Washington and four other states, condemned Little's decision to join the amicus brief.

“Idaho politicians claim to support individual freedoms, while ruthlessly attacking the right of a pregnant person to access the full spectrum of safe and legal reproductive health care," Mistie DelliCarpini-Tolman, the group's Idaho director, said in a statement. “Despite these attacks, we want our patients and the public to know that our doors stay open. Abortion is still legal, and safe, everywhere in the United States and we will continue to fight to keep it that way and to expand access.”

In a related matter, Little in April signed into law legislation that would outlaw nearly all abortions in Idaho by banning them once a fetal heartbeat can be detected. That law contains a “trigger provision,” meaning it won’t go into effect unless a federal appeals court somewhere in the country upholds similar legislation from another state.

Fetal cardiac activity can be detected as early as six weeks using an invasive vaginal ultrasound — before many women know they are pregnant.

The measure makes providing an abortion to a woman whose embryo has detectible cardiac activity punishable by up to five years in prison. It would also allow the woman who receives the abortion to sue the provider.

Backers of the Idaho law have said their intent is to get a legal challenge to the law before the U.S. Supreme Court.