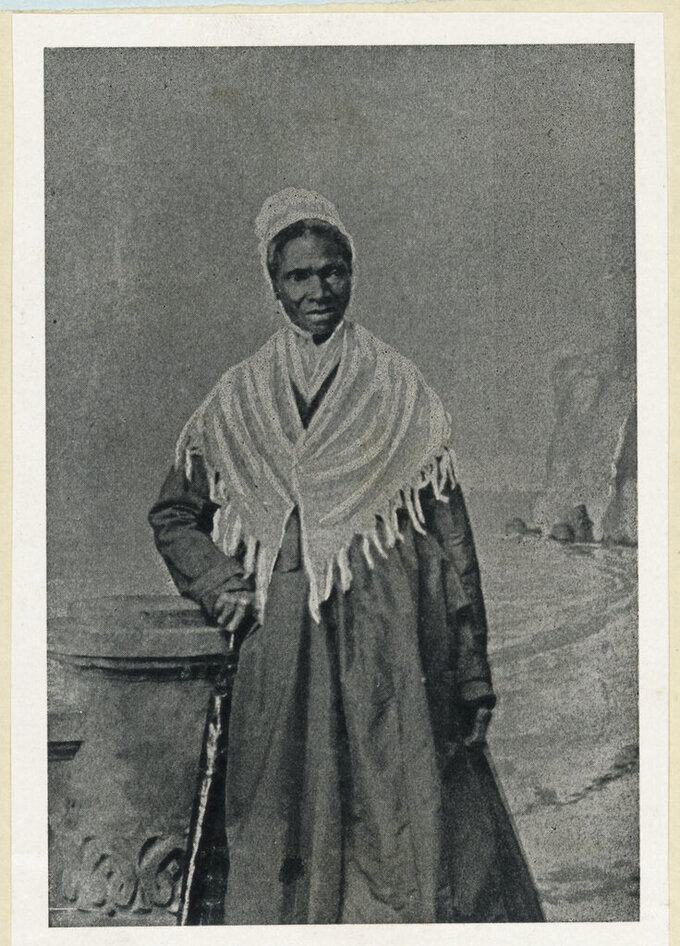 HONS, ASSOCIATED PRESS
This undated photo from the Library of Congress shows Sojourner Truth, a Black woman who had escaped slavery with her infant daughter. Recently uncovered court documents from 1828 related to the noted abolitionist were spotted in January by an eagle-eyed New York state archivist. The court papers from her successful court fight to reunite with a son sold to slavery will briefly be on public display Wednesday at the Ulster County Courthouse in Kingston, New York, the same building where she brought her case. (Library of Congress via AP)

In 1828, years before she took the name Sojourner Truth, a Black woman who had escaped slavery with her infant daughter won a court fight in New York’s Hudson Valley to bring her son, Peter, home from Alabama.

It was a historic case of a Black woman seeking the release of her son from slavery prevailing in court against a white man. Isabella Van Wagenen, as she was known then, would gain enduring fame as an outspoken abolitionist and women’s rights advocate. As for her deposition and the rest of the court documents, they were boxed up and eventually stored among a million other records, unseen and unrecognized for their significance.

An eagle-eyed state archivist searching for something else spotted the court records in January. Now, they will briefly be on public display Wednesday at the Ulster County Courthouse in Kingston, New York, the same building she walked into almost two centuries ago seeking justice. The eight hand-written pages offer new details about a significant turning point in her eventful life.

“This was extremely brave of Isabella,” said Nell Irvin Painter, author of “Sojourner Truth: A Life, A Symbol.” “Just the fact that she was a woman going up against powerful men, that’s extraordinary right there. And then you add in race, and then you add in class. So it’s an amazing story.”

Painter will be among the people in Kingston on Wednesday, eager to glimpse the historic documents found by happenstance.

For the past 40 years, the papers have been safely, if anonymously, stored at the climate-controlled New York State Archives in Albany. They were uncovered there by Jim Folts, head of researcher services at the archives, who had been looking for habeas corpus examples from that era for a history book on New York's courts.

Combing through boxes of documents, he found one from 1828. It had a woman's name on it, which was unusual for the time. Interest piqued, he read the yellowed paper and saw the woman, Isabella Van Wagenen, was trying to recover her son from slavery.

“That rang the bell,” Folts said recently in an interview at the archives, “because Isabella Van Wagenen was then the name of the person who became known as Sojourner Truth.”

Researchers compare the surprising find to coming across missing puzzle pieces. Though Truth later recalled that the event happened in open court in the autumn of 1828, court papers indicate it happened that spring, and not in open court, Folts said. In her brief deposition, she said Peter was 9 years old.

“We always wondered, ‘Where were these records?’” said Paul O’Neill, Ulster County's commissioner of jurors.

The documents are written in the same sort of lawyer-speak still used in courts today, including Van Wagenen's testimony. She could neither read nor write, but left a simple “X” on the page by her name.

“This is her DNA left behind on this document. The rest is legalese and all of that,” said State Archivist Thomas Ruller, pointing at the mark on the page. “This is Sojourner Truth, this is where she shows up in this story.”

Born into slavery in or around 1797 in the Hudson Valley, she walked away from the home of her final owner in 1826 with her infant daughter after he reneged on a promise to free her. She went to work for the Van Wagenen family, and took their surname.

Meanwhile, her son Peter was sold into slavery in Alabama. The sale occurred during the gradual phase out of slavery in New York, where Peter would have been an indentured servant until he was older. But the sale of Peter to another state was illegal.

Faced with the prospect of never seeing him again, she went to court in Kingston to get him back. Painter said she relied on two lawyers allied with her and her faith in the Holy Spirit.

A grand jury proceeding was apparently enough to prompt the man who sold Peter to have him sent back to New York. But it was her application for a writ of habeas corpus that led to them being reunited. A Supreme Court Commissioner, acting with powers of a judge, ordered Peter freed March 15, 1828.

It was believed to be the first time a Black woman successfully sued white men to get her son released from slavery, though it's possible there were other cases researchers are unaware of.

It was a bittersweet reunion. Peter's body showed evidence of beatings and it took the traumatized child time to accept his mother. Peter did not have an easy life, Painter said.

“He ended up, as many troubled young men did at that time, on a Nantucket whaling vessel, and he was finally lost at sea,” Painter said.

Van Wagenen took the name Sojourner Truth in 1843 and lived another 40 years.

The court papers from that day were shipped north to Albany. They were transferred to the newly founded Court of Appeals in 1847 upon a reorganization of the state court system, and stayed at New York's top court for more than a century. The records came to the state archives in 1982, stored in anonymity until Folts' serendipitous discovery this winter.

“There are thousands of these boxes, millions of these documents,” Ruller said. “And many of them will contain the stories of other individuals who may not be as well known or well heard of. But their stories are just as important.”