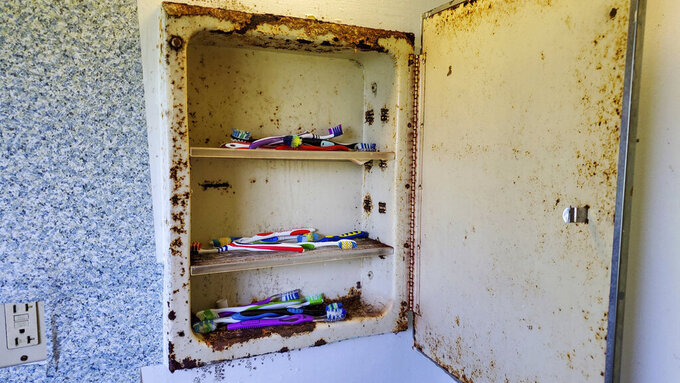 Shamsa Mada points to her kitchen ceiling, dotted with mold and bubbling paint and stains that reveal signs of a leak from the upstairs bathroom.

Off to her left she signals to where a door fell from a bottom cupboard stocked with food.

Her stove, in the unit where she lives with her husband and eight children, was broken for nearly a year, she said. Only after calling the police to report the smell of natural gas did it get fixed.

At the top of the staircase, her bathroom walls are partly covered with contact paper that she put up to combat the pervasive black mold. A bucket on the kitchen floor below catches water that drips through the ceiling when someone showers.

“You call, and nobody coming,” said Ms. Mada, a Somali Bantu refugee who lives at the Northview Heights public housing complex where she moved in 2014 after rents became too expensive across town in Lawrenceville.

The Housing Authority of the City of Pittsburgh has long touted safe and clean facilities, but the breakdowns in the homes — filthy air vents, crumbling stairways, busted pipes, and mold — tell a different story of government housing and what’s gone wrong with one of the oldest public agencies in the city.

In just three years, more than half the developments owned and managed by the authority have failed inspections at a time when the vast majority of facilities across the nation have passed, the Pittsburgh Post-Gazette has found.

In at least a third of the cases, the local buildings have failed multiple times during the past three years, according to the U.S. Department of Housing and Urban Development.

For residents, the reality of living in places like Bedford Dwellings and Homewood North can mean leaking toilets, mold, and a lack of air conditioning for days at a time, posing health risks for some of the authority’s most vulnerable residents.

At Northview Heights, a housing development with 538 units on Pittsburgh’s North Side, residents complained to the Post-Gazette about mold throughout the facility — a deficiency found in more than half the 26 units sampled in the most recent inspection.

In one unit, the water leaks were so severe, the residents found — and took photos of — mushrooms growing from the ceiling.

The Post-Gazette examined hundreds of pages of records — including inspections and performance scores of facilities dating to 2001 — and conducted interviews with dozens of residents, advocates and agency officials.

The PG found that of the 17 housing developments owned and run by the agency, 10 failed their most recent inspections for a range of problems that residents say can take months to get repaired.

The failed developments contain about 2,000 apartments, more than three quarters of the units managed by the authority.

Housing advocates with Pittsburgh United say the deficiencies represent deeper underlying problems that should have been addressed years ago.

“All these issues are not just about comfort, but about safety and health,” said Jennifer Rafanan Kennedy, the organization’s executive director.

The failures come as the need for affordable housing continues to mount in a city where thousands of people are on waiting lists for subsidized units and vouchers, and as living costs rise to new levels.

The breakdowns are also happening as the housing authority pushes toward demolishing older complexes and putting up modern, mixed-income communities — a larger trend in public housing that’s been unfolding for decades.

The authority says the new push is a way to help modernize housing and move away from the longstanding pattern of isolating and separating income groups.

At least eight of the older complexes have either been leveled, rebuilt, or have changed management.

But some residents who have lived in the older developments for years say the housing agency has failed to care for places that have been standing since the mid-20th century and still house thousands of people.

Caster Binion, executive director of the housing authority, defended the oversight of the buildings under the agency’s control, saying the failed inspections are not because of any management issues, but rather the age of the facilities.

“(That’s) the difference between the units built in the last 10 years versus the units that have been built 50 years ago,” said Mr. Binion, who has led the authority since 2013.

He also placed part of the blame on residents, who, he said, often do not report issues such as mold to managers and sometimes damage their own apartments.

“If they report it, I take responsibility for that,” he said. “The system is designed to inform us when you have a problem…If we’re notified about stuff in a timely manner, we will abate. If you have a problem with your toilet, instead of getting a plunger, you call the housing authority. If you need a light bulb, we’ll come out and put up a light bulb.”

Before the pandemic, the turnaround times averaged five to 21 days for non-emergency calls, according to the agency. But because of staff and health concerns during the crisis, the times have slowed to 35 days.

U.S. Housing and Urban Development officials acknowledged the age of a building can make a difference in inspection scores but that failures still present issues for the authority to fix.

“HUD is concerned any time a property receives a failing score,” an official said.

While Mr. Binion blamed the age of the buildings for the poor reviews, records show that roughly 90% of public housing developments across the country have passed their inspections — a far higher percentage than Pittsburgh’s pass rate.

At least a half dozen residents interviewed by the Post-Gazette said the response times took anywhere from weeks to more than a year for problems to be resolved.

One couple in Bedford Dwellings — rows of identical brick buildings that opened in 1940 — said they’ve been living for at least four months in a unit with no working toilet, using buckets of water to flush the commode.

The Post-Gazette visited four of the older facilities — including the two largest in the city — and found door locks not working, dirty stairwells, and stained and blistered ceilings from leaking water.

In Bedford Dwellings, a concrete and metal stairway leading to the second floor was so badly deteriorated that it was propped up with rusted jacks.

In Arlington Heights, a faded jungle gym has been so covered by weeds that several parents said they won’t let their children play on it.

“It’s so sad how much they get away with in these houses,” said Charnae Peterson, who is raising her 12-year-old son and 4-year-old daughter in Arlington Heights.

One of the most pressing issues in her unit: standing water and mold, concerns that prompted her to call the Allegheny County Health Department.

During the Post-Gazette’s visit to her development, she showed where a small pond had formed below the outside of her kitchen window that attracts bugs and where five-foot-tall cattails were shooting up from the muck.

When presented with specific examples by the Post-Gazette, Mr. Binion said that he was unaware of the problems and would look into them.

“We’re not perfect. We’re going to continue. I’m glad that you introduced that to me. Maybe we’ll look at some other things,” he said.

For public housing, inspections can be critical because they serve as a way to gauge safety and sanitary conditions as well as whether the facilities are being properly run.

In addition to the failures over the past three years, the Post-Gazette found some of the same housing developments had been flunking inspections for two decades.

The pattern of poor performance raises questions about the housing authority’s management at a time when many of its other facilities operated by private contractors fared much better.

While those facilities are mostly newer, mixed-income complexes, only one of the privately run developments failed its most recent inspection, out of the 11 inspected.

Nearly a decade ago, Pittsburgh leaders made an effort to review the workings of the housing authority, but with little success.

The agency, which has an annual budget of just over $180 million, directly manages or oversees more than 3,100 units in the city.

The City Controller’s office tried to obtain key documents, including contracts, construction expenses, and the donors to an annual golf outing, but the authority wouldn’t surrender all the records, saying it was already audited by federal officials.

“They really didn’t allow us to do the audit we wanted to do,” said City Controller Michael Lamb.

Mr. Lamb contends city law gives him the power to perform such audits, but the authority says that because it doesn’t receive local money, it’s not subject to the city’s reviews.

Years later, Pittsburgh City Council made an effort to watch over subsidized housing owned by private entities — but never included the larger, older complexes owned by the housing authority.

The private entities would be placed on a “warning list” starting in 2017 if they performed poorly on their federal inspections, but the larger, older complexes escaped any local scrutiny.

In the years leading up to the pandemic, the larger complexes failed multiple times while residents say they continued to press to get longstanding complaints resolved that in some cases were critical to safety and health.

Ms. Mada, the mother of eight in Northview Heights, says the mold and other issues became so bad in her apartment that the health department responded to her complaints at least six times, records show, repeatedly finding “spongy” walls and leaks from the bathtub, among other deficiencies.

Housing authority records show that it claimed to have resolved Ms. Mada’s requests, but health department inspectors continued to cite the same problems.

One couple in Northview Heights said they have been battling rodents for two years in a unit where they are raising five children, ages 2 to 18. “Thirty-two mice I have caught in my home,” Faydre Johnson said.

Another family in the same development resorted to using a lamp plugged above their toilet while they waited for the housing authority to replace the special bulbs that can only be used in the unit’s light fixtures — an issue that many residents cited in interviews.

A woman in Homewood North said she cooks by the light of her daughter’s small bedroom lamp because of the same problem in her kitchen.

Mr. Reed, a resident advocate in Northview Heights, said he frequently emails authority leaders about a wide range of issues, including responses to residents’ complaints.

“I know for a fact (people call) because when the housing authority don’t respond to them, they come to me and then I gotta argue and fight with them to come fix people’s houses. Always in the council meetings, that’s the main issue,” Mr. Reed said.

Nakeda Cox, a resident in Homewood North, said that lack of responses is prompting her and others to want to leave or transfer to newer and better run facilities.

The housing authority says it’s actively looking at transforming old sites, including getting money to redevelop the rows of 1940s-era brick structures that have long represented a different era in low-income housing.

But one resident said the authority needs to address the problems in those facilities while people are still living in them.