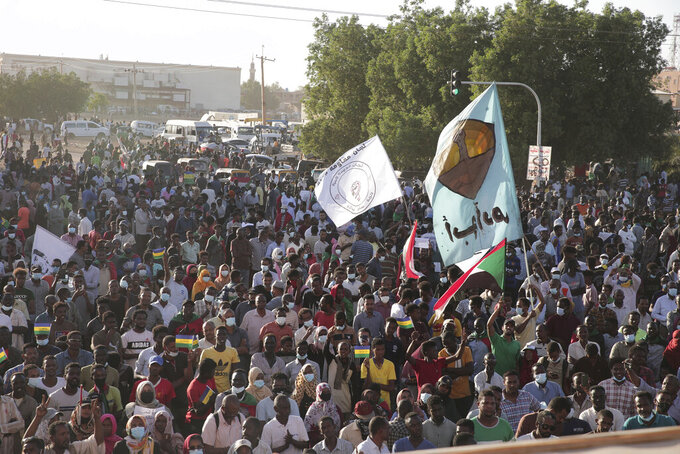 Marwan Ali, ASSOCIATED PRESS
Thousands of protesters take to the streets to renew their demand for a civilian government in the Sudanese capital Khartoum, Thursday, Nov. 25, 2021. The rallies came just days after the military signed a power-sharing deal with the prime minister, after releasing him from house arrest and reinstating him as head of government. The deal came almost a month after the generals orchestrated a coup. Sudan's key pro-democracy groups and political parties have dismissed the deal as falling short of their demands for a fully civilian rule. (AP Photo/Marwan Ali)

CAIRO (AP) — The deal struck in Sudan to reinstate the prime minister following a military coup is imperfect but has saved the country from sliding into civil strife, the U.N. envoy to Sudan said on Friday.

Special Envoy Volker Perthes was speaking of the agreement between Sudan's military leaders and Prime Minister Abdallah Hamdok, who was deposed and put under house arrest following the coup last month that stirred an international outcry.

The military takeover threatened to thwart the process of democratic transition that the country had embarked on since the ouster of longtime autocrat Omar al-Bashir.

The deal, signed on Sunday, was seen as the biggest concession made by the country's top military leader, Abdel Fattah al-Burhan, since the coup. However, the country's pro-democracy groups have dismissed it as illegitimate and accused Hamdok of allowing himself to serve as a fig leaf for continued military rule.

“The agreement of course is not perfect,” Perthes told The Associated Press. “But it is better than not having an agreement and continuing on a path where the military in the end will be the sole ruler."

Both signatories felt compelled to make “bitter concessions” in order to spare the country the risk of more violence, chaos and international isolation, he added.

“It would not have been possible to exclude a scenario which would have brought Sudan to something close to what we have seen in Yemen, Libya or Syria,” Perthes said. He spoke to the AP via videoconference from Khartoum.

Sudan has been struggling with its transition to a democratic government since the military overthrow of al-Bashir in 2019, following a mass uprising against three decades of his rule.

The deal that Hamdok signed with the military envisions an independent Cabinet of technocrats led by the prime minister until new elections are held. The government will still remain under military oversight, although Hamdok claims he will have the power to appoint ministers.

The deal also stipulates that all political detainees arrested following the Oct. 25 coup be released. So far, several ministers and politicians have been freed. The number of those still in detention remains unknown.

“We have a situation now where we at least have an important step towards the restoration of the constitutional order,” said Perthes.

Since the takeover, protesters have repeatedly taken to the streets in some of the largest demonstrations in recent years. Sudanese security forces have cracked down on the rallies and have killed more than 40 protesters so far, according to activist groups.

Further measures need to taken to prove the viability of the deal, said Perthes, including the release of all detainees, the cessation of the use of violence against protesters and Hamdok's full freedom to choose his Cabinet members.

On Friday hundreds rallied in Khartoum and other Sudanese provinces to demand a fully civilian government and protest the deal for the second straight day. It came after thousands protested on Thursday.

One of the marches was led Siddiq Al-Sadiq Al-Mahdi, a leader of Sudan's prominent Umma Party, which has split with other pro-democratic groups over the deal to reinstate Hamdok. He told journalists that protesters must remain steadfast in their calls for the generals to surrender power . Al-Mahdi was among those who were arrested during the coup and was let go in recent days.

He refused the idea of further negotiations.

“As things currently stand, there is no opportunity for things to move forward,” he said.