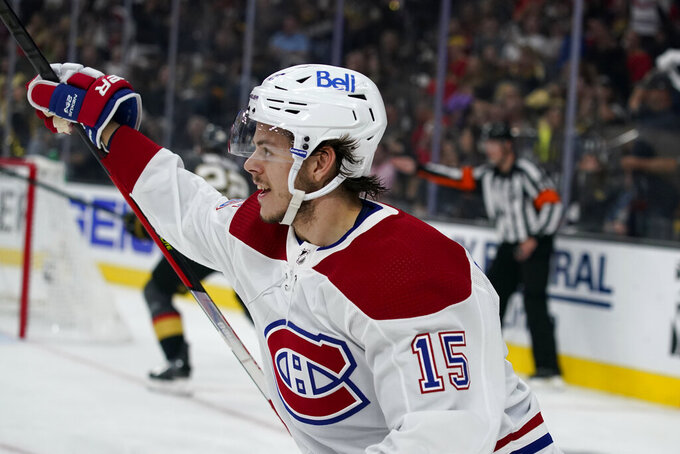 John Locher, ASSOCIATED PRESS
FILE - In this June 22, 2021, file photo, Montreal Canadiens center Jesperi Kotkaniemi (15) celebrates his goal against the Vegas Golden Knights during the first period in Game 5 of an NHL hockey Stanley Cup semifinal playoff series in Las Vegas. The Carolina Hurricanes have tendered an offer sheet to Canadiens restricted free agent Kotkaniemi. It's a one-year deal worth $6.1 million. The Canadiens have seven days to match or receive a first- and a third-round pick as compensation. (AP Photo/John Locher, File)

MONTREAL (AP) — Jesperi Kotkaniemi is now a member of the Carolina Hurricanes.

“Carolina has used a tool available to them in the collective bargaining agreement and we accept that decision,” Bergevin said in a statement.

Montreal will receive first- and third-round picks in the 2022 draft from the Hurricanes.

Later, the Canadiens acquired center Christian Dvorak from the Arizona Coyotes for a 2022 first-round draft choice and a 2024 second-round pick.

Carolina's offer sheet was a response to Montreal trying to poach Carolina’s Sebastian Aho the same way two years ago. Montreal signed Aho to a $42.3 million, five-year offer sheet in the summer of 2019. Carolina quickly matched.

After Kotkaniemi signed the offer, Carolina’s Twitter account posted the message “People don’t forget” about Aho’s offer sheet and referenced the $20 signing bonus in Kotkaniemi’s deal — Aho’s jersey number. Kotkaniemi’s contract which is worth a total of $6,100,015 in a nod to his No. 15. The Hurricanes also jabbed at the Canadiens by tweeting the news about Kotkaniemi in French.