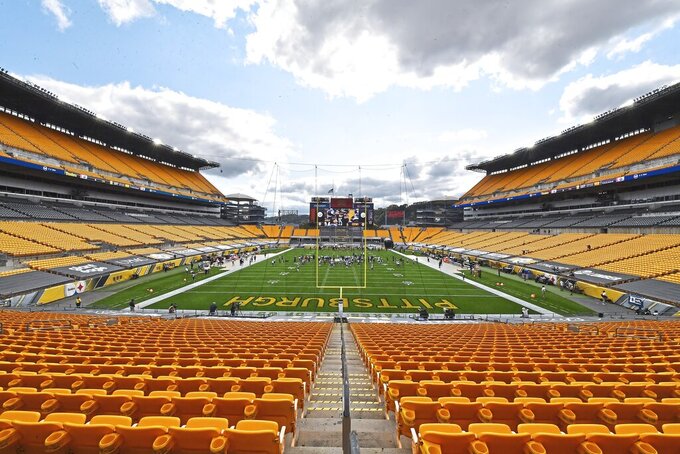 Peter Diana, ASSOCIATED PRESS
In this Sept. 27, 2020 photo, the Pittsburgh Steelers play the Texans during an NFL football game in an empty stadium at Heinz Field Pittsburgh. For those with an eye toward the future, the swaths of empty seats during COVID-19 represented a blank canvas — raising fun and fantastical visions of what the world around the games will look like in 10, 20 or even 50 years. (Peter Diana/Pittsburgh Post-Gazette via AP)

PITTSBURGH (AP) — As the world stood still for extended stretches during the first 18 months of the coronavirus pandemic, so did the stadiums, arenas and ballparks where screams and cheers (and boos) from thousands of sports spectators once echoed in collective euphoria.

For those with an eye toward the future, the swaths of empty seats represented a blank canvas — raising fun and fantastical visions of what the world around the games will look like in 10, 20 or even 50 years.

Multibillion-dollar stadiums that look like something from “The Jetsons.” In-stadium viewing technology that makes many of today’s Jumbotrons appear like a quaint analog television. Stadium complexes that are more like self-contained cities than a collection of tens of thousands of hard plastic seats. Holograms on the field re-enacting a spectacular touchdown catch. Seas of asphalt normally reserved for parking vanishing.

Even as fans have started to reunite with their beloved teams in recent months, questions remain about what the in-stadium experience will look like in the future.

The pandemic gave professional franchises and colleges a glimpse at a world without fans.

For some, it forced them to rethink what their athletic palaces offer fans besides a game and, in some cases, accelerated existing plans for innovation.

“In my generation, all you really had to do was have a good game on the field and give me a seat where I could see it, and I’d be happy,” said Pete Giorgio, a principal and U.S. sports practice leader with Deloitte Consulting LLP. “These days, you have to produce a broader experience. It’s not entertainment at halftime.”

It’s something much, much grander.

“Owning and driving and helping with this broader experience around the game I think is a big place a lot of organizations are going to go.”

Prior to March 2020, the relationship between fans and the sports they consume live was already evolving, if not deteriorating.

In 2019, college football attendance hit its lowest point since 1996, marking the eighth time in a nine-year stretch in which the national average fell.

Before a slight uptick in 2019-20, Division I men’s college basketball attendance nationally had decreased for 13 consecutive years. Average Major League Baseball attendance was down 13% in 2019 from 11 years earlier. That same year, even the mighty National Football League saw its lowest attendance figures in 15 years.

The shrinking crowds had triggered changes.

Since 2010, 21 of MLB’s 30 franchises had their stadium’s seating capacity reduced at some point or moved into a new, smaller venue. Twelve NFL teams had done the same in that time. A New York magazine story in December 2019 even predicted that in the next decade, a professional league would experiment with playing games on soundstages to maximize the at-home viewing experience.

The reasons for those declines vary, but they centered around a larger idea: How valuable was the in-person sports viewing experience in the 21st century?

“I would not be shocked if live attendance is substantially lower in the post-pandemic era than it was in the pandemic era,” said Brad Humphreys, an economics professor at West Virginia. “It’s not hard to imagine that people have realized they can get just as much enjoyment following the Steelers on social media and watching the games on television and interacting with other fans on social media.”

The question then becomes pretty simple: What do these franchises and schools do to create an experience that fans can only get inside the walls of the venue?

Some of that work has taken place over the past several years. Many franchises and organizations have ramped up their digital footprints, investing more heavily in team-issued apps and over-the-top media services.

Through the Steelers’ official app, fans can access real-time replays and game stats, report an incident, receive help navigating Heinz Field, and use available augmented reality technology at displays in the stadium’s Great Hall, where the team’s Super Bowl trophies and a Terrible Towel exhibit are located.

On that same app, fans can use mobile ticketing — an initiative the Steelers and teams across professional sports have increasingly championed.

Though a failure by some guests to download tickets to their phones led to long lines at the team’s home opener in September — a snafu the franchise is working on — the Steelers’ vice president of sales and marketing, Ryan Huzjak, said mobile tickets are easier to transfer and that less fraud is associated with them, among other benefits.

“If something were to occur, contract tracing or otherwise, with a paper ticket, that’s largely an anonymous device,” Mr. Huziak said. “You don’t know who has that ticket.

“With a mobile ticket, you have a better connection to the actual attendee. Those things became critical in terms of looking at the logistics of communicating to fans, changing policies, updating policies, or just general information and preparedness.”

Even before the pandemic, teams were doing what they could to offer more than just a game to fans who came near the stadiums, arenas and ballparks on game days, transforming the blocks around a venue into entertainment districts.

It’s a development that was a major part of “The Future of Sports,” a 2015 report from Attention Span Media, an agency that works with management teams on strategy.

Projects like Ballpark Village in St. Louis and Patriots Place in Foxborough, Mass., are examples of a larger trend that the report described as the stadium space extending “outward to include a greater variety of ways fans can experience game day. ... Tickets will no longer be sold just for seats in view of the field; open-concept venues will provide tiers of access that allow fans to roam the complex. The tailgating experience will come inside the gates.”

“It’s like full malls that are attached to stadiums and green outdoor space and all of that,” said Josh McHugh, the editor-in-chief of Attention FWD, Attention Span Media’s content arm. “I think you’re going to see a lot more of that, just a better use of space and stadium operators figuring out how to keep people there longer so you’re not just driving up, going to the game and leaving. You’re making a day of it or maybe an overnight of it.”

That was only one of a number of projections featured in “The Future of Sports” about the in-stadium experience. It envisioned a future in the five to 10 years after its publication that included video walls built into stadium architecture, on-field holographic replays and glasses-free three-dimensional technology in luxury boxes.

With self-driving cars and ride-sharing services dropping fans off closer to the stadium — and fans not necessarily driving themselves to games — the seas of asphalt that surround many stadiums could be significantly reduced, with tailgating and other pregame festivities moving inside the larger stadium complex.

It doesn’t stop there. Mr. McHugh said apps are in development similar to Waze, the popular navigation app, that could be used in stadiums. A fan would type in where they want to go, be it the bathroom or concession stand, and it will show them the way to do it that takes the least amount of time.

This year, the Steelers introduced mobile ordering for concessions. Mr. Huzjak said they’ll look to expand their offerings in the years to come, from self-serve to walk-through options that will allow attendees to get products quicker and more efficiently, cutting down on those long lines with which any sports fan missing a key play is painfully familiar.

Then there’s augmented and virtual reality (AR and VR). Through AR technology, a fan could zoom in on different parts of the field, isolate a play and get a personalized replay. In essence, it would make fans the producers of their own, personalized broadcasts.

“One of the big drawbacks to being at a game live is something will be going on in the stands ... you’ll be having a conversation or you’ll be looking at one part of the play and something remarkable happens and you’ll miss it,” Mr. McHugh said.

“You always hope that they caught it and that they’ll be replaying it on the Jumbotron, but that doesn’t always happen. To be able to control your own live production is going to be a fantastic addition to the mix.”

Skin in the game

No conversation around sports in 2021 can be untethered from gambling, including how it affects the way fans in a stadium or arena consume the games they’re there to see. In August 2020 alone, Americans bet $2.1 billion on sports, a single-month record at the time.

Capital One Arena and Nationals Park in Washington have sportsbooks inside the venues. The Phoenix Suns are having one added to their arena, and in August, the Arizona Cardinals reached a deal to become the first NFL team with an on-site sportsbook.

Like dozens of other professional teams, the Steelers have partnerships with sports betting companies — in their case, BetMGM and Unibet.

How teams incorporate gambling over the course of a game — apps where fans can make live bets or gambling lounges inside the stadium, for example — could have a sizable role in shaping their present and future financial success.

“That has helped the value of the teams because it’s a profit center now and it has kept fan interest,” said Ronald Dick, an associate professor of sports marketing at Duquesne University.

“I hear people say, ‘I can’t watch a sporting event unless I have some skin in the game. Even if it’s a small bet, I need to have a couple of dollars on it.’”

But back to the game

For all the accessories, features and trappings that will make the stadiums, arenas and ballparks of the future radically different from what they are today, the central appeal will remain. All the bells and whistles can help keep fans’ attention, but it’s the game that brings them there in the first place.

“The underlying pull is there,” Mr. Giorgio, the Deloitte exec, said. “It’s been there for thousands of years.