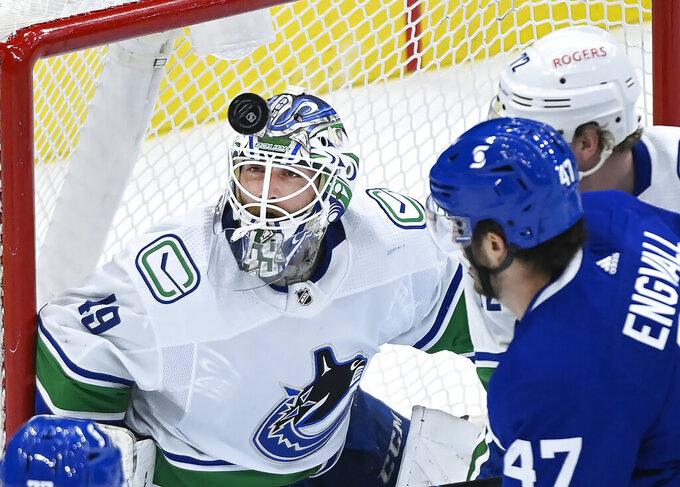 Suter got a $14.6 million, four-year deal from the Stars, who bring in the 36-year-old less than two weeks after making 22-year-old Miro Heiskanen one of the NHL's highest-paid defensemen with a $67.6 million, eight-year contract through the 2028-29 season.

“Ryan is a true professional and will be a great fit in our top-four,” Stars general manager Jim Nill said. “He has a huge influence on the game with his ability to defuse plays, which injects a sense of calmness into his teammates. He is able to play in every situation and as a veteran of 16 NHL seasons his wealth of experience will be a great addition to our dressing room.”

Dallas also signed forward Luke Glendening to a $3 million, two-year contract after he had played all eight of his previous NHL seasons with Detroit. A pair of defensemen, Alexander Petrovic and Andreas Borgman, signed one-year, two-way contracts.

Holtby got a $2 million contract for next season after he was bought out by Vancouver. He joined a Stars goaltender group that already included Anton Khudobin, Ben Bishop, and Jake Oettinger. Khudobin and Bishop are both signed for two more seasons, and Oettinger was their No. 2 goalie as a rookie when Bishop missed last season recovering from knee surgery.

Nill said the 34-year-old Bishop continues to rehab, but uncertainty about his health was a factor in adding Holtby for more depth.

“There’s still no clear resolution to his health,” Nill said. “We don’t know when he’s going to play, if he plays. ... His plan is still to be ready sometime during the season. We don’t know when that will be, so we just thought it was just it’s too much of a risk to take a chance.”

Since entering the NHL in 2005, Suter leads all defensemen with 1,198 games played and his 607 points are the fourth-most among defenders. He had 19 points (three goals, 16 assists) while averaging more than 22 minutes of ice time in 56 regular-season games last season for Minnesota, which after losing to Las Vegas in the first round of the Stanley Cup playoffs bought out the contracts of veterans Suter and Zach Parise.

The Stars missed the playoffs in the condensed 56-game season, after last summer making it to the Stanley Cup Finals inside the NHL bubble in Canada to end the 2019-20 season that was interrupted by the COVID-19 pandemic.

Suter has a no-move clause in his contract, but Nill said the Stars see him as a marquee player. It also comes after they lost defenseman Jamie Oleskiak to the Seattle Kraken in last week's expansion draft.

“We're comfortable with Ryan at his age, how he plays. The minutes he’s been playing, really no decrease in his play over the last year,” Nill said. “We think he’s got four years left in him and can be a big part of our team.”

The 31-year-old Holtby was 7-11-3 in 21 games last season for Vancouver. He had spent the previous 10 seasons in Washington, where he was part of the Stanley Cup championship in 2018 and was a five-time All-Star. He was the Vezina Trophy winner in 2015-16.

“We’re looking forward to Braden giving us the elite goaltending that he’s shown he’s capable of throughout his career," Nill said. "He has won every major award a goaltender can win and we are thrilled that a person of his pedigree is joining our organization.”