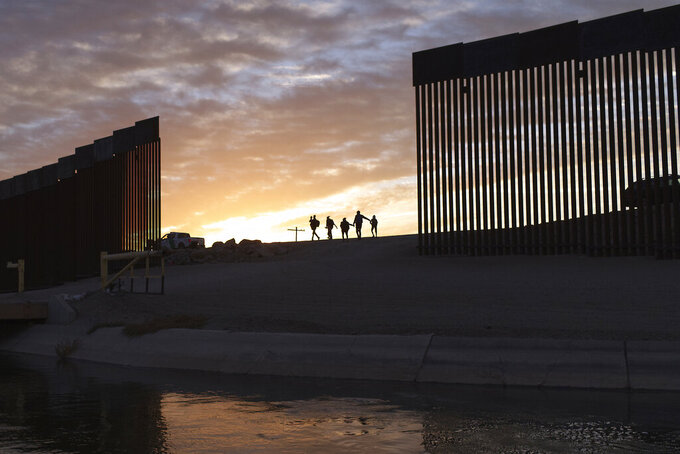 Eugene Garcia, ASSOCIATED PRESS
FILE - In this Thursday, June 10, 2021, file photo, a pair of migrant families from Brazil pass through a gap in the border wall to reach the United States after crossing from Mexico to Yuma, Ariz., to seek asylum. The Biden administration proposed Wednesday, Aug. 18, to change the way asylum claims are handled, aiming to cut a huge backlog of cases from the Southwest border that has resulted in people waiting years to find out if they will be allowed to stay in the U.S. (AP Photo/Eugene Garcia, File)

PHOENIX (AP) — Human rights groups are calling on the Biden administration to consider the effects that climate change-fueled heat has on migrants when designing the government's border policies.

Human Rights Watch on Wednesday released the letter sent by 68 groups to the U.S. government, urging a new approach to actions on the southwestern border after this summer's deadly heat.

The Southwest has become one of the fastest warming regions in the U.S. as climate change increasingly wreaks havoc on the environment, ramping up heat waves, hurricanes and wildfires.

The letter says U.S. policies limiting entry to migrants who hope to apply for asylum can prompt them to make risky journeys through dangerous areas.

The groups mentioned the August deaths of a female migrant and her 10-year-old daughter in the desert west of Yuma, Arizona as highs reached 119 F. Border officials found a 2-year-old boy alongside the bodies.

In southwestern Arizona, a new report by the nonprofit Humane Borders and the Pima County Medical Examiner’s office says that the remains of 19 migrants were found in the Arizona borderlands in July, bringing the annual total number of recoveries for 2021 thus far to 146.