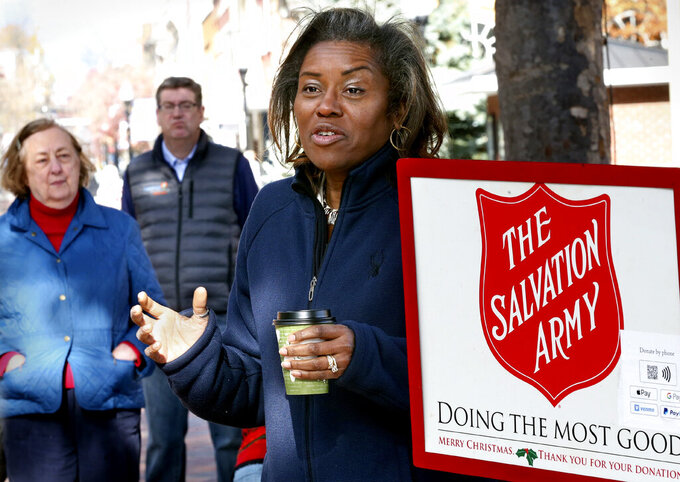 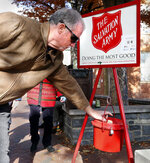 WINCHESTER, Va. (AP) — The local Salvation Army has secured about 300 volunteers to participate in its 2021 Red Kettle fundraising campaign — a record high.

The nonprofit organization kicked off the fund drive Friday afternoon on the Loudoun Street Mall in front of El Centro Mexican Restaurant. The campaign runs through Dec. 24 and involves bell ringers soliciting donations at numerous kettles stationed around the community. The money raised provides area residents in need with food, temporary housing and other assistance.

“We’ve certainly been able to communicate a lot more with volunteers because we’ve been keeping their (contact) information to reach out again,” said Salvation Army Capt. Jared Martin. “But also I think people are eager to get out again after being held up for so long. And this is such a wonderful way to make a difference in our community.”

This year’s fundraising goal is $75,000, down from last year’s goal of $95,000 and the previous year’s goal of $140,000. The campaign netted $78,823 last year, which was a challenging time for the Salvation Army as it struggled to raise money and secure bell ringers during the COVID-19 pandemic. Martin said the 2020 campaign was called “Rescue Christmas” because everything was “in such peril.” But Martin is more optimistic about this year and noted this year’s campaign is called “Hope Marches On.”

Among those attending the kickoff was Lt. Gov.-elect Winsome Sears of Frederick County, who was the first person to drop money into a kettle. She said it was “so good to be here” and recalled her time serving as director of the Hampton Roads Salvation Army women’s shelter when she lived in that area.

“When you work at the Salvation Army, you just see so much good that can be done, and I loved every minute of it,” Sears said. “It was the best job I ever had. My husband could tell you I was barely home because you can see how you put so much hope into the lives of people who need it the most.”

Martin said 82 cents of every dollar donated goes directly to the people the nonprofit serves. That leaves 12 cents for administrative expenses and six cents for fundraising. Sears said the amount of money the Salvation Army gives per dollar is “awesome.”

Over the past year, the local Salvation Army has served 243 people in its 48-bed shelter at 300 Fort Collier Road — 45 children, 43 survivors of domestic violence and 17 over the age of 62.

“When those children and survivors of domestic abuse needed help, those doors were open because of you,” Martin told the crowd.

Middletown Mayor Charles Harbaugh IV was among those who donated money during the event. He said it’s important to support organizations like the Salvation Army.

“It’s been a tough year for nonprofits with the virus,” Harbaugh said. “For a lot of them, it’s been restricting how they can raise funds and raise revenue. Events have been tough to have for a lot of places. But, more than ever this year, they need the help they can get with donations and support. So it’s a good kick off to the year and hopefully a better and brighter year for the Salvation Army. ”

During the event, the Salvation Army National Capital Band played classic Christmas songs like “Deck the Halls” and “Feliz Navidad.”

Those not able to donate in person have the option to set up an online “kettle” at redkettlenow.com (scroll down to Winchester).

Also on Friday, the Salvation Army launched its Angel Tree Program to collect Christmas presents for local children in need. People who want to provide gifts are asked to select an angel-shaped tag from Christmas trees placed in locations throughout the community. Each angel contains information about the child, such as age and a Christmas wish list. Martin said this year’s program will benefit approximately 750 children.