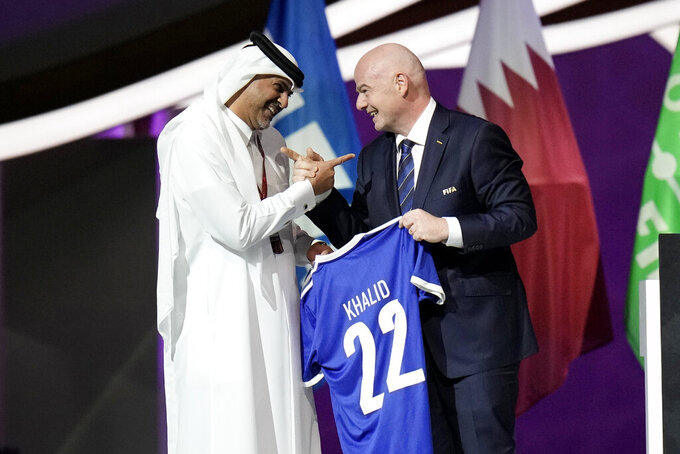 DOHA, Qatar (AP) — World Cup host Qatar and FIFA received scathing criticism from within soccer on Thursday, a day before the tournament’s draw.

On their own territory. In their own house. By a member of soccer's extended family.

The president of Norwegian soccer — one of the few women ever to lead a FIFA member federation — stepped up on the stage at the governing body's congress to air her concerns at the same venue that will host Friday's draw.

Lise Klaveness, a judge and former national team player, spoke about Qatar's record of protecting the rights of migrant workers — who have built tens of billion of dollars of projects needed for the World Cup — and its criminalization of homosexuality.

It was a rare show of dissent and tension in the typically tightly scripted annual meeting of soccer's 211 member countries.

Klaveness targeted issues that have dogged Qatar and FIFA’s controversial choice of the Middle Eastern country for more than a decade only three weeks after she was elected in Norway with a mandate to pressure the World Cup organizers.

“In 2010, the World Cup was awarded by FIFA in unacceptable ways with unacceptable consequences,” Klaveness, who is gay, said in a six-minute speech. “There is no room for employers who do not secure the freedom and safety of World Cup workers. No room for hosts that cannot legally guarantee the safety and respect of LGBTQ+ people coming to this theater of dreams."

FIFA had worked this week in Doha to keep the Norwegian's speech off the main Congress agenda, and then gave the floor to rebuttals from a Latin American soccer official and the head of Qatar’s organizing committee.

“This is not the right forum and not the right moment,” Honduras soccer federation general secretary Jose Ernesto Mejia said in translated comments.

Still, there was some warm applause for Klaveness before she walked the length of the arena floor past the mostly-male delegates to return to the Norwegian delegation seats.

Klaveness was then chided by Hassan Al-Thawadi, who fronted Qatar’s bid more than 12 years ago and has led the organizing committee ever since.

Qatar and FIFA have consistently said taking the World Cup to the country, and to the Middle East for the first time, accelerated positive changes in the nation's laws and society.

Al-Thawadi said the month-long tournament could be an antidote to “stereotypes and assumptions” about the region.

“We are acutely aware of the international spotlight that comes with the hosting rights for the greatest show on earth. We have embraced it,” he said.

Human rights and labor activists have also long been concerned that deaths on all Qatari construction projects, not just soccer stadiums, have not been accurately calculated nor investigated.

"The migrant workers injured or families of those who died in the buildup to the World Cup must be cared for," Klaveness said. “FIFA must act as a role model.”

Qatar was later defended by FIFA President Gianni Infantino, who moved his home last year from Switzerland to live mostly in Doha.

“The work that has been done has been exemplary,” Infantino said. "Of course, not everything is perfect. But progress has been made.”

The war in Ukraine then took center stage as a three-minute video message was aired from the head of the country's soccer federation, Andriy Pavelko.

Pavelko wore an armored vest as he spoke from Kyiv and talked of “resisting military aggression” from Russia while behind him people packed sandbags several meters high to protect a monument.

“Our children have suffered terrible psychological injuries and perhaps it is football that will help them forget all the horrors of war,” said Pavelko, who sits on the UEFA executive committee.

The Russian delegation watching in the room included Alexey Sorokin, a former FIFA Council member who led the organization of the 2018 World Cup in his country.

“I have worked with him for a very long time and we regret that he has these emotions," Sorokin said of Pavelko's film. “It is difficult for them, we understand that, but I’m here not to discuss politics or military activities."

Although FIFA has banned Russian teams, including the men’s national team from World Cup qualifying, the soccer federation has not been suspended.

“We are not hiding,” Sorokin said before the meeting. “We have every right to be here.”

Infantino closed the three-hour congress by confirming he would run for re-election as FIFA president next year. No rival candidate is currently expected to challenge him at a congress that could be held in July 2023 in Australia or New Zealand on the eve of the Women’s World Cup in those countries.

Infantino earlier reminded member federations they were each due to receive $8 million in FIFA funds over the next four years — a seven-fold increase since he became president in 2016.

“The money has to go to our children all over the world, where it is most needed,” he said, citing soccer development projects.

FIFA expects to top $7 billion in revenue for the four-year commercial cycle ending with the World Cup in Qatar. That is a near-10% raise on total income of $6.4 billion tied to the World Cup in Russia.

The 2026 edition co-hosted by the United States, Canada and Mexico should set records for total and average game attendance and hugely increase FIFA revenue. It will be the first 48-team World Cup with 80 games instead of the current 64 and using several NFL stadiums.