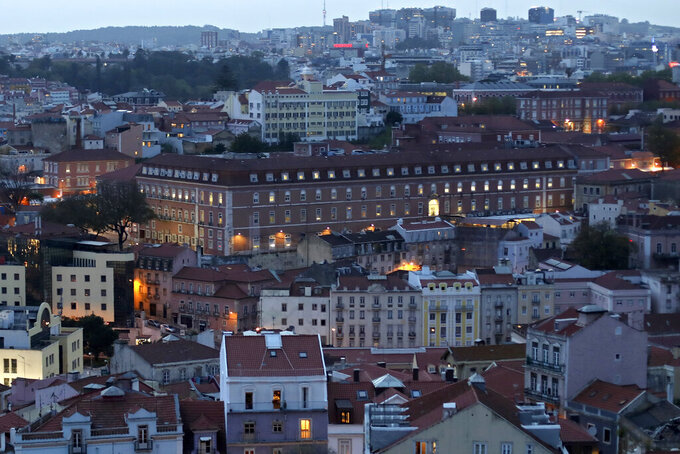 Pedro Rocha, ASSOCIATED PRESS
Windows are lit at the Sao Jose Hospital, center, in Lisbon, Monday, March 29, 2021. An Italian fugitive, convicted in his homeland of ordering the revenge killing of a mobster’s wife, was arrested in Portugal on Monday in a clinic where he was reportedly being treated for COVID-19. (AP Photo/Pedro Rocha)

ROME (AP) — A Italian fugitive, convicted in his homeland of ordering the revenge killing of a mobster’s wife, was arrested in Portugal on Monday in a clinic where he was reportedly being treated for COVID-19.

Italian Interior Minister Luciana Lamorgese said in a statement that Francesco Pelle was one of Italy’s most dangerous fugitives. She gave no further details except to say that the Italian Carabinieri paramilitary police and anti-Mafia prosecutors had been on his trail.

Italian daily Corriere della Sera said Pelle was arrested in a Lisbon hospital where he was being treated for COVID-19.

Pelle, 43, was a noted figure in one of the Calabriá-based ’ndrangheta’s most notorious organized crime clans. Corriere della Sera said he vanished from Milan in 2019 just before Italy's top criminal court upheld his conviction for ordering the slaying of Maria Strangio at her home in Calabria on Christmas Day 2006.

That murder was part of a long history of bloodshed in a power feud between the Pelle-Vottari clan and the rival Nirta-Strangio clan in the 'ndrangheta stronghold town of San Luca.

Pelle himself had been wounded in the feud a few days earlier, shot in the back, and the killing of Strangio was believed to have been ordered in retaliation.

Then, in revenge for the woman's slaying, seven suspected members or associates of the Pelle-Vottari clan were gunned down outside an Italian eatery in Duisberg, Germany, in 2007.

The sensational attack in Germany made plain to authorities in Europe what Italian investigators had been saying for years: That the 'ndrangheta, awash in cocaine revenues, had extended its reach throughout much of the continent as it gobbled up businesses to help launder billions in drug profits.