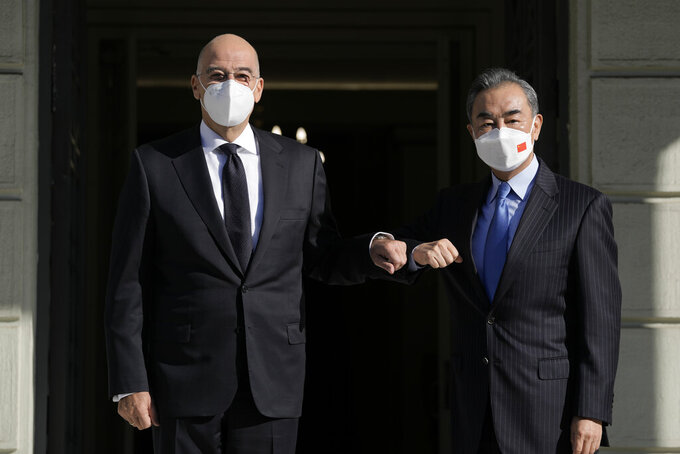 Greece recently emerged from a brutal decade-long financial crisis that wiped out a quarter of its economy and has been eager to attract international investments. China, which is constructing ports, railways and other infrastructure in dozens of countries around the world under its Belt and Road Initiative, is already heavily involved in Greece.

The Chinese company Cosco Shipping now owns 67% of Greece’s Piraeus Port Authority, one of the largest ports in Europe, after Greek lawmakers ratified the sale of a 16% stake in the company on top of the 51% Cosco already held.

Greece also granted Cosco another five years to follow through with investments that it had promised to make as part of its deal to buy a majority stake in Piraeus.

“We look forward to new investment projects in the largest port of the Mediterranean, one of the largest in the world,” Greek Foreign Minister Nikos Dendias said after his meeting with Wang in the Greek capital.

“We have repeatedly said Greece can be a gateway from Asia into Europe, an energy hub,” Dendias said, noting the two had discussed deepening economic relations between the countries, as well as increasing cultural and tourism ties.

Dendias noted that he had briefed his Chinese counterpart on the “particularly worrying developments in the eastern Mediterranean” and what he described as Turkey's “destabilizing role” in the region, which he said could inhibit maritime commerce “which greatly interests the Chinese side.”

Neighbors Greece and Turkey are divided over a long series of disputes, including over exploitation rights in the eastern Mediterranean, which have led to severe escalations of tensions in recent years. Athens has been seeking to shore up international support for its positions against Turkey.

Dendias said he spoke to Wang “extensively” about what he said was Turkey's effort to become involved with “Muslim populations across the world by promoting ideologies such as Muslim brotherhood and attempting direct involvement in the internal affairs of other countries.”

Turkey has in the past raised the issue of China's treatment of the Uyghurs, an ethnically Turkic Muslim minority in northwestern China, although it has become less vocal about their plight recently amid efforts by Ankara to forge closer economic ties with Beijing.

China has been accused of major human rights violations in its province of Xinjiang against Uyghurs and other minorities, including mass incarcerations, forced birth control, sterilization and abortions. Beijing rejects the accusations, saying the camps are centers for vocational training and deradicalization to turn the region's residents away from extremism and terrorism.

Reporters were not permitted to attend the joint statements, and no questions were allowed.

Wang described China’s involvement in Piraeus as an “emblematic” project of the Belt and Road Initiative and a model for mutually beneficial cooperation.

Labor unions, however, have criticized working conditions at the shipping terminal, saying profits are placed above safety. A worker died this week in an accident at the Cosco-run container terminal in Piraeus.

Greece's opposition Syriza party slammed conditions at the port, saying such labor accidents were caused by “the constant exhausting rates of work (at the container terminal) which cause long-term exhaustion and work-related illnesses.”

Cosco acquired the 51% stake in the port of Piraeus in 2016, under a Syriza-led government.

Wang said China was willing to expand "the EU’s global interconnection strategy, so as to enhance the level of interconnection of the Eurasian Continent, stimulate the growth potential of China and Europe, and accelerate the global economic recovery.”

Wang's visit comes shortly after the Olympic flame, lit in a ceremony in Ancient Olympia in southern Greece, arrived in Beijing for the 2022 Winter Games. The ceremony was disrupted by activists accusing the International Olympic Committee of granting legitimacy to rights abuses in China. IOC officials have said rights issues are not part of their remit.

Wang said Beijing was ready for the gams, and he condemned what he called the politicization of sports.

“Beijing is ready. We are confident to be able to present a simple, safe and brilliant Olympic gala," he said. “The politicization of sports distorts the Olympic purpose, and we should resist it together. Healthy and fair sports can enhance mutual cognition and understanding of different countries.”