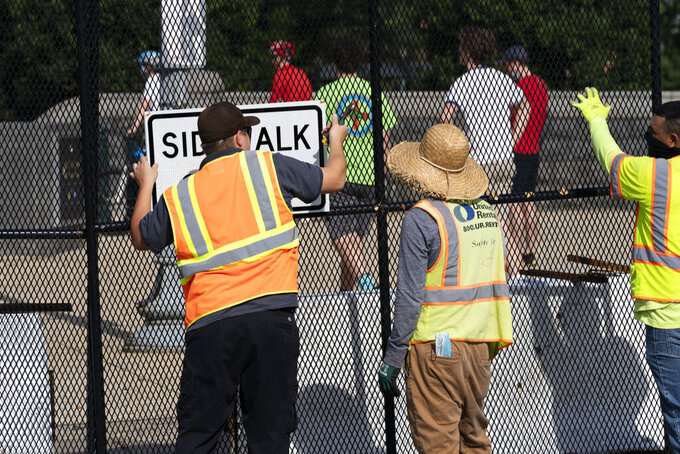 WASHINGTON (AP) — Senate Democrats are proposing $3.7 billion in emergency spending to bolster security at the Capitol, repay outstanding debts from the Jan. 6 insurrection and help the federal government defray costs from the COVID-19 pandemic. The legislation met immediate opposition from Republicans who floated a much narrower version.

Democrats say their bill, which comes more than six months after the attack on the Capitol by former President Donald Trump’s supporters, is necessary to ensure that the Capitol Police officers who battled the insurrectionists that day, and the National Guard troops who protected the building for months afterward, do not face pay cuts or funding shortfalls in the coming months.

It's just the latest flashpoint in the congressional response to the Jan. 6 attack, in which a violent mob of Trump’s supporters pushed past police, broke into the building and interrupted the certification of President Joe Biden’s victory. Some Republicans have downplayed the violence of the day, and almost all in the GOP have argued against broad new spending on security improvements. Not one Republican voted for a Capitol security bill passed by the House in May.

Similar to the House legislation, the Senate bill would provide dollars to secure buildings and doors, boost personal protection for lawmakers, install new security cameras and create a new “U.S. Capitol Protection Task Force” that could respond quickly if there were another attack on Congress.

In addition to the security improvements, the bill would provide $1.3 billion in emergency dollars to address COVID impacts at the Defense Department and additional money to help with pandemic costs at other agencies. It would also include $100 million for refugee assistance in Afghanistan as the U.S. withdraws from the war there, and it would increase the number of visas for some Afghan immigrants.

The top Republican on the Senate Appropriations Committee, Alabama Sen. Richard Shelby, called the legislation a “Democratic wish list” and proposed his own $633 million bill that would pay the Capitol Police and the National Guard for costs related to the Jan. 6 response. The wide disparity between the two bills made it unlikely that Democrats in charge of the 50-50 Senate would find enough support to pass their more expensive legislation.

But Senate Appropriations Chairman Patrick Leahy, D-Vt., said Congress “did not budget for an insurrection” and said the Republican version falls far short of what is needed. He said his memories of “the growing roar of that mob echoing down the hallway as the Capitol Police whisked us to safety” on Jan. 6 have not faded.

“I appreciate them bringing something, but it is a pretty small something,” Leahy said of the GOP bill. “It’s a proposal that does not provide the appropriate resources to secure the Capitol or address the urgent needs that have risen since January 6. The images of the mob breaking the windows and forcing their ways through doors expose the truth.”