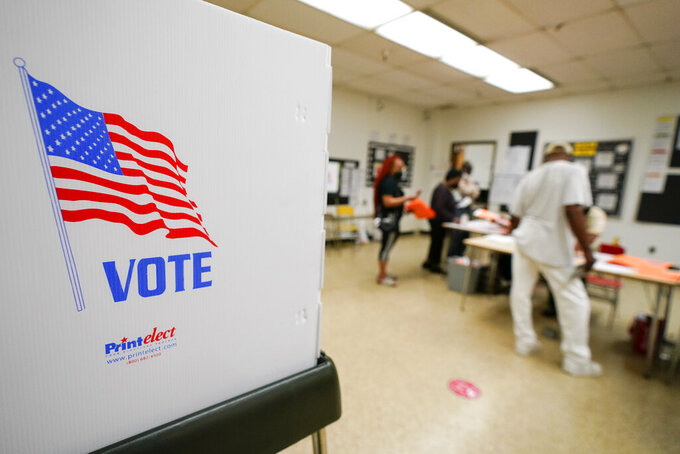 ANNAPOLIS, Md. (AP) — Both Republicans and Democrats have closely watched primaries for governor in Maryland this year. Here is a look at some of the other races in a big Maryland election year with open statewide offices, including attorney general and comptroller. All 188 seats in the Maryland General Assembly are on the ballot.

Here is a look at what's at stake Tuesday:

U.S. Rep. Anthony Brown defeated Katie Curran O’Malley, a former judge and Maryland first lady, for the Democratic nomination for attorney general, an office that is opening with the retirement of Attorney General Brian Frosh. Brown was lieutenant governor during the administration of former Gov. Martin O’Malley, Curran O’Malley’s husband. For the GOP, Michael Peroutka, who served a term on the Anne Arundel County Council, defeated former prosecutor Jim Shalleck. The winner of the Democratic primary will be a heavy favorite in the general election. Maryland has not had a Republican attorney general in nearly 70 years.

Brooke Lierman, a state legislator from Baltimore, won the Democratic nomination to be the state's tax collector. She defeated Tim Adams, who is the mayor of Bowie. Republican Barry Glassman, who is the Harford County executive and a former state senator, is running unopposed for the GOP nomination. In addition to being the state's tax collector, the comptroller is one of three voting members on the state's powerful Board of Public Works, along with the governor and treasurer.

U.S. Sen. Chris Van Hollen, who's running for a second term, defeated his challenger in the Democratic primary: Michelle Smith, a Freedom of Information Act policy analyst with the U.S. Agency for International Development.

Chris Chaffee, who ran unsuccessfully against U.S. Rep. Steny Hoyer in 2014, won the GOP nomination in a 10-way primary.

Glenn Ivey, a former Prince George's County state's attorney, defeated former Rep. Donna Edwards for the Democratic nomination to Maryland's 4th Congressional District. The Black-majority district that is heavily Democratic in the suburbs of the nation’s capital is the only open race.

Democrats hold a 7-1 advantage in the state's U.S. House delegation. All the incumbents running for re-election won their primaries.

Candidates are on the ballot this year for all 188 seats in the Maryland General Assembly, which is controlled by Democrats. The 47-member Maryland Senate has seven open seats after several senators announced they would not seek reelection. The House of Delegates also has some prominent departures, including longtime Del. Maggie McIntosh, a Baltimore Democrat who chaired the House budget committee, and Del. Shane Pendergrass, a Howard County Democrat who chaired the House Health and Government Operations Committee.

It could take days, or even longer, to determine who the winners are in some of the state’s competitive races, because there are about 500,000 mail-in ballots that can’t begin to be counted until Thursday.

Maryland’s primary is happening now on its own, because it was delayed three weeks by the state’s highest court in March due to lawsuits challenging redistricting maps.