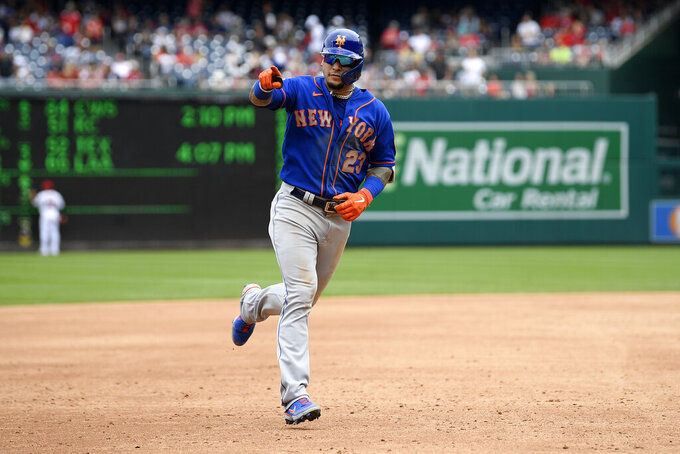 Nick Wass, ASSOCIATED PRESS
New York Mets' Javier Baez points to the stands as he rounds the bases on his home run during the third inning of a baseball game against the Washington Nationals, Sunday, Sept. 5, 2021, in Washington. (AP Photo/Nick Wass)

WASHINGTON (AP) — Javier Báez went 4 for 4 with a home run, Kevin Pillar hit a grand slam that capped a game-sealing, six-run ninth inning, and the New York Mets withstood another rally from the Washington Nationals to earn a 13-6 victory Sunday.

Francisco Lindor and Jonathan Villar also homered for the Mets, who squandered an early four-run lead but got 4 2/3 shutout innings from their bullpen to win for the seventh time in eight games.

Going into the day, the Mets had made up 5 ½ games on the NL East-leading Atlanta Braves since Aug. 28.

“We can’t constantly stare at the scoreboard,” Pillar said. “I know we’ve gotten some help over the last couple days, which helped us. Ultimately, it comes down to us taking care of business. With the margin we’re at right now, we know we have games with Philly left. We know we have the last three games of the year with Atlanta. If you had told me we’d be 2 ½ back two weeks ago, we’d like our chances.”

Lane Thomas and Josh Bell homered for Washington, which has lost eight of nine and 24 and its last 31.

With the score 6-all, Andres Machado (1-2) allowed three consecutive singles to open the eighth before Patrick Mazeika’s sacrifice fly to a diving Thomas in center put the Mets ahead.

Lindor greeted Austin Voth in the ninth with a first-pitch drive for his 13th homer. Voth allowed three more hits and a walk before Pillar sent a shot into the seats in left-center for his 14th homer of the year and third career grand slam.

Aaron Loup (5-0) worked a scoreless seventh. It was the 42nd victory by Mets relievers this season, the most in the National League.

Washington starter Josiah Gray’s three-inning outing was the shortest of his brief career. He allowed six runs on seven hits while striking out two. After allowing a four-run first, Gray yielded homers to Villar in the second and Báez in the third.

“From pitch one to pitch ... I don’t know how many pitches I had today, I was battling command,” said Gray, who threw 82 pitches. “I was battling execution. A lot of hard-hit balls. Honestly, I’ll just take nothing positive from this.”

Báez, a July 30 trade acquisition from the Chicago Cubs, hit his 28th homer this season and scored three runs. He is hitting .306 (15 of 49) with four homers in 13 games since coming off the injured list Aug. 22.

“From Day One when he showed up in the clubhouse, he’s transmitted a lot good things --- just good vibes and all the things he can do out on the field to help the team win,” manager Luis Rojas said.

New York’s Taijuan Walker remained winless in his last 10 starts, allowing six runs in 4 1/3 innings. Walker surrendered Thomas’ leadoff shot and Bell’s two-run homer in the first, then Juan Soto’s two-run single in the fifth before permitting the tying run to score on a wild pitch.

It was the third time in as many days New York wasted a lead before regrouping to beat the Nationals.

Closer Edwin Díaz blew a two-run advantage in the ninth on Friday, only for the Mets to rally for a 6-2 victory. In the opener of Saturday’s doubleheader, New York scored the first nine runs, gave up the next nine and prevailed 11-9 in nine innings.

Mets: Rojas said OF Dominic Smith is expected to be activated from the bereavement list Monday or Tuesday. … Rojas said C Chance Sisco was available in a “limited capacity.” Sisco left Friday’s game after a collision at home plate in the ninth inning. … New York optioned INF Travis Blankenhorn to Triple-A Syracuse.

Nationals: Washington placed OF Gerardo Parra (right knee inflammation) on the 10-day injured list and recalled LHP Josh Rogers from Triple-A Rochester. … C Keibert Ruiz was out of the lineup with soreness after taking a foul off his knee Saturday. … Manager Dave Martinez said INF Jordy Mercer (left calf strain) is running better and taking grounders, but might need a rehabilitation assignment before being activated.