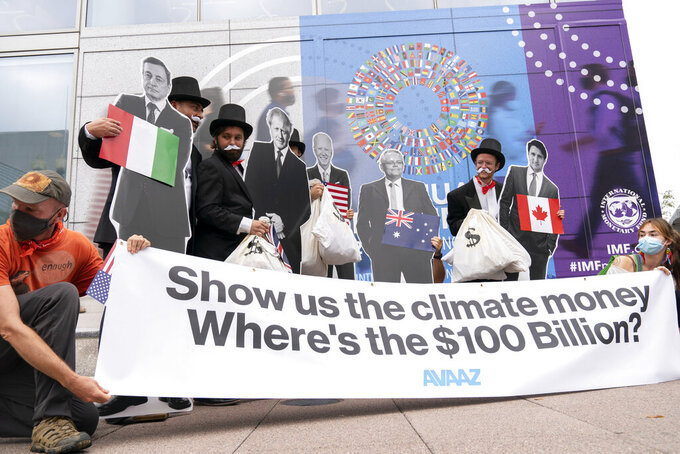 WASHINGTON (AP) — The embattled head of the International Monetary Fund, who successfully fought to keep her job following a data-manipulation scandal, on Wednesday pledged renewed efforts to bolster data integrity while focusing on the main job of helping countries recover from a devastating global pandemic.

IMF Managing Director Kristalina Georgieva said she is glad the IMF's 24-member executive board expressed confidence in her ability to head up the 190-nation agency. The board looked into accusations that Georgieva, while at the World Bank, had pressured staff to boost the rankings of China and other countries in 2018 in an influential business climate report

“The board concluded that it has full confidence in my ability to lead the Fund and it feels great to concentrate on the work at hand,” Georgieva said at a news conference to preview the agenda for this week's annual meetings of the IMF and World Bank in Washington.

Georgieva said that the episode taught her the critical need to make sure that staff working for her feel the ability to raise concerns. She said she planned to meet with IMF staff on Monday to discuss the incident and to explore ways to bolster the reliability of the economic reports the IMF produces.

“I first want to remind everybody that the problem was with one specific, rather controversial report at the World Bank, not with the research and data at the IMF,” she said.

She said the IMF board recognized the “the excellence of the IMF and IMF research” and the strong monitoring system at the agency ensuring the integrity of its data.

The controversy involved a “Doing Business” report that had been produced annually by the World Bank that ranked the business climate of major countries. There were allegations that Georgieva and other top World Bank officials had pressured staff preparing the report to boost China's ranking at a time when the World Bank was lobbying China to increase its financial support for World Bank programs.

After the report from an investigation by a private law firm came out, the World Bank announced it was discontinuing the Doing Business annual rankings. But the incident fueled complaints by critics, including members of Congress, that China had too much influence with institutions such as the IMF and World Bank.

Georgieva said she was thankful to be able to present her side of the case to the IMF board over the past week.

“When we presented finally two sides of the story next to each other, there was no there there,” she told reporters Wednesday.

“That is not to say that I don't take the broader message to make sure that staff can always reach out to superiors ... to signal discontent and disagreement,” she said.

The IMF board announced late Monday night that it was allowing Georgieva to keep her job, an announcement that came after she had a conversation earlier in the day with U.S. Treasury Secretary Janet Yellen.

In a statement describing that talk, the Treasury Department said that the United States, the largest shareholder at both the IMF and World Bank, saw a need to take proactive steps to “reinforce data integrity and credibility at the IMF” and to ensure that whistleblowers are protected.

Georgieva, a Bulgarian economist, is the second woman to head the IMF. She succeeded Christine Lagarde in 2019 after Lagarde left to become head of the European Central Bank.

The finance meetings this week will address efforts to boost IMF and World Bank resources for battling the pandemic in poorer countries, proposals to support the fight against climate change and also discussions to adapt a global corporate minimum tax, something that Yellen has made a top priority.

On Wednesday, finance officials representing the Group of 20 major industrial countries authorized the presentation of the global minimum tax proposal at a G-20 leaders’ summit Oct. 30-31 in Rome. The proposal was endorsed last week by 136 nations.

Yellen said in a statement released by the Treasury Department that the new corporate minimum tax would provide additional revenue that could be used to fight “climate change and reduce economic inequality, protect American jobs from the race to the bottom and deliver for the middle class and working people at home and all over the world.”

The agreement will require action by Congress, where Republicans have expressed strong opposition. Yellen has said she is confident the deal can win congressional approval.

The United States is being represented at this week’s finance meetings by Yellen and Federal Reserve Chairman Jerome Powell.

In its latest World Economic Outlook released Tuesday the IMF slightly downgraded its forecast for global growth this year to 5.9%, compared to 6% in July, blaming the weakness on the surge of COVID cases this summer and increased disruptions of global supply chains.

At a separate news conference Wednesday, World Bank President David Malpass said the world is suffering from a “dramatically uneven recovery” that had already pushed more than 100 million people into extreme poverty.