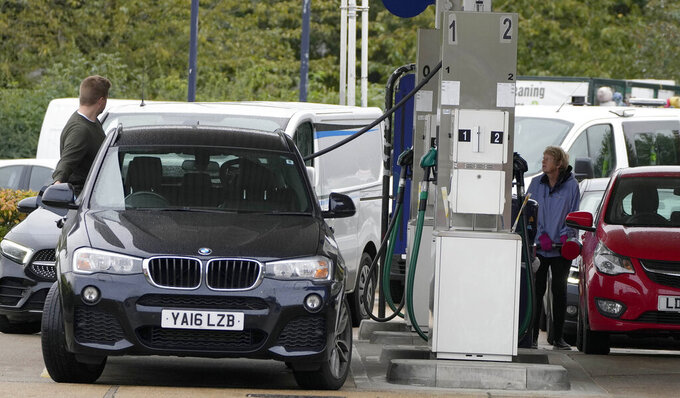 Frank Augstein, ASSOCIATED PRESS
Drivers queue for fuel at a petrol station in London, Thursday, Sept. 30, 2021. Many gas stations around Britain have shut down in the past five days after running out of fuel, a situation exacerbated by panic buying among some motorists. Long lines of vehicles formed at pumps that were still open, blocking roads and causing traffic chaos. Some drivers have had to endure hourslong waits to fill up. (AP Photo/Frank Augstein)

LONDON (AP) — The British economy is no longer the worst performing Group of Seven economy after second quarter growth was revised higher Thursday to reflect a bigger than foreseen increase in consumer spending following the lifting of lockdown restrictions.

However, there are growing concerns that the recovery will lose momentum over the coming months as a result of a shortage of truck drivers, evidenced over the past few days by long lines outside filling stations.

The Office for National Statistics said the U.K.'s economic output increased by 5.5% in the April to June period from the previous quarter, up on the previous estimate of 4.8%. The agency said the economy also contracted by less than thought in the first quarter — 1.4% against 1.6%.

The changes mean that the British economy has gotten nearer to clawing back the 9.7% shrinkage it experienced last year after the coronavirus pandemic struck and prompted widespread curbs on everyday life. At the end of the second quarter, the economy was 3.3% smaller than it was at the end of 2019, the last full quarter before the pandemic had an impact.

Samuel Tombs, chief U.K. economist at Pantheon Macroeconomics, said the upgrades mean the British economy is “no longer the laggard” among the Group of Seven leading industrial nations.

As a result of Thursday's upgrades, the U.K. has leapfrogged Italy, which remains 3.8% smaller than before the pandemic. Its shortfall is identical with Germany's and just worse than France's 3.2%. Of the seven major industrial nations, only the U.S. has an economy bigger than it was before the pandemic.

The biggest driver of Britain's upward revision in the second quarter was household spending, which contributed four percentage points of the 5.5% increase. The country's pandemic restrictions were eased in April to allow outdoor and lifted in May.

The hard-hit hospitality sector did particularly well, benefiting further from the rescheduling of soccer's 2020 European Championship, which saw England advance to the final.

Though recent surveys suggest that growth has slowed since the end of the second quarter, there are hopes that the economy may be back at its pre-pandemic level by the end of 2021 or early next year.

Economists cautioned that the British economy faces a number of headwinds this fall.

One of the main worries is that recent supply chain issues, which are partly blamed on labor shortages related to Britain's departure from the European Union, could really impact on growth. The problems confronting the economy have been particularly evident over the past week. A shortage of truck drivers, tens of thousands of whom left the U.K. after Brexit, led to panic-buying of fuel and long lines at filling stations.

Another concern is that Thursday's ending of an 18-month government salary support program could lead to big increases in unemployment at a time when many households are struggling with surging household bills, notably of energy.