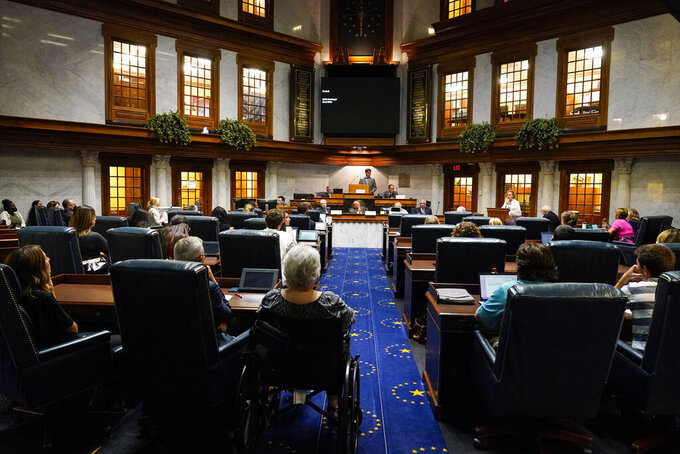 Michael Conroy, ASSOCIATED PRESS
The Indiana Senate Rules Committee takes testimony on a Republican proposal to ban nearly all abortions in the state during a hearing at the Statehouse in Indianapolis, Tuesday, July 26, 2022. (AP Photo/Michael Conroy)

INDIANAPOLIS (AP) — Indiana senators on Friday approved a measure to direct funding toward programs that help pregnant women, children and people who adopt during a divided special session where lawmakers have been wrangling over a proposal to ban nearly all abortions in the state.

The spending bill from Senate Republicans, which passed 46–1, allocates $45 million more in the coming year toward state agencies that “support the health of pregnant women, postpartum mothers, and infants,” especially among low-income families. The wraparound services would be available for families with children under 4 years old and comes with an estimated $5 million expansion in adoption tax credits.

Alone in his dissent was Senate Democratic Leader Greg Taylor, who said that while he thinks it is important to send assistance to families in need, disbursing the funds through the state’s budget agency is “not fiscally responsible.”

The House on Friday also approved a similar bill that comprises millions in tax credits for families adopting, repeals the state tax on children’s diapers and expands eligibility for direct payments through the state’s automatic taxpayer refund law.

Approved by House legislators 93-2, the bill will distribute $225 to taxpayers, and Indiana residents who were not required to file a tax return can sign an affidavit to claim a tax rebate. It’s an echo of Republican Gov. Eric Holcomb’s first call for a special session on inflation relief in June.

Senate Republicans have so far been opposed to issuing direct payments in their legislation. The Senate is also considering an inflation relief bill without a tax rebate, and a Democratic amendment that would have included one was shot down Friday.

The final Senate vote happened about 10 hours after after the Republican-dominated chamber declined to remove exceptions for rape and incest victims in the proposed abortion ban. Indiana is among GOP-controlled states moving quickly to further restrict or ban abortion after the U.S. Supreme Court overturned the landmark Roe v. Wade decision.

Lawmakers wrapped past midnight due to an approximately five-hour delay in Thursday’s session, and Senate restrictions prohibited lawmakers from voting on the ban Friday. The Senate vote is now expected Saturday, and the House could take up the proposal next week.

As for the spending proposal, Republicans have said it shows dedication to mothers and babies, while Democrats say the money isn't enough for services that will be in greater demand if the abortion ban passes. House Democrats emphasized a similar note of dissatisfaction in their own social services bill.

Republican Sen. Travis Holdman called the bill “a start” and addressed Democrats' calls for mental health funding in the bill.

“We have a whole new budget session coming up here in January, and hopefully we can supplement some of the funds and respond in kind as we should to the mental health situation and the needs of young mothers, pregnant women and young children,” Holdman said.

Supporters for previous bills — such as provisions to grant pregnant workers longer breaks or transfers to less physical work — said they would improve Indiana’s infant mortality rate. Federal statistics show the state had the country’s ninth worst in 2020, with 527 infant deaths.

Legislative leaders have acknowledged the abortion ban could increase the state’s Medicaid and other expenses. A ban on most of the approximately 8,400 abortions performed in Indiana in 2021 would add an unknown number to the state’s live births, about 80,000 of which occurred last year, according to the state Health Department.

Arleigh Rodgers is a corps member for the Associated Press/Report for America Statehouse News Initiative. Report for America is a nonprofit national service program that places journalists in local newsrooms to report on undercovered issues. Follow her on Twitter at https://twitter.com/arleighrodgers