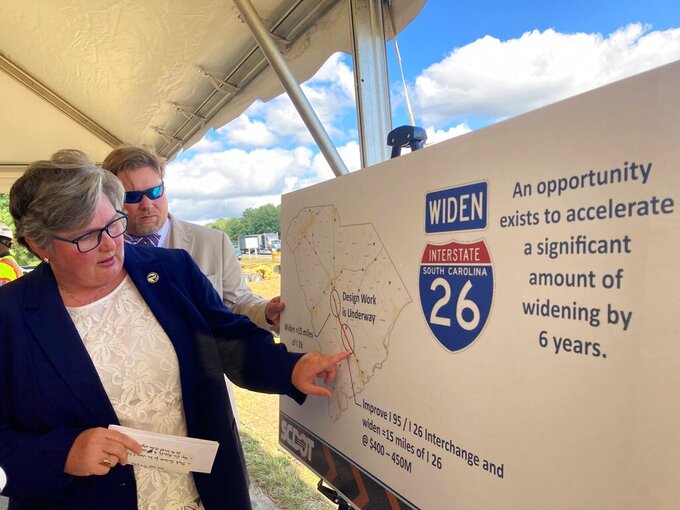 McMaster joined state transportation officials and business leaders south of Columbia at an eastbound exit off the busy highway, calling on legislators to speed up the expansion of one of South Carolina's most economically vital corridors as state has become the 10th-fastest growing in the nation.

“With that comes a lot more travel, a lot more traffic,” Secretary of Transportation Christy Hall said. “And with that, congestion when the infrastructure does not keep up with that growth.”

The General Assembly has about $2.5 billion to spend in federal COVID-19 relief and will likely decide how to use the money in a special session later this month. The funds could go toward any number of needs, such as upgrading water and sewer systems, expanding broadband or replacing lost pandemic revenue.

But an influx of cash toward the I-26 expansion could move up the project timeline by six years and save money on construction costs, Hall said.

The Department of Transportation had previously planned to expand the nearly 70-mile (113-kilometer) corridor over the course of several phases through the end of the decade, working on adding a third lane to segments at either end before moving onto the middle stretch.

A funding boost would allow the agency to put out contracts for most of the widening in the next three to four years instead, officials said.

The stretch that crosses the rural areas between two of the state's largest cities frequently sees traffic jams, delays and accidents. About 66,000 vehicles travel the corridor daily, as beachgoing tourists and other motorists mingle with the 15,000 trucks headed to and from the bustling Port of Charleston.

Modernizing I-26 — from extending entry and exit ramps to designing better interchanges and signs — will help the state remain competitive, said Shawn Godwin, board chair of the South Carolina Trucking Association.

“We all share this critical corridor,” Godwin said. “But, when I-26 bogs down, we all bog down with it.”

Accelerate SC, a group of government and business leaders put together by the governor, made a similar recommendation last week to move the highway project forward with $170 million in virus aid.

The state of South Carolina can use its relief dollars to replace about $453 million in revenue lost due to the pandemic, officials estimate. The $360 million for I-26 would come out of that pot of money.

Officials said they were confident the dollars can be spent before a 2024 deadline.