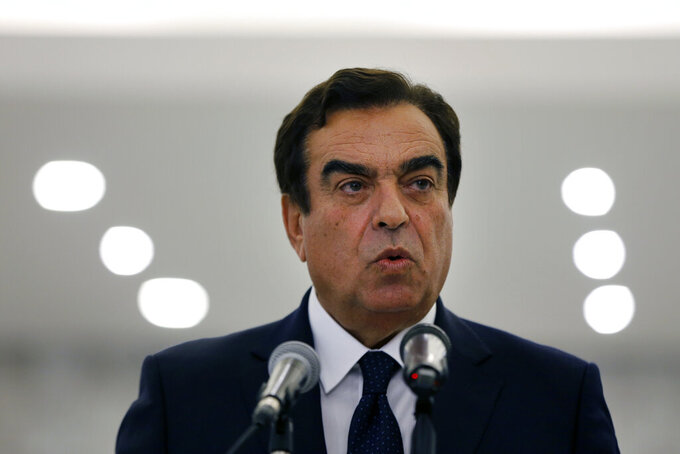 Bilal Hussein, ASSOCIATED PRESS
Lebanon's Information Minister George Kordahi speaks to journalists after a cabinet meeting at the presidential palace in Baabda, east of Beirut, Lebanon, Monday, Sept. 13, 2021. Saudi Arabia on Friday, Oct. 29, 2021 ordered the Lebanese ambassador to the kingdom to leave the country within 48 hours and stopped all imports from Lebanon, a response to comments by Kordahi who described the war in Yemen as a Saudi "aggression." (AP Photo/Bilal Hussein)

BEIRUT (AP) — Lebanon’s ambassadors who were recently asked to leave Bahrain and Saudi Arabia amid an unprecedented diplomatic spat with Gulf countries expressed fear Wednesday the dispute could harm the interests of Lebanese living in the region.

The warning, which included concerns that bilateral relations could further worsen, came as the daily al-Qabas newspaper reported that Kuwait halted issuing visas to Lebanese citizens. The dispute over comments made by a Lebanese Cabinet minister marks the worst row between Lebanon and Saudi Arabia in decades.

The ambassadors spoke during a meeting in Beirut with Prime Minister Najib Mikati, who had earlier asked the minister to resign.

Hundreds of thousands of Lebanese have been living in Gulf nations for decades and transfer billions of dollars every year back to their home country. Any measures against them could have dramatic effects on Lebanon, which is already in the middle of the worst economic crisis in its modern history.

Lebanon’s Information Minister George Kordahi criticized the war in Yemen that a Saudi-led coalition is waging against the Iran-backed Houthi rebels, describing it as “absurd” and an “aggression” by the kingdom. Kordahi made his comments in August before he took the ministerial post and Lebanon has said the remarks about Yemen, aired in late October, do not represent official government views.

Mikati’s office quoted the ambassadors as saying that “every day of delay in solving the crisis will make it more difficult to fix relations and take them back to where they were.”

Saudi Arabia has withdrawn its ambassador from Beirut and asked the Lebanese envoy to leave the kingdom. It has also banned Lebanese imports, undermining the small nation’s foreign trade and depriving it of millions of dollars as it struggles amid the economic meltdown.

Bahrain, the United Arab Emirates and Kuwait have also pulled their top diplomats from Lebanon, deepening the discord.

Kordahi, who was named to the government by a party allied with the militant Hezbollah group, has insisted Yemen’s Houthis have the right to defend themselves. He said he did not mean to offend with his comments, which were recorded before he became minister.

Mikati’s office quoted the Lebanese ambassadors to Saudi Arabia and Bahrain as saying that they have concerns that the crisis could affect the future of relations between Lebanon and Gulf nations as well as “the interests of Lebanese citizens there.”