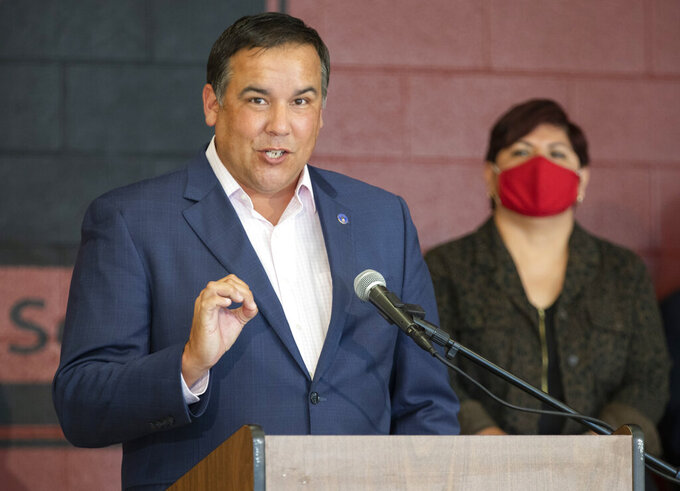 Adam Cairns, ASSOCIATED PRESS
FILE - In this July 28, 2020, file photo, Columbus Mayor Andrew Ginther speaks following the announcement by Columbus City Schools superintendent Talisa Dixon that all students would start the 2020-21 school year online during a news conference at Downtown High School in Columbus, Ohio. Columbus became one of the largest Ohio cities to announce plans Wednesday, Sept. 8, 2021, to reissue a mask mandate amid a rise of cases and hospitalizations as a result of the delta variant. Ginther says he'll issue an executive order in the coming days that would require all residents, regardless of vaccination status, to wear a face mask in indoor places across Columbus. (Adam Cairns/The Columbus Dispatch via AP, File)

COLUMBUS, Ohio (AP) — Ohio's capital and largest city announced plans Wednesday to reissue a mask mandate amid a rise in coronavirus cases and hospitalizations as a result of the delta variant.

Columbus Mayor Andrew Ginther said he'll issue an executive order in the coming days that would require all residents, regardless of vaccination status, to wear a face mask in indoor places across the city.

“This isn't about shutting down, and giving up,” Ginther told reporters. “All of us have three goals that we all share in common: keeping our schools open, keeping our economy open and making sure that our health care workers are not overwhelmed.”

Public health officials joined Ginther to plead with the public Wednesday afternoon about the “dire” situation Columbus hospitals and staff are facing after an optimistic start to the summer came to a screeching halt as the delta variant began to spread throughout the city while vaccinations stagnated.

Less than half of the city's residents have received the COVID-19 vaccine, while a little over half of the state's eligible population have become inoculated.

Meanwhile, the number of statewide cases and hospitalizations are now on track to pass previous records set by the first surge in Ohio last fall.

Over the past two weeks, the average number of daily new cases in Ohio has increased by more than 2,500, a rise of nearly 80%, according to data from Johns Hopkins University.

In Columbus, health officials say hospitals are inundated with COVID-19 patients, including many under the age of 18. Last week, the health department reported 2,500 COVID cases, which is a 37% increase over the previous week.

“What this all means is a significant strain to public health and our hospital systems and it’s worsening," Health Commissioner Dr. Mysheika Roberts said. "The virus is spreading in our community, and we must do something, we must do everything we know to do now to stop it."

The impending executive order will likely face pushback from businesses and state lawmakers who in December passed a bill that curbed both Republican Gov. Mike DeWine's pandemic powers as well as those of local health officials.

The legislation also prevents local health departments from issuing mass school and business orders and allows lawmakers to rescind orders or rules issued in response to an emergency, such as by the Ohio Department of Health.