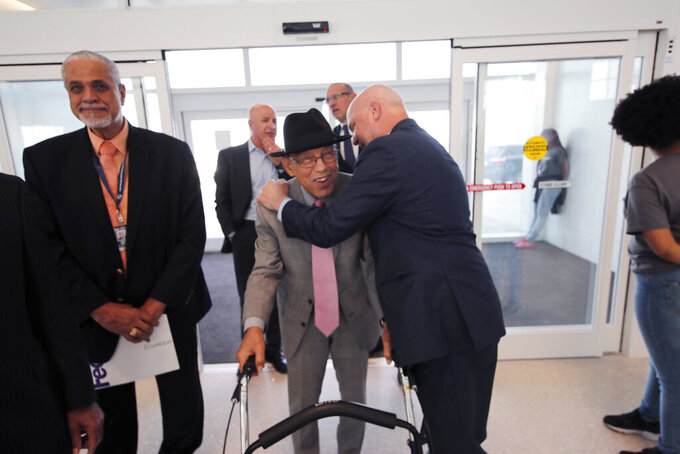 NEW ORLEANS (AP) — A Jesuit university in New Orleans has renamed its newest residence hall after its first Black graduate, his late wife, and their family.

His wife, Blanche Francis, was a civic activist and community leader in New Orleans.

The Loyola University building formerly called Carrollton Hall, after a nearby neighborhood, is now the Blanche and Norman C. Francis Family Hall.

“Norman Francis embodies everything we strive for here at Loyola,” the Rev. Justin Daffron, Loyola's interim president, said in a news release. “He and his late wife, Blanche, have set an example for us all, showing us how to live and love in the way the Gospels have taught us, with compassion, kindness, hope, courage and service to others.”

Daffron said the Francis family, which also includes six children and 11 grandchildren, has made many contributions to both schools, the city, state, country and Catholic Church.

A resolution passed by Loyola's Board of Trustees recognized Norman Francis for a “life and vocation distinguished by his selfless and successful service” in a variety of capacities. Blanche Francis, a volunteer for many organizations, was “the take-charge Mom who made it easy for her husband to be the take-charge president,” the resolution said.

Norman Francis served in the Army and U.S. Attorney’s Office after getting his law degree, and became deeply involved in the Civil Rights movement while dean of men at Xavier, his college alma mater. After Hurricane Katrina flooded New Orleans, he chaired the Louisiana Recovery Authority.

He was Xavier's first Black and first lay president and the second African American president of a Catholic university in the United States.

Under Francis, Xavier produced more African American graduates who went on to medical school than any other college or university.

Francis has received the Presidential Medal of Freedom and the Laetare Medal from the University of Notre Dame. He has served as adviser to eight U.S. presidents on education and rights issues and received more than 40 honorary degrees.

In 2020, New Orleans renamed a street along Xavier's campus for Francis, changing the name from that of Confederate President Jeff Davis.