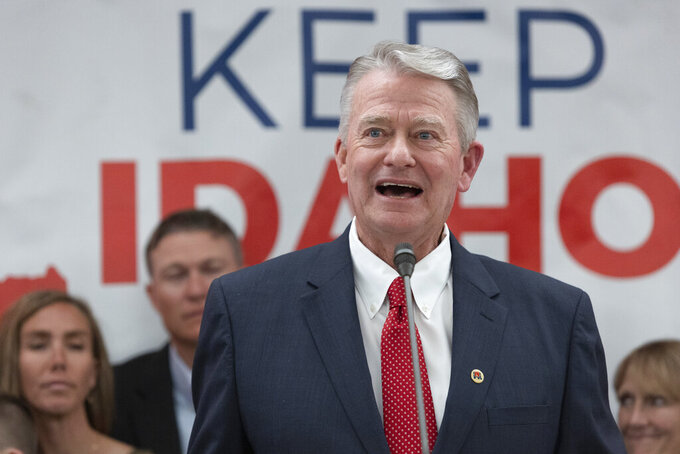 BOISE, Idaho (AP) — Idaho Gov. Brad Little won the GOP gubernatorial primary by beating a Trump-backed challenger who had repeatedly criticized the incumbent for not being conservative enough and who downplayed the loss on Wednesday.

The intraparty contest Tuesday between Little and Lt. Gov. Janice McGeachin was an example of the choice GOP voters face nationwide between established candidates and insurgents endorsed by former President Donald Trump.

Little and McGeachin frequently feuded over coronavirus precautions and the role of government. Last year McGeachin twice attempted a power grab when Little was out of state on business.

“I felt the honor of serving the great state of Idaho in good times and in tough times,” Little said at a Republican gathering in downtown Boise late Tuesday after winning the primary. “Once again I’m humbled by the awesome opportunity to serve and work for the great people of Idaho.”

Little won 53% of the vote against seven challengers, including McGeachin, who received about 32%.

McGeachin was at a private gathering in Boise where reporters weren’t allowed. She issued a statement posted on Facebook on Wednesday.

“Last night, Idahoans showed Brad that he does not have a mandate,” she said. “Brad Little barely managed a majority even with tens of thousands of democrats and liberals infiltrating the Republican Primary to support him. Conservatives must get smarter and understand that we beat ourselves when we don’t unite behind each other, we must never do that again. The establishment counts on that, and we fell for it.”

Little didn’t gloat in his speech Tuesday, with much of it sounding like a standard stump speech recounting the state’s red-hot economy and large income tax cuts the last two years as well as taking shots at Democrats.

“The leftist states are dysfunctional places with broken policies that limit opportunity,” Little said. “We would like to build a wall around Idaho and make California pay for it.”

Idaho is among the nation’s fastest-growing states, with some of those new residents coming from California.

Republicans are almost guaranteed of winning in the general election as Democrats haven’t held the governor’s office since 1995 or statewide office since 2007. Republicans hold supermajorities in the House and Senate, and Democrats aren’t even contesting more than half of the Legislature’s 105 seats.

Various groups encouraged independents and Democrats to register as Republicans to halt a slate of far-right candidates, including McGeachin. The number of voters doing that appeared to be too small to make a significant difference, but Alicia Nelson took that path and voted for Little over McGeachin, as well as other mainstream Republicans.

“In Idaho you have a lot of crazy people, so you kind of have to weed them out to get to somewhat logical thinking,” she said.

Bill Brown stuck with the Democratic primary as he has done for decades, but acknowledged the dominance of the Republican party in Idaho.

“It has turned so far right it’s kind of scary,” he said.

Little was attending a Republican Governors Association meeting in Tennessee last May when McGeachin issued an executive order banning mask mandates. Little quickly rescinded the order and decried her actions as an “irresponsible, self-serving political stunt.” He had never issued statewide COVID-19 mask mandates, instead saying that local officials should be able to do what they see fit.

She tried it again a few months later when Little was away, issuing an executive order that expanded on a directive that no Idaho government could require vaccine passports. She sought to add K-12 schools and universities to the ban.

McGeachin accused Little, the first-term governor, of rejecting conservative principles, writing on Twitter that “protecting individual liberty means fighting against tyranny at ALL levels of government.”

Little, a rancher from southwest Idaho, served as lieutenant governor from 2009 to 2019 before becoming governor. He touts the record $600 million income tax cut he signed earlier this year that includes a one-time $350 million in rebates and $250 million in permanent income tax reductions going forward for people and businesses.

The 68-year-old Little also highlighted his “Leading Idaho” plan that includes a record $300 million education spending increase, plus spending $200 million ongoing for roads and bridges, the largest ever increase for transportation.

The 59-year-old McGeachin had, and frequently touted, an endorsement by Trump, who won Idaho with 64% of the vote in the last general election. McGeachin has also promoted Trump’s lies that the 2020 election was stolen from him through mass voter fraud.