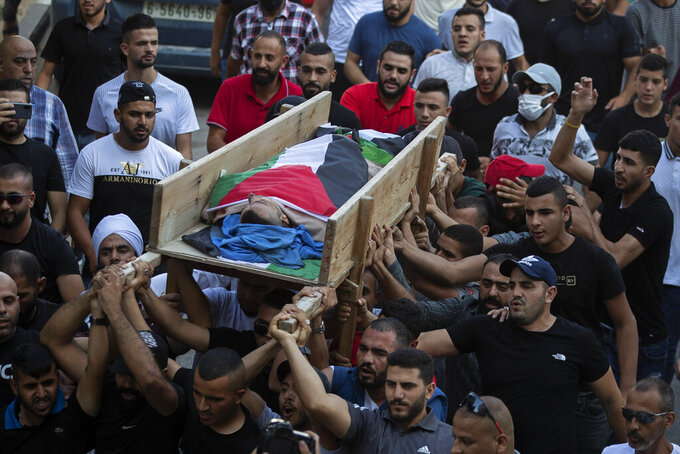 Majdi Mohammed, ASSOCIATED PRESS
Palestinian mourners carry the body of Raed Jadallah, 39, who was killed by Israeli forces at the western entrance of his village while returning from work in the early hours of Wednesday morning, during his funeral, in the West Bank village of Beit Ur al-Tahta, Wednesday, Sep. 1, 2021. (AP Photo/Majdi Mohammed)

BEIT UR AL-TAHTA, West Bank (AP) — Hundreds of people on Wednesday mourned the death of a man Palestinian health officials said was killed by Israeli forces in the occupied West Bank.

Raed Jadallah, 39, a resident of Beit Ur al-Tahta near Ramallah, was buried on Wednesday.

According to the official Palestinian news agency Wafa, Jadallah was a gardener and was shot at the western entrance of his village while returning from work in Israel. The circumstances of the death were unclear, as there were no conflicts in the area when the shooting happened Tuesday night.

The Palestinian foreign ministry described the killing as a “heinous crime” and blamed the Israeli army for Jadallah's death. The Israeli military has not commented on the circumstances of the incident.

“They are catching us as if they are fishing," Mohammad Jadallah, Raed’s uncle, said of his nephew's killing. “This is not acceptable.”

Ibrahim Zaki, a relative of the slain man, told Palestine TV that Raed Jadallah did not show up to meet a friend as arranged after work. Raed's son and the friend had heard that there had been shooting in the area near the meeting place, called his phone and went to look for him.

The friend said they followed traces of blood on the ground and found Raed's body nearby. Zaki said it appeared that Jadallah had been shot from a hill on which the Israeli military is often located.

Jadallah was born in Jerusalem and left behind four children, according to Palestinian television.