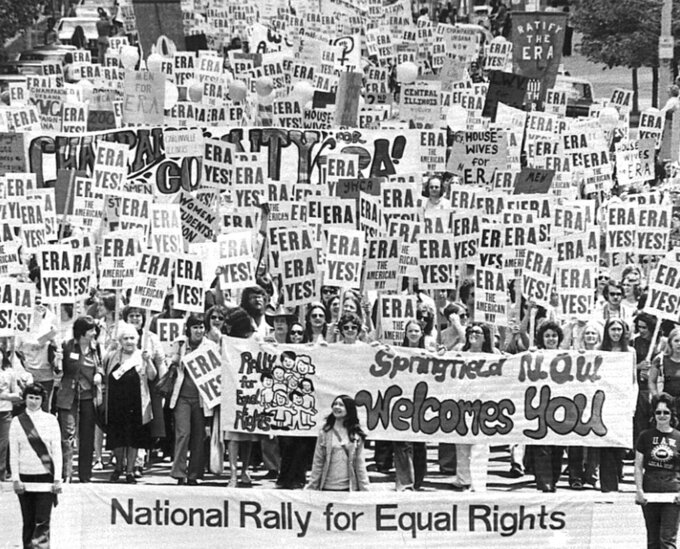 Anonymous, ASSOCIATED PRESS
FILE - Marchers descend on the Capitol in Springfield, Ill., to demonstrate for the passage of the Equal Rights Amendment, May 16, 1976. Reproductive freedom was not the only demand of second-wave feminism, as the women's movement of the '60s and '70s is known, but it was surely one of the most galvanizing issues, along with workplace equality. (AP Photo, File)

At 88, Gloria Steinem has long been the nation’s most visible feminist and advocate for women’s rights. But at 22, she was a frightened American in London getting an illegal abortion of a pregnancy so unwanted, she actually tried to throw herself down the stairs to end it.

Her response to the Supreme Court’s decision overruling Roe v. Wade is succinct: “Obviously,” she wrote in an email message, “without the right of women and men to make decisions about our own bodies, there is no democracy.”

Steinem’s blunt remark cuts to the heart of the despair some opponents are feeling about Friday's historic rollback of the 1973 case legalizing abortion. If a right so central to the overall fight for women’s equality can be revoked, they ask, what does it mean for the progress women have made in public life in the intervening 50 years?

“One of the things that I keep hearing from women is, ‘My daughter’s going to have fewer rights than I did. And how can that be?’” says Debbie Walsh, of the Center for American Women and Politics at Rutgers University. “If this goes, what else can go? It makes everything feel precarious.”

Reproductive freedom was not the only demand of second-wave feminism, as the women’s movement of the ’60s and ’70s is known, but it was surely one of the most galvanizing issues, along with workplace equality.

The women who fought for those rights recall an astonishing decade of progress from about 1963 to 1973 including the right to equal pay, the right to use birth control, and Title IX in 1972 which bans discrimination in education. Capping it off was Roe v. Wade a year later, granting a constitutional right to abortion.

Many of the women who identified as feminists at the time had an illegal abortion or knew someone who did. Steinem, in fact, credits a “speak-out” meeting she attended on abortion in her 30s as the moment she pivoted from journalism to activism — and finally felt enabled to speak about her own secret abortion.

“Abortion is so tied to the women’s movement in this country,” says Carole Joffe, a sociologist at the University of California, San Francisco medical school who studies and teaches the history of abortion. “Along with improved birth control, what legal abortion meant was that women who were heterosexually active could still take part in public life. It enabled the huge change we’ve seen in women’s status over the last 50 years.” Joffe says many women, like her, now feel that the right to contraception could be at risk — something she calls “unthinkable.”

One of them is Heather Booth. When she was 20 and a student in Chicago, a male friend asked if she could help his sister obtain an abortion. It was 1965, and through contacts in the civil rights movement, she found a way to connect the young woman, nearly suicidal at the prospect of being pregnant, to a doctor willing to help. She thought it would be a one-off, but Booth ended up co-founding the Jane Collective, an underground group of women who provided safe abortions to those in need. In all, the group performed some 11,000 abortions over about seven years — a story recounted in the new documentary “The Janes.”

Booth, now 76, sees the Roe v. Wade upheaval as a chilling challenge to the triumphs of the women’s movement.

“I think we are on a knife’s edge,” she says. “On the one hand, there’s been 50 years of a change in women’s condition in this society,” she adds, recalling that when she was growing up, women could only respond to employment ads in the “women’s section,” to list just one example.

“So there’s been an advance toward greater equality, but … if you ask about where we stand, I think we are on a knife’s edge in a contest really between democracy and freedom, and tyranny, a dismantling of freedoms that have been long fought for.”

Of course, not every woman feels that abortion is a right worth preserving.

Linda Sloan, who has volunteered the last five years, along with her husband, for the anti-abortion organization A Moment of Hope in Columbia, South Carolina, says she values women’s rights.

“I strongly believe and support women being treated as equals to men … (in) job opportunities, salary, respect, and many other areas,” she says. She says she has tried to instill those values in her two daughters and two sons, and upholds them with her work at two women's shelters, trying to empower women to make the right choices.

But when it comes to Roe v. Wade, she says, “I believe that the rights of the child in the mother’s womb are equally important. To quote Psalm 139, I believe that God ‘formed my inner parts’ and ‘knitted me together in my mother’s womb.’”

Elizabeth Kilmartin, like Sloan, volunteers at A Moment of Hope and is deeply pleased by the court's decision.

In her younger years she considered herself a feminist and studied women's history in college. Then, over the years she came to deeply oppose abortion, and no longer considers herself a feminist because she believes the word has been co-opted by those on the left. “No women’s rights have been harmed in the decision to stop killing babies in the womb,” Kilmartin says. “We have all kinds of women in power. Women aren't being oppressed in the workplace anymore. We have a woman vice president ... It’s just ridiculous to think that we’re so oppressed."

Cheryl Lambert falls squarely in the opposing camp. The former Wall Street executive, now 65, immediately thought back to the gains she made earlier in her banking career, becoming the first woman to be named an officer at the institution she worked for. She calls the court decision “a sucker punch.”

“My thought was, what era are we living in?” Lambert says. “We are moving backwards. I’m just furious on behalf of our children and our grandchildren.”

Lambert herself needed an abortion as a young mother when the fetus was found to carry a genetic disease. “I thought it would get easier, not harder, to have an abortion in this country,” she says.

Now, she and many other women fear a return to dangerous, illegal abortions of the past — and a disproportionate impact on women without the means to travel to abortion-friendly states. Still, many are trying to see a positive side: that as bleak as the moment may seem, change could come via new energy at the ballot box.

“We're in it for the long haul,” says Carol Tracy, of the Women’s Law Project in Philadelphia.

Steinem, too, issued a note of resolve.

“Women have always taken power over our own bodies, and we will keep right on,” she wrote in her email message. “An unjust court can’t stop abortion, but it guarantees civil disobedience and disrespect for the court.”

For AP’s full coverage of the Supreme Court ruling on abortion, go to https://apnews.com/hub/abortion.