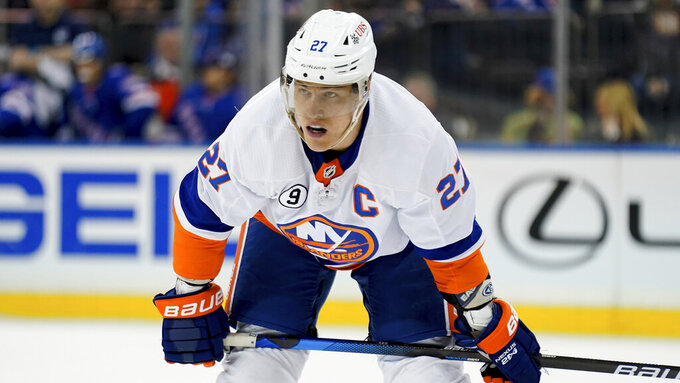 John Minchillo, ASSOCIATED PRESS
FILE - New York Islanders left wing Anders Lee (27) sets up for a face-off during the first period of an NHL hockey game against the New York Rangers, on April 1, 2022, in New York. After missing the playoffs for the first time in four years, the New York Islanders had a long offseason to reflect on what went wrong. With a new coach and mostly the same roster that reached the Stanley Cup semifinals the previous two years, they are ready to try to rediscover their winning ways and return to the postseason. (AP Photo/John Minchillo File) 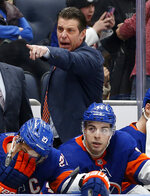 After missing the playoffs for the first time in four years, the New York Islanders had a long offseason to reflect on what went wrong.

With a new coach and mostly the same roster that reached the Stanley Cup semifinals the previous two years, they are ready for a fresh start.

“It was nice to reset, have a longer summer to regroup,” center Brock Nelson said. “I think everyone has the belief and confidence in the group that we have. ... We’re not too far removed from a couple of pretty good runs where we can get right back there.”

The Islanders’ difficult season last year began with 13-game road trip while their new arena was being finished, and saw the team hit with injuries and a coronavirus outbreak that resulted in an early 11-game skid the did not recover from.

“When we needed to play well, we didn’t,” captain Anders Lee said. “We put ourselves behind the eight ball too early in the year and we were just chasing for a long period of time.”

The big change in the offseason was behind the bench as general manager Lou Lamoriello replaced coach Barry Trotz with Lane Lambert, the top assistant during Trotz’s four years at the helm.

He is counting on that familiarity making the transition easier and helping the team get off to a good start.

“We’ve talked about it being a little bit of an edge coming in, being just a little bit of a step ahead of where I would have been if I didn’t know anybody,” Lambert said. “It’s just about getting the guys prepared. If you do that and if they do that, then you hit the ground running.”

The Islanders have been a defense-first team the last several years, allowing the seventh-fewest goals (2.82 per game) in the NHL last season. That focus isn’t expected to change, though Lambert must find ways to get more offense out of a team that was 23rd in scoring (2.79).

The offense will again be led by centers Mathew Barzal (15 goals, 44 assists), Nelson (career-high 37 goals, 22 assists) and Lee (28 goals, 18 assists). With the departures of veteran defensemen Andy Greene and Zdeno Chara, newcomer Alexander Romanov and fellow youngsters Robin Salo and Grant Hutton will have opportunities to make valuable contributions on the blueline.

Ilya Sorokin (26-18-8, 2.40 goals-against average, .925 save percentage) is back for this third NHL season after taking the reins as the starting goalie while making a career-high 52 starts. Semyon Varlamov (10-17-2, 2.91 GAA), key to the Islanders’ run in the 2021 playoffs, gives the Islanders one of the best tandems in the league.

Barzal is going into the final year of a three-year, $21 million contract that will make the 25-year-old a restricted free agent next summer. He has expressed a desire to remain with the Islanders and confident a new deal can be worked out.

Barzal’s situation is different from other prominent Islanders, who unlike him, were pending unrestricted free agents — John Tavares, who left for Toronto after Barzal’s rookie season in 2018, and Lee, who re-signed with the team the following year.

“It’s a big year for anyone that’s going through this,” Lee said. “It’s just a part of how this all works and I’m not worried about how that’s going to affect him.”

Unlike last season's long road trip to kick things off, the Islanders begin this season at home against Florida on Oct. 13. The first four and six of the first nine games are on home ice. The first road game is Oct. 22 against Tampa Bay, which ousted the Islanders their last two trips to the playoffs.

The longest road trip is a five-game stretch Dec. 13-22 that starts in Boston and finishes against the cross-town Rangers with a trip to Arizona, Vegas and Colorado in between.