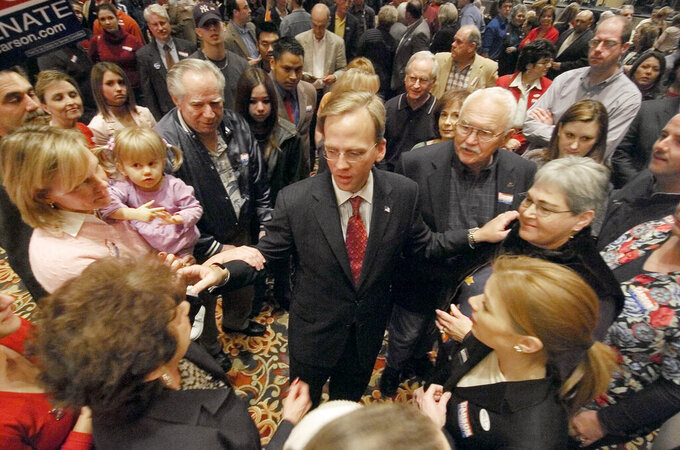 PAUL HELLSTERN, ASSOCIATED PRESS
FILE - In this Nov. 2, 2004 file photo, Oklahoma Democratic congressman Brad Carson thanks supporters after giving his concession speech at his watch party at a hotel in Tulsa, Okla. Carson lost to Republican Tom Coburn. The University of Tulsa has named Carson as its next president. The university's Board of Trustees voted Monday, April 5, 2020, to select Carson to become the private university's 21st president. (AP Photo/The Oklahoman, Paul Hellstern File)

The university’s Board of Trustees unanimously selected Carson, 54, after a national search that began in July. Carson’s term officially begins on July 1.

He replaces interim president Janet Levit, who was appointed when former president Gerard Clancy stepped down in January 2020 because of health concerns.

“Brad is an experienced and empowering leader and public servant who has demonstrated his ability to competently lead complex organizations through change," board chair Dana Weber said in a statement.

Carson, a Rhodes scholar, served two terms as a Democratic congressman from Oklahoma’s 2nd Congressional District from 2001 to 2005. He went on to serve as secretary of the U.S. Army and acting under secretary of defense for personnel and readiness at the U.S. Department of Defense under former President Barack Obama.

Most recently, Carson has been a professor at the University of Virginia since 2018.