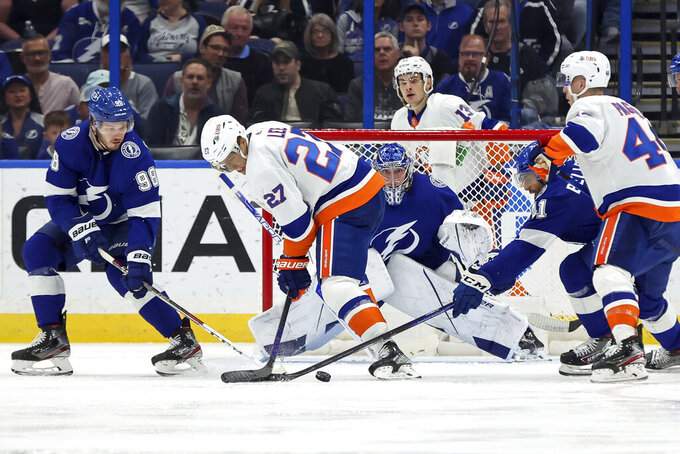 TAMPA, Fla. (AP) — Andrei Vasilevskiy made 25 saves, Anthony Cirelli had a tiebreaking goal and a fight, and the Tampa Bay Lightning beat the New York Islanders 4-1 on Monday night.

Tampa Bay also got goals from Mathieu Joseph, Brayden Point and Steven Stamkos. The defending Stanley Cup champions are 6-0-2 over the last eight games, allowing two goals or fewer in seven of them.

“We're defending,” Lightning coach Jon Cooper said. “You're giving yourself a chance to get points.”

Mathew Barzal scored for the Islanders, who have lost three in a row. Semyon Varlamov stopped 24 shots. New York has been outscored 13-3 during the current skid.

“We're working for those chances, they're not going in right now,” Islanders left wing Anders Lee said. “It's one of those stretches where that can lead to some frustration. I think right now we've just got to find a way to stick together, stick to it and eliminate some of the mistakes on the other end.”

It was the Islanders’ 12th of 13 games during a season-opening road trip. New York will play its home opener at the new UBS Arena on Saturday night against Calgary.

The teams met for the first time since Tampa Bay beat the Islanders 1-0 in Game 7 of the Stanley Cup semifinals last June.

Vasilevskiy had several in-close saves, including one on Lee during a second-period power play.

Barzal opened the scoring 2:53 into the first on a breakaway, but Joseph tied from the low slot 23 seconds later.

Cirelli put the Lightning up 2-1 shortly after a power play ended with 37.3 seconds left in the first.

There were several scrums and a fight between Cirelli and Brock Nelson during the second. Nelson received the initial penalty for charging, while Cirelli was given an instigating minor and 10-minute misconduct.

Cirelli departed shortly after returning in the third after he was hit in the face by deflected shot.

“I can't sit here and say the mirror is going to be his friend for the next few days,” Cooper said.

New York failed to score on three power plays and are 4 for 31 overall.

“That's been a point of emphasis, we've been working on it, talking about,” Islanders right wing Josh Bailey said. “We've just got to stick with it.”

Islanders: D Andy Greene became the 358th player to play in 1,000 games. … Chara is the 11th player to appear in 1,620 games. … Ryan Pulock played in his 263rd consecutive game, breaking Denis Potvin’s team record for defensemen. Pulock left after taking a shot off his leg in the second but returned.

Islanders: At Florida on Tuesday night in the finale of their season-opening stretch of road games.

Lightning: At Philadelphia on Thursday night.