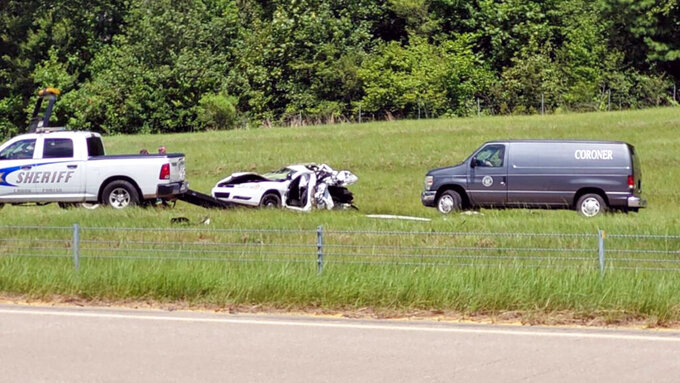 Randy Bain, ASSOCIATED PRESS
This image taken from video and provided by KTBS-TV shows a Caddo Parish Sheriff’s Office patrol car that was hit from behind by a Kia, killing the deputy, who was diverting traffic around an earlier wreck. (Randy Bain/KTBS-TV via AP)

SHREVEPORT, La. (AP) — A memorial service will be held Saturday for an 82-year-old sheriff's office volunteer whose patrol car was hit from behind as he worked at a crash site, the Caddo Parish Sheriff’s Office said Tuesday.

The service for Auxiliary Deputy Lonnie Thacker Sr., of Keithville, will begin at 10:30 a.m. Saturday at Calvary Baptist Church in Shreveport, the sheriff's office said.

There is also a memorial display honoring Thacker at the Caddo sheriff’s south substation, a news release said.

Thacker had been assigned to direct traffic around two crashed trucks. He was sitting in his marked patrol car with its emergency lights flashing Friday when a Kia Seltos SUV hit it, Louisiana State Police have said.

The state police news release said the SUV's driver may have been distracted, but it did not give details.

The sheriff’s office said Thacker had joined the auxiliary program in 2001 and regularly logged more than 500 hours a year helping with such duties as traffic control, funeral escorts and neighborhood patrols.