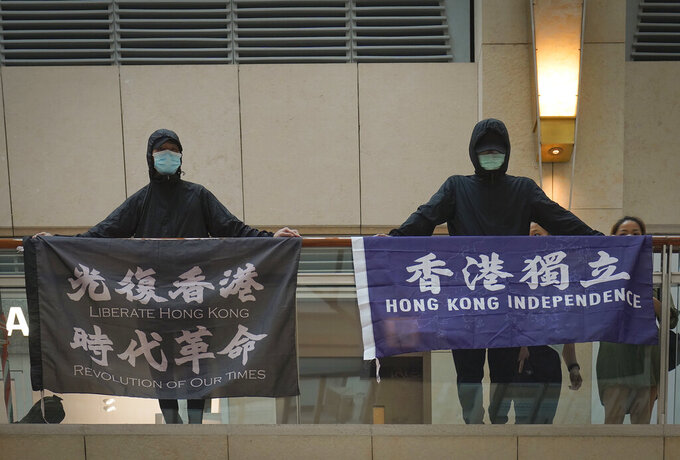 Vincent Yu, ASSOCIATED PRESS
FILE - In this June 9, 2020, file photo, protesters show a banner "Librate Hong Kong, Revolution of out time," left, and "Hong Kong Independence" in a shopping mall during a protest in Hong Kong. Hong Kong police have arrested a 40-year-old man on suspicion of using seditious words after a flag with a banned protest slogan was seen hanging outside his apartment, Monday, June 22, 2021. (AP Photo/Vincent Yu, File)

HONG KONG (AP) — Hong Kong police have arrested a 40-year-old man on suspicion of using seditious words after a flag with a banned protest slogan was seen hanging outside his apartment.

Police received a report on Monday from a passerby who spotted the flag bearing the banned slogan “Liberate Hong Kong, the revolution of our times” hanging from a laundry rack outside the apartment in the Mong Kok neighborhood in Kowloon, police said Tuesday.

Officers arrested the man, who remains in detention, police said. He was not identified. If charged and convicted of sedition, first-time offenders face up to a 5,000 Hong Kong dollar ($644) fine and two years' imprisonment.

The slogan “Liberate Hong Kong, the revolution of our times” was often chanted by protesters during months of anti-government demonstrations in 2019 as they demanded broader democratic freedoms during a time when China began exerting more control over the semi-autonomous city.

A government notice last July said the “Liberate Hong Kong, the revolution of our times” slogan connotates a call for independence and subversion of state power.

“If the police have reasonable suspicion (of sedition), by hanging a flag saying “Liberate Hong Kong” … did it mean to liberate Hong Kong people from the existing regime? That would be seditious,” said pro-Beijing lawmaker Regina Ip.

“I can’t say that the police have overreacted. But ultimately whether that person has committed the offense of sedition, that is for the courts to decide,” she said.

Authorities have cracked down on dissent in the city since the 2019 protests, arresting over 100 people under the national security law and bringing charges against most of the city’s major pro-democracy activists, many of whom are now behind bars or have fled abroad.

Last week, police arrested five top editors and executives at the pro-democracy paper Apple Daily and froze $2.3 million in assets of three companies linked to the paper. The newspaper says it may have to close this Saturday as a result.

On Tuesday, a Hong Kong court convicted American lawyer Samuel Bickett in the alleged assault of a plainclothes police officer in 2019.

The altercation ensued when Bickett saw the officer using his baton to stop a man who had jumped the turnstiles at a subway station. In a video circulating on social media, a man identified as Bickett was seen wrestling with the officer and attempting to take his baton away.

Bickett was denied bail and remanded in custody ahead of his sentencing next month.

On Wednesday, Tong Ying-kit, who flew a flag with the protest slogan while driving his motorcycle into a group of police officers last July, is to go on trial for allegedly inciting secession. He is the first person to stand trial under the national security law since the legislation came into effect last June.