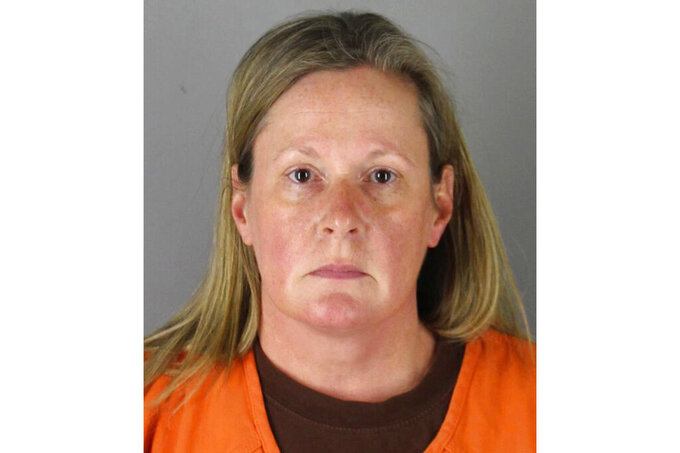 Uncredited, ASSOCIATED PRESS
FILE - This undated file booking photo provided by the Hennepin County, Minn., Sheriff shows Kim Potter, a former Brooklyn Center, Minn., police officer. Potter, a former suburban Minneapolis police officer who has said she meant to use a Taser instead of a handgun when she shot and killed Daunte Wright in April is laying out her potential defenses ahead of her November 2021 trial. (Hennepin County Sheriff via AP, File)

MINNEAPOLIS (AP) — News organizations made a fresh plea Monday to the judge overseeing the case of a former suburban Minneapolis police officer charged in the death of Daunte Wright, asking her to allow live video coverage of the trial because of the continuing threat of COVID-19 and the strong public interest.

Judge Regina Chu ruled in August that there will be no recording or livestreaming of Kim Potter's trial, which is due to start Nov. 30.

Chu said the public and media would have ample space to view the trial in the courtroom or in designated overflow rooms. And she noted that the defendant had objected. Chu said the “extraordinary circumstances” that led a different judge to allow live audiovisual coverage of the trial of ex-officer Derek Chauvin in the death of George Floyd no longer applied.

But a coalition of media organizations, including The Associated Press, asked the judge in filings Monday to reconsider. Attorney Leita Walker wrote that COVID cases have spiked since August and may not abate before the trial. And she said the resulting limitations to access to proceedings at the courthouse apparently will mean a total exclusion of the public and all but a few members of the media.

Walker said the only way to provide “reasonable and meaningful access” is to allow live video coverage.

Potter, a former Brooklyn Center officer who is white, fatally shot Wright, a 20-year-old Black motorist, on April 11. She has said she meant to use her Taser instead of her handgun as Wright was trying to drive away from officers. She’s charged with first- and second-degree manslaughter.

Under Minnesota court rules, audio and video coverage of a criminal trial is barred unless all parties consent. Coverage of sentencings is allowed without consent, unless the judge finds cause to prohibit it. Judge Peter Cahill made an exception for Chauvin's case to balance his right to a public trial and the public’s right to access against the risks of the pandemic.

Chauvin’s trial was Minnesota’s first criminal case in which gavel-to-gavel coverage was allowed. Afterward, Minnesota Supreme Court Chief Justice Lorie Gildea ordered a standing court advisory committee to study whether the current rules on audio and video coverage should be amended, and to report back by July 1, 2022.

The media coalition cited the resentencing last week of another former Minneapolis police officer, Mohamed Noor, in the 2017 fatal shooting of Justine Ruszczyk Damond, at which only 16 seats in a 50-person courtroom were available for the press and public.

Walker called that unacceptable and said restrictions on access to Potter's trial apparently will be even more limited, citing emails from court personnel. If Chu won't allow video coverage, the attorney said, the judge should at least move the trial to the largest courtroom available and allow it to be filled to capacity.