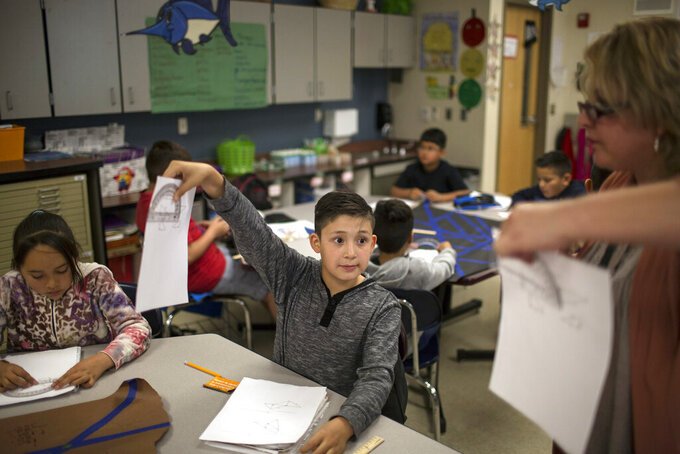 Rodrigo Abd, ASSOCIATED PRESS
FILE - In this March 31, 2017, file photo a fifth grade student shows his geometry work to a teacher at Columbus Elementary School, in Columbus, N.M. New Mexico's elementary school students may be falling further behind, according to a review of preliminary academic data by legislative analysts that shows less than one-third of students are proficient. In 2020, students faced school closures, were absent more frequently, and had limited access to online learning. (AP Photo/Rodrigo Abd, File)

SANTA FE, N.M. (AP) — The proficiency of New Mexico's elementary students in math and reading has dropped significantly amid the pandemic, with only 31% achieving it, according to a review of preliminary academic data made public Wednesday.

The drop in math and reading proficiency from 37% in the 2018-2019 school year, before the pandemic began, has prompted legislators to suggest that elementary students should spend longer hours in class or face a longer school year.

The report by legislative analysts presented to the powerful Legislative Finance Committee estimated that students lost between 10 and 60 days of learning time because of the coronavirus pandemic. Even before the pandemic, New Mexico students spent fewer school days than their counterparts in many other states. Some rural New Mexico schools have four-day school weeks.

Amid the pandemic, the state's students faced school closures, were absent more frequently, and many had limited access to online learning.

Nonpartisan legislative policy researchers said in the report that about half of the state's school districts rejected funding for extra school days because of criticism from parents and staff.

The extra school funding has been part of a yearslong effort by the Legislature to increase learning time for students while allowing communities the local control to accept or reject additional time in school for students.

Some legislators said after the report was released that the state should consider mandating between 10 and 25 additional days to the school year. New Mexico students must be in school 180 days annually. But some schools get waivers allowing their students to spend as few 150 days if those days are proportionally longer.

“Maybe we need to do more mandates, take education more serious and have a sense of urgency,” said Sen. Bill Tallman, a Democrat from Albuquerque.

Others criticized longer school years for children, calling for more research and days off from school for Indigenous holidays important in many school districts.

“Assimilation in Indian country — that has been the purpose of (education) and adding on 25 days the calendar takes those kids out of my community 25 more days,” said Jeremy Oyenque, director of Youth and Learning at Santa Clara Pueblo, an Indigenous tribe north of Santa Fe.

Mandating an increase in school days would most dramatically impact a small number of rural school districts that have four-day school weeks. They are allowed to cram more school hours into longer days to give students the shorter school week.

“Up in my district, there are quite a lot of schools that go four days. And I think they spend less time putting up their pencils and more time studying,” said Rep. Jack Chatfield, a Republican from the northeastern community of Mosquero. “I would really encourage us to do a little bit of research as to how those schools with a four-day school (week) compare in their testing.”

The legislative report suggests the drop in learning proficiency from 39% to 31% could be even worse than the preliminary data suggests because student testing was optional and likely drew students who had better access to school during the pandemic.

Also, some students who took the tests at home received help from parents and scored higher than they should have, the report said.

The testing is required by the federal government, but the New Mexico Public Education Department received a testing waiver because of the pandemic. Normally, 95% of the state's students must be tested, but the waiver allowed as little as 1% to be tested.

The testing cited in the report included around 80% of elementary students in grades that were tested, researchers said. White students were significantly overrepresented in the testing by around 2.5%.

Groups that had less access to remote learning during the pandemic — Native American students, students with disabilities, and low-income students — were underrepresented in the testing by between around 2.5% and around 9%.