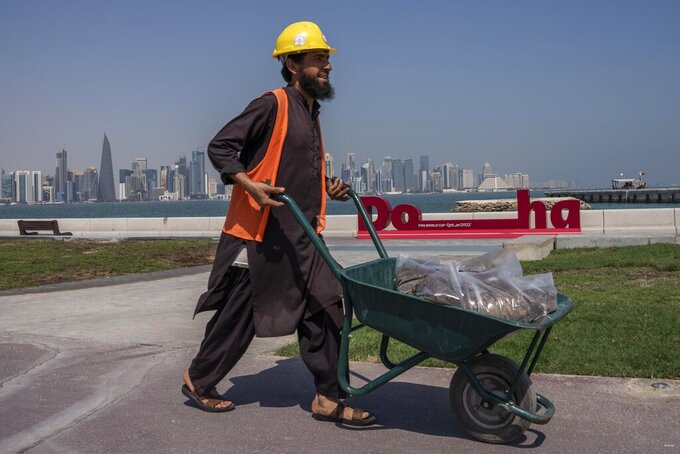 French construction company Vinci said on Monday that one of its subsidiaries has been summoned by an investigating judge to answer charges that it did not respect the rights of migrant workers who were hired to build infrastructure for the World Cup in Qatar.

The charges relate to a complaint dating back to 2015 that was filed by French advocacy group Sherpa against Vinci Construction Grands Projets and the French executives of its Qatari subsidiary, including accusations of using “forced labor."

The Nanterre prosecutor had closed the case without further action in 2018, but Sherpa, which was joined by several former workers, filed a new complaint that led to the opening of a judicial investigation.

Qatar has faced intense scrutiny ahead of the tournament for its labor laws and treatment of hundreds of thousands of migrant workers, mostly from India, Bangladesh, Pakistan, Sri Lanka, Nepal and other South Asian countries.

Sherpa said it collected testimonies about the working conditions at some of the construction sites operated by Vinci’s subsidiary, which included working in temperatures over 45 C (113 F) with insufficient water, the withholding of passports, and lack of access to showers in accommodations.

Vinci has denied any wrongdoing and said Monday that none of the projects awarded to its Qatari unit QDVC has any connection to the World Cup in Qatar starting later this month.

“In fact, these projects were entrusted to QDVC before the competition was awarded to Qatar and mainly relate to transport infrastructures," Vinci said, adding that it did not sign any contract with the World Cup organizing committee to build any stadium or hotel in Qatar.

The construction group has, however, worked on some of the infrastructure that will be used during the World Cup, including the Doha metro connecting the airport with the historic city center, and the Lusail light-rail transit system transportation network.

Vinci said it is committed to “improve the living and working conditions of all workers at its construction sites, all around the world."

The group added that “respect for human rights and health and safety at work have been a priority for its staff since QDVC was formed in 2007."

The hearing by the Nanterre investigating judge has been set for Wednesday. Vinci complained about its timing, saying that facing charges just before the start of the World Cup amid huge media attention “might be rather unfavorable in terms of a dispassionate consideration of the facts."

Since FIFA awarded the tournament to Qatar in 2010, the country has taken some steps to overhaul the country’s employment practices. However, Human Rights Watch has urged Qatar to improve compensation for migrant workers who suffered injury, death and wage theft while working on World Cup-related projects.