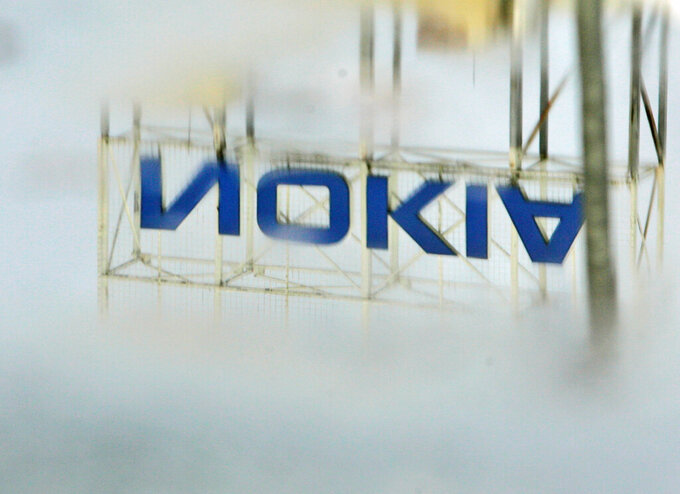 Frank Augstein, ASSOCIATED PRESS
FILE- In this Wednesday Jan. 16, 2008 file photo, a puddle reflects the logo of Nokia in front of the Nokia factory in Bochum, western Germany. Wireless and fixed-network equipment maker Nokia has reported third-quarter profit above analyst expectations on increasing sales of 5G technology and trimmed costs. But the company warned on Thursday, Oct. 28, 2021 that the global shortage of semiconductors clouded the market outlook and could hamper growth. (AP Photo/Frank Augstein, File)

HELSINKI (AP) — Wireless and fixed-network equipment maker Nokia on Thursday reported third-quarter profit above analyst expectations on increasing sales of 5G technology and trimmed costs, but the company warned that the global shortage of semiconductors made the market outlook foggy and could hamper growth.

CEO Pekka Lundmark said the third-quarter results showed the company “delivered another great quarter” driven by its increased investments - hundreds of millions of euros this year alone - into development of 5G technology.

“We could’ve grown faster (in the third quarter) had there been enough components available,” Lundmark said in a conference call with reporters, adding that Nokia was working closely with its suppliers and customers to solve the semiconductor availability problem.

The executive has vowed to make Nokia the world leader in 5G - the new generation of broadband technology - even if it means sacrificing short-term profitability. In 5G technology, Nokia is in a tight race with Nordic competitor Ericsson of Sweden, China’s Huawei and South Korea’s Samsung, among others.

Despite a booming market for 5G products, Lundmark earlier this year acknowledged that Nokia faced problems in certain markets like the United States, where the company has lost market share. Its penetration of the China market also remained low despite Nokia securing an important 5G deal with key operator China Mobile this year.

Lundmark said Thursday that the “headwinds” in the U.S market were offset in the third quarter by a strong growth in Nokia’s fixed networks business, which he said has benefited from the COVID-19 pandemic through booming sales of fixed broadband connections built at private homes and elsewhere. Sales for fixed networks grew 30%, to 588 million euros, quarter-on-quarter.

Nokia reiterated it was expecting its comparable operating profit margin for full year 2021 to stand within 10% to 12%. It said the figure to be at the upper end of that range based on strong performance in the first three quarters.

“The key uncertainty continues to be the supply chain of semiconductors, and we're working every single day with both our customers and our suppliers” to solve the issue and to guarantee availability of the company's products, Lundmark said in a video message published on YouTube after the release of Nokia's earnings report.