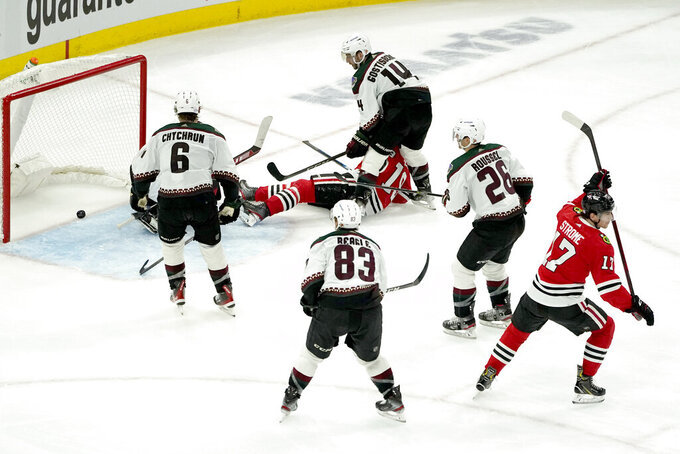 Strome broke the 1-1 tie when he one-timed Kane’s hard pass by goalie Scott Wedgewood before he could react at 9:26 of the third.

“We were all pretty embarrassed by what was going on,” Strome said of the Blackhawks’ struggles that led to Colliton’s firing. “Tied for last place in the league wasn’t acceptable. I think it’s just a little rejuvenation. The guys are playing for each other. The bench is up and everyone’s talking and and the crowd’s into it. I think we’re playing for each other now.”

King’s made only minor changes in Chicago’s defensive set since taking over, in part because of limited practice time. The Blackhawks now don’t play again until Wednesday.

“We’ll just keep picking at the little things,” King said. “Like the neutral-zone forecheck. Have drills where they’re 5-on-5 and turn it into a forecheck.”

Andrew Ladd scored for the Coyotes and Wedgewood had 27 saves. Arizona fell to 1-12-1 this season, including 0-8-1 on the road.

“I think we had too many breakdowns,” Coyotes coach Andre Tourigny said. “Wedgy was really good.”

Arizona’s final chance came on a power-play in the final 86 seconds, with Fleury turning back Phil Kessel.

“For sure, when you’re protecting leads late in games, the goaltending we’ve gotten makes you feel a lot more comfortable anywhere on the ice,” Chicago center Jonathan Toews said.

The Blackhawks opened the scoring in the second period while having an extra man on a delayed penalty against Arizona. DeBrincat raced into the left slot as Kane worked his way through a maze of Coyotes, dodging Jay Beagle, Anton Stralman and Jakob Chychrun before feeding the puck across the crease. Wedgewood couldn’t adjust quickly enough and DeBrincat scored into an open net at 5:26.

“I jumped on the ice on the 6-on-5 so I had a front row seat to it,” Strome said. “Kaner through four guys and Cat’s in his office. They do it in practice all the time.”

Wedgewood argued the goal should not have counted, claiming he’d controlled the puck some 30 seconds earlier, but his argument was denied by the NHL’s replay officials because the puck had cleared the zone before Chicago scored, and the Coyotes were assessed a penalty for delay of game.

“We did not know that blue-line thing,” Tourigny said.

Ladd tied it at 1:41 of the third, beating a screened Fleury with a 35-foot wrist shot. Two Chicago players and one from the Coyotes obstructed Fleury’s view.

Kane has points (4-7–11) in six of his last seven games. ... Arizona C Alex Glachenyuk played his first game of the season after missing the first 13 with an upper-body injury sustained during training camp. ... Chicago LW Brandon Hagel missed his second game because of a left shoulder injury incurred last Sunday against Nashville, and is expected to be out two weeks.

Coyotes: At Nashville on Tuesday night.

Blackhawks: At Seattle on Wednesday night to open a four-game trip.