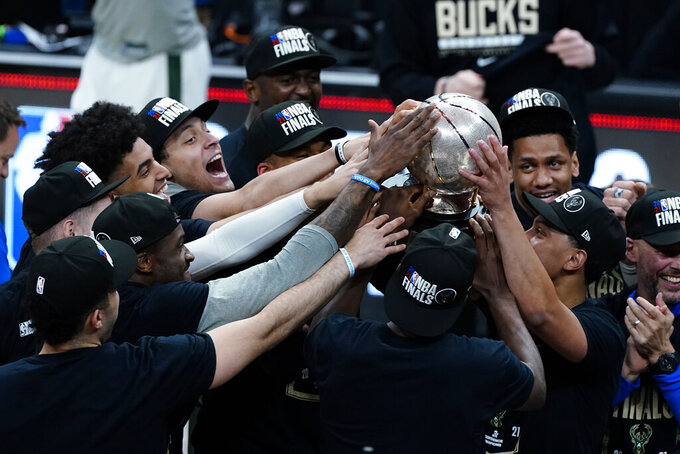 John Bazemore, ASSOCIATED PRESS
The Milwaukee Bucks hoist the trophy after defeating the Atlanta Hawks in Game 6 of the Eastern Conference finals in the NBA basketball playoffs and advancing to the NBA Championship, Saturday, July 3, 2021, in Atlanta. (AP Photo/John Bazemore) 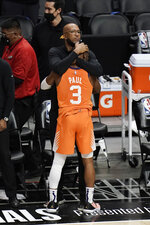 Make way for something new in the NBA Finals.

But there is a whole lot of new in these NBA Finals. Consider:

— It’s the first time since 1998 that the finals will be played without LeBron James, Stephen Curry, Kobe Bryant, Tim Duncan or Dwyane Wade.

— It’s the first time since 1983 that nobody in the NBA Finals has been, or will be, a teammate of Shaquille O’Neal. You read that correctly. Every title series from 1984 through 2020 featured at least one player who had been (or would eventually be) teammates with O’Neal, a list that includes names like Greg Kite, John Salley, Byron Scott, Steve Kerr, Leandro Barbosa, Danny Green and Matt Barnes (along with everyone he played with on the 1995 Orlando Magic, 2000, 2001, 2002 and 2004 Los Angeles Lakers teams, and the 2006 Miami Heat). Though there is one technicality at play here: Phoenix guard Chris Paul and O’Neal were All-Star Game teammates.

— Of the 12 referees working this series, three are in the NBA Finals for the first time. Courtney Kirkland, James Williams and Sean Wright are all set to make their finals debuts, though Wright was an alternate for the 2019 finals.

Phoenix guard Chris Paul is in his 16th NBA season. This is his first finals.

It is a historic wait.

He has played in 123 playoff games without ever reaching the finals, the third-most in NBA history behind Paul Millsap (129) and Al Horford (124).

Tuesday will mark the first time that an NBA Finals game has been played in July — which becomes the seventh month in which a title-round matchup will occur.

Other months that have seen finals games: March, April, May, June, September, and October.

Giannis Antetokounmpo averaged 40 points on 60% shooting in Milwaukee’s two games against Phoenix this season. No player had averaged that, and shot that well, against the Suns in a single regular season since 1992-93 — when Chicago’s Michael Jordan averaged 42 points on 60.3% shooting.

The Bulls ended up playing the Suns in that season’s finals, too.

Milwaukee won the Central Division and Phoenix won the Pacific Division this season.

That means this will be the 10th consecutive season where a division champion will win the NBA title. The last division non-winner to end up as NBA champions was Dallas in 2011. Every team that made the finals since did so after winning a division crown.

NBA Finals games typically start late; most in this series will tip off shortly after 9 p.m. in the Eastern time zone, so they tend to finish around 11:30 p.m.

History says the Suns might go a bit later.

The NBA has also seen three double-overtime finals games. Milwaukee played in one of those, beating Boston 102-101 on May 10, 1974.

A good omen for Milwaukee, perhaps?

Since the NBA went to the current playoff format in 1984, there have been three instances of a No. 3 seed from one conference taking on the No. 2 seed from the other conference in the NBA Finals. (This will be the fourth; Milwaukee was seeded No. 3 in the East, Phoenix No. 2 in the West.)

In all three of the previous 3-versus-2 finals matchups, the No. 3 seed won the NBA title: Detroit over the Los Angeles Lakers in 2004, San Antonio over Cleveland in 2007 and Dallas over Miami in 2011.

Jrue Holiday doesn’t know what it’s like to play in the NBA Finals. Same goes for Giannis Antetokounmpo and Thanasis Antetokounmpo. In fact, no player in this series — except for Phoenix’s Jae Crowder — has logged a single second in a finals game.

The Holiday and Antetokounmpo families have a bit of experience in this area, though.

Justin Holiday, Jrue’s brother, played in a game with Golden State during the 2015 finals. And Kostas Antetokounmpo — Giannis’ and Thanasis’ brother — won a ring with the Lakers last season but didn’t play in the title series against Miami.

One key for both teams in these NBA Finals: Don’t let the other team get a double-digit lead.

Milwaukee and Phoenix have been pretty much unbeatable in these playoffs when either club gets a lead of at least 10 points. The Suns are 11-0 in the playoffs in games where they’ve had a double-digit lead; the Bucks are 10-1, the loss coming when they let a 17-point lead get away against Brooklyn in the Eastern Conference semifinals.

Phoenix’s biggest comeback win this season was 16 points, done twice, including once against Milwaukee. The biggest Bucks comeback win was a game in which they trailed by 19 against Philadelphia.

If the Suns lead this series at any time, the franchise will have a winning postseason record again for the first time since May 18, 1995 — when they were 86-85 in their all-time playoff history.

The Suns enter these finals 145-145 in postseason play.