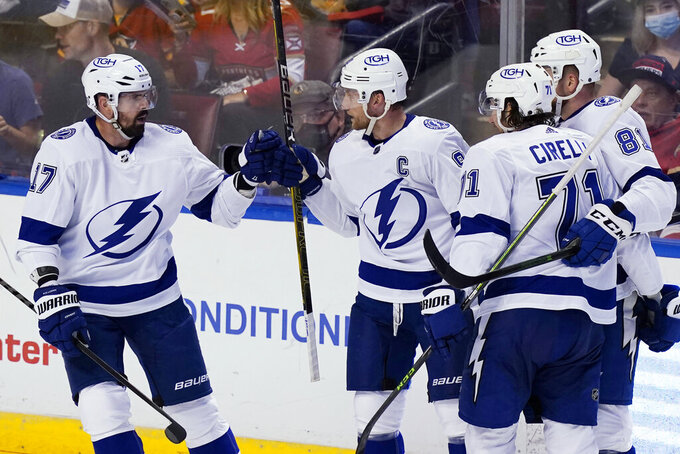 Long before the Tampa Bay Lightning showed they were the best hockey team by winning the Stanley Cup back to back, they proved to be the class of the NHL in something far more mundane to the average fan: managing the salary cap.

With a little luck along the way, general manager Julien BriseBois made all the right moves to position his team for consecutive championships. Exploiting every loophole and unafraid to give up assets to shed salary and make the money work, he went all in and it paid off.

“The stars kind of aligned for us,” BriseBois said.

So, why don’t more teams follow the Lightning’s lead? Many try, but few have an elite goaltender like Andrei Vasilevskiy and other homegrown players at premium positions. Most GMs also tend to take fewer risks than BriseBois.

“The real advantage that Tampa has over most teams or all teams is Vasilevskiy,” said Jim Rutherford, the only other GM to win the Cup back to back in the cap era with Pittsburgh’s titles in 2016 and 2017. “They’ve got the anchor there. They know what they’re getting every game, and as long as he’s what he is today — which should be for quite a long time — they’re going to be a contender.”

Vasilevskiy and playmaking winger Nikita Kucherov are under contract through 2027, top center Brayden Point through 2030, No. 1 defenseman Victor Hedman through 2025 and captain Steven Stamkos through 2024. They take up more than half of the $81.5 million cap limit and the Lightning lost a handful of players in a salary crunch during the offseason, but their championship window is still open for likely the next three years.

Chicago GM Stan Bowman, who has won the Cup three times, has been through this before and applauded BriseBois for making so many calculated moves.

“When you’re in the moment, though, and you’re him, you do things for short-term reasons and you try to win,” Bowman said. “He’s rightfully so getting a lot of credit because he’s walking the tightrope that I walked for three or four years. ... It’s really hard."

The Blackhawks were the first Cup winner to experience a cap crunch. After they won the Cup in 2010, they traded Dustin Byfuglien and Andrew Ladd and let goaltender Antti Niemi leave after an arbitration hearing. They kept their core together by signing Jonathan Toews, Patrick Kane, Duncan Keith, Brent Seabrook and Corey Crawford long term, and it turned into two more championships.

“At the time, it was sort of like: ‘What is wrong with this guy? We just won the Cup. Why are you getting rid of all these players?’” Bowman said. “Now we know this is sort of a regular occurrence.”

BriseBois had a stroke of luck when Kucherov’s recovery from hip surgery allowed Tampa Bay to put him on long-term injured reserve for the shortened 2021 season. Kucherov, one of the best players in the NHL, returned for postseason opener and was again the Lightning’s leading scorer in the playoffs.

After the Lightning knocked out Carolina in the second round, then-Hurricanes defenseman Dougie Hamilton said, “We lost to a team that’s $18 million over the cap.” The league investigated the cap maneuvering and found nothing that violated the rules.

“Julien really did a terrific job, and at the same time it wasn’t just keeping the players he had,” Rutherford said. “He was able to add a piece here or there — whatever he thought he needed. Yeah, he got a break on the (long-term injury exemption) and then of course this year he’s had to part with a few more players. But as good as those players are and as important as they were, Tampa still is one of the favorites to win again this year.”

The NHL hasn’t had a three-peat champion since the New York Islanders in the early 1980s. The cap was instituted in 2005 to create what Commissioner Gary Bettman calls competitive balance. Pandemic-related revenue losses has made it even more difficult for teams to manage salary because there has been no increase from the $81.5 million cap that won’t go up any time soon.

“It used to be, just by the growth of revenue, you would almost ‘out weight’ your mistake,” said St. Louis Blues GM Doug Armstrong, who won the Cup in 2019. “Meaning, a mistake if the cap went up $3 million or $4 million a year, within three years, your mistake’s not quite as glaring. Now because of a flat cap and no increase in the foreseeable future, you have to be much more diligent not to think that revenue with outgrow contracts that don’t stand the test of time.”

Evgeny Kuznetsov’s deal with Washington, signed in 2017, counts $7.8 million against the cap each year and it can be argued that it was worth it since he led the Capitals in scoring on their Cup run the following season. But it is also a reason the aging team has shed salary.

“You can do it temporarily, and then you’re losing guys that you don’t want to lose, and you continue to do that,” Washington GM Brian MacLellan said of managing the cap while contending. “The key for me is to replace them with players that are at an appropriate salary that fit into your structure that still produce. You’re keeping older players that are still successful, but you’re trying to insert younger players.”

Tampa Bay has done that with Mathieu Joseph and Ross Colton -- who scored the only goal in the clinching game of the Cup Final against Montreal last summer -- and will be even younger this season. BriseBois has also hit on Rutherford’s key of adding veterans near the minimum salary: defenseman Zach Bogosian for $850,000 and forwards Corey Perry and Pierre-Edouard Bellemare for $1 million each.

They wanted to play for the Lightning enough to sign bargain deals.

“The wheel kind of spins itself,” BriseBois said. “You’ve got good players, you’re a good team, good players want to sign with you, and it’s just kind of trying to keep the wheel going.”

The wheel won’t spin forever, and the cap reckoning is coming for the Lightning — just as it did for the Blackhawks and Los Angeles Kings and will soon force the Penguins and Capitals to pivot into retooling mode. But not before hanging a second Cup banner in the rafters and taking a few more shots at adding more -- which is all players and fans could ask for.

“We want to win now,” Stamkos said. “And when you have a general manager that’s willing to throw it all in — like, he’s all in — we’d better make this worth it. And it’s one thing to say you’re going to do it. He did it.”