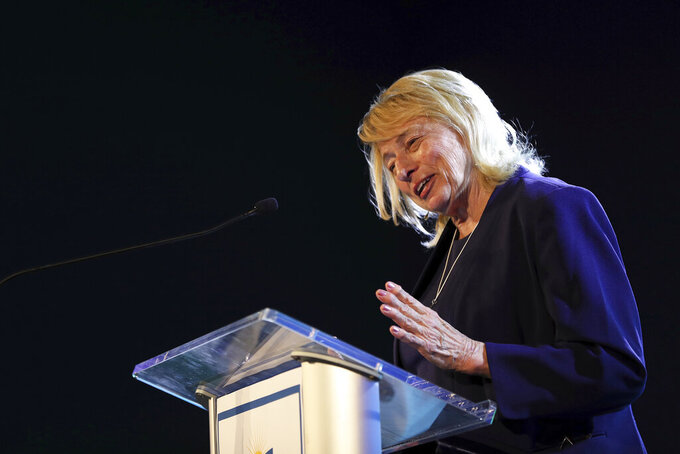 BANGOR, Maine (AP) — Gov. Janet Mills sought to steal a page from the GOP playbook at Maine’s Democratic Convention on Saturday, boasting of returning money to taxpayers and raising the rainy day fund to new heights.

The first woman to serve as governor of Maine contrasted her fiscal and economic record with that of her Republican rival, former Gov. Paul LePage. She said Maine "consistently ranked as one of the worst states in the nation for economic growth” during the Republican’s tenure.

“In coming weeks and months, you’ll hear an all too familiar refrain from the other side of the aisle. That they’re the party of fiscal stewardship, economic growth and lower taxes. That they’re the turnaround specialists Maine needs now,” Mills said. “But facts are stubborn things and they say otherwise.”

The governor spoke to the party faithful at the Cross Insurance Center in Bangor ahead of what's expected to be a difficult, costly reelection campaign against the former two-term Republican governor between 2011 and 2019.

The convention included a livestreamed keynote address from U.S. Rep. Adam Schiff, a California Democrat. The gathering came just days after the completion of a legislative session in which the governor borrowed an idea from legislative Republicans and returned more than half of a $1.2 billion surplus to Maine taxpayers in the form of $850 relief checks.

LePage has derided the checks as a gimmick and said the surplus should've been put towards tax reform.

“Never has an administration done more to destroy Maine’s economic environment than the Mills administration,” LePage said at the Republican convention.

But Mills on Saturday contrasted her record with LePage's on several other fronts, saying she had bolstered the state’s public health agency after LePage “decimated" it “mere months” before the worldwide coronavirus pandemic erupted.

“I don’t know who he was thinking about, but it wasn’t Maine people,” she said in a refrain she repeated often in her remarks. “We won’t go back.”