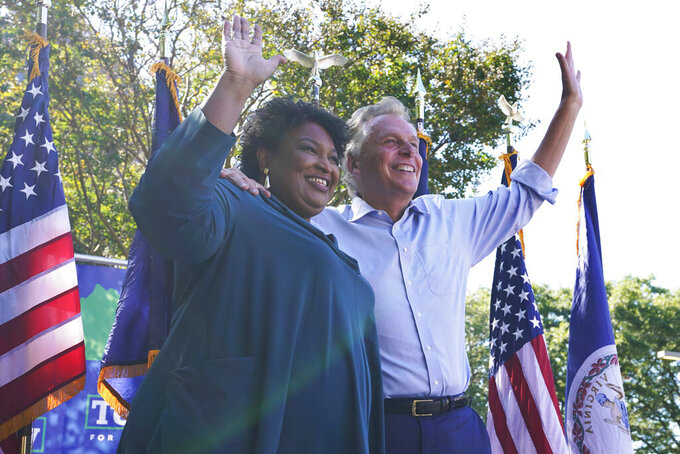 NORFOLK, Va. (AP) — As Democrat Terry McAuliffe worked the crowd at Norfolk State University’s homecoming football game, many fans at the historically Black school were ready with answers before he could even ask for their vote.

But McAuliffe can't afford not to worry. Polls have consistently shown him with the overwhelming support of Black Virginians, but his victory may hinge on whether this core part of his base shows up in strong numbers to vote.

National activists worry that President Joe Biden's falling approval ratings, and a lack of action by the Democrat-controlled Congress on voting rights and issues important to African Americans, could spell trouble in a race with Republican former businessman Glenn Youngkin that already looked exceedingly tight.

“Black voters, by and large, are feeling like they’re being taken for granted,” said Wes Bellamy, co-chair of Our Black Party, which advocates for political positions that benefit African Americans.

And any hint of waning enthusiasm among Democratic base voters could prove even more disastrous for the national party in next year’s midterm elections — when the party's narrow control of both congressional chambers is at stake.

Black voters made up 11% of the national electorate in 2020 and 9 in 10 of them supported Biden last year, playing critical roles in delivering close states like Pennsylvania and Wisconsin, according to AP VoteCast, a nationwide survey of the 2020 electorate. But that means any softening of support could have the opposite effect in statewide races net year.

Democrats have been mobilizing their brightest national stars in hopes of staving off complacency in party ranks. Vice President Kamala Harris recorded a video praising McAuliffe that will be seen at 300-plus churches statewide and campaigned for McAuliffe on Thursday. Former President Barack Obama will be in Richmond this weekend and Biden is coming next week.

They're following Georgia Democratic gubernatorial candidate Stacey Abrams and Atlanta Mayor Keisha Lance Bottoms, who each visited Black churches last weekend. Abrams will be back in the state for a Charlottesville rally Sunday.

McAuliffe, who served as governor from 2014 to 2018, has visited 60-plus Black churches, his campaign says, and last Sunday held the first of several planned “Souls to the Polls” efforts to bring African American worshipers to early voting stations.

It's difficult to gauge the success of those campaigns, since Virginia has only recently begun allowing no-excuse early voting. Still, McAuliffe advisers say they're encouraged by the total number of early ballots cast so far. Nearly 310,000 people have cast in-person ballots, with another almost 180,000 voting by mail.

That pales in comparison to the more than 1 million Virginians who voted by mail during last year’s presidential race, though. Those totals could also be offset by a strong showing on Election Day, when more Republicans than Democrats have tended to vote.

At nearly every campaign stop, McAuliffe, who is white, mentions how he was recruited by leading members of the statehouse Black caucus to run again, and that helped him top three Black candidates in the Democratic gubernatorial primary, two of them woman.

This week he released an ad focusing on the violent 2017 clash between white supremacists and counterprotesters in the college town of Charlottesville, part of an ongoing effort to keep former President Donald Trump front of mind for Virginia voters. The ad contrasted Trump saying there were “very fine people on both sides” against McAuliffe’s own reaction as governor, when he implored the “white supremacists and the Nazis that came into Charlottesville today: Go home. You are not wanted.”

“Terry McAuliffe failed to deliver for the Black community as governor — losing their support — and now he is desperately trying to regain their trust,” said Youngkin spokesperson Macaulay Porter.

Bellamy, of Our Black Party, spent recent weeks driving around Virginia and was surprised at the number of Youngkin yard signs he saw. He said McAuliffe has a “very strong record” that will help him with the Black community, but national Democrats present potential hurdles.

“When you look at national politics, when you look at some of the things that the Biden campaign promised but not quite delivered on yet, I think there will be some trickle-down effect,” he said.

Bellamy singled out Congress' failure to pass federal voting rights legislation and policing reform. He said many Black voters have been troubled that some top Democrats haven't endorsed changing Senate rules to get such legislation passed over unified Republican opposition — but have said they might be willing to change chamber rules to move major spending bills.

Indeed, the Senate took up a voting rights package Wednesday only to have it blocked by Republican opposition — the kind of maneuver changing chamber rules might prevent.

McAuliffe counters that Black voters know his record from his first tenure as governor, when he restored voting rights for many former Virginia felons and others who had been removed from the state’s voting rolls, and pushed state lawmakers to expand Medicare coverage under the Obama administration's signature health law.

He's also released a campaign plan to “Lift Up Black Virginians,” which includes pledges to accelerate the pathway to a $15 per hour minimum wage while working to ensure state government better supports Black-owned banks and promotes diversity in financial fields.

“It’s all about turnout," said Zardee. "But people know, if you didn’t like the last four years we just came out of, you have to come and vote for Terry McAuliffe.”

That message hasn’t reached everyone, though. Regina Scheithauer, a singer and part-time school volunteer, attended the same rally and said of Abrams, “That’s how you get the people to pay attention.”

But Scheithauer said she knew little about McAuliffe — despite the fact that he's already been governor — and said she hadn't yet decided whether to vote for him.

Another potential wildcard is Princess Blanding, the sister of a Black man who was killed by Richmond police in 2018. She is running for governor as a third-party candidate. At McAuliffe’s rally with Abrams, some attendees hoisted Blanding campaign signs, and though their ranks were small, they outnumbered the few protesters present waving Youngkin signs.

The Democratic National Committee has announced a campaign featuring ads on Spanish-language and Black radio, and in print outlets targeting the Asian American community. That’s in addition to spending $5 million in Virginia boosting campaign staff and organizing and training capacity.

But Cliff Albright, co-founder of Black Voters Matter, said Democratic outreach efforts in Virginia have generally been late and underfunded and have relied too heavily on things like ads instead of on-the-ground outreach. Bringing in Democratic standouts likely wouldn't be enough to correct that, he predicted.

“Pulling in new, infrequent voters, it’s going to take more than a couple of visits. It’s really going to take creating some type of excitement at the grassroots level, and ideally some excitement that’s around policy that people feel passionate about and feel like is really on the line," Albright said. “I just don’t know if McAuliffe has really specified to folks about what the urgency is in order to get some of the new voters that they need.”