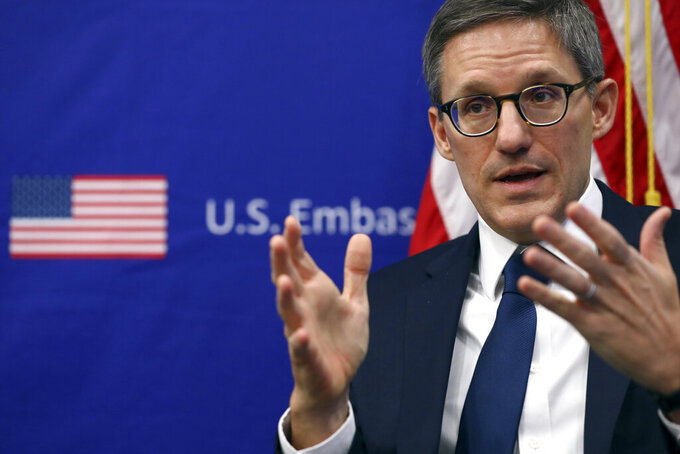 Uncredited, ASSOCIATED PRESS
U.S. State Department Counselor Derek Chollet speaks during an interview with the Associated Press in the capital Sarajevo, Bosnia, Tuesday, Nov. 16, 2021. The United States is paying very close attention to the situation in Bosnia and has tools it can utilize against the divisive nationalist leaders in the war-scared, multiethnic Balkan country who would try to "tear it apart," a senior U.S. official said. (AP Photo)

SARAJEVO, Bosnia-Herzegovina (AP) — The United States is paying very close attention to Bosnia's political crisis and has tools it can use against the divisive nationalist leaders in the war-scared, multiethnic Balkan country who would try to “tear it apart,” a senior U.S. official said Tuesday.

“Our appeal to leaders (in Bosnia) ... is to rise above their own self-interest and to try to keep in mind the broader interest of their county,” U.S. State Department Counselor Derek Chollet told The Associated Press in an interview.

“If leaders continue on the path toward divisiveness, disintegration, withdrawal from the central institutions, there are tools we have to punish that kind of behavior,” he added, mentioning possible sanctions.

Chollet, who serves as an adviser to the U.S. secretary of state, arrived in Bosnia on Monday for three days of meetings with its top political leaders amid the Balkan country’s worst political crisis since a U.S.-brokered peace deal ended more than 3 1/2 years of bloodshed in 1995.

The Bosnian War started in 1992 when Belgrade-backed Bosnian Serbs tried to create ethnically pure region with the aim of joining neighboring Serbia by driving out the country's Croats and Bosniaks, who are mostly Muslim. More than 100,000 people were killed and upward of 2 million, or over half of the country’s population, were driven from their homes before a peace agreement was reached in Dayton, Ohio, in November 1995.

The agreement divided Bosnia into two regions — the Serb-run Republika Srpska and the Bosniak-Croat Federation — which were given wide autonomy but remain linked by some joint institutions including the multi-ethnic presidency, the parliament, the army, the top judiciary and the tax administration.

Serbs have for years been advocating the separation of their mini-state from the rest of Bosnia. But their hardline leader, Milorad Dodik, who has tacit support from Russia and Serbia, recently upped the drive by pledging that the Bosnian Serb region would, by the end of November, declare the creation of its own army and judiciary.

Dodik, who serves as the Serb member of Bosnia's multi-ethnic, tripartite presidency, has threatened to take over Bosnian army barracks in the Serb half of the country once the Bosnian Serb military is formed. He said if the West tries to intervene, he would call his Bosnian Serb “friends” for help.

“We are very worried,” said Chollet. “There is a lot of attention in Washington about the situation here, a lot of concerns about the trajectory that Bosnia is on and fears, first time in 26 years, (the) Dayton (peace agreement) is at its most perilous moment.”

However, Chollet said the United States still believes that Bosnia “has not passed the point of no return.”

“We still believe that there is chance to stop all this ... and it is not just the United States, it is our partners in Europe,” he added.

He said it will take work to bolster Bosnia's democratic institutions and direct the country toward a goal of eventually joining the European Union.

“There is going to be a lot of hard decisions that have to be made, but the United States is committed to do whatever we can to try to prevent the worst from happening and, more than that, try to achieve an even better outcome" by putting Bosnia “back on its path towards its Euro-Atlantic destination," he said.

Dodik, however, remained recalcitrant after he and the other two members of Bosnia's presidency met with Chollet on Tuesday, insisting he had told the U.S. envoy to “just go ahead with sanctions, we are sticking with our policy” of dismantling Bosnia’s multi-ethnic institutions.

This despite a letter raising the possibility of sanctions from U.S. Secretary of State Antony Blinken, which Dodik said Chollet conveyed to the presidency members.

“Sooner or later, the U.S. will have to embrace a realistic policy instead of threatening us with sanctions,” Dodik said, adding that Bosnian Serbs “no longer cared” about threats. “We serve our people and not the U.S. interests.”