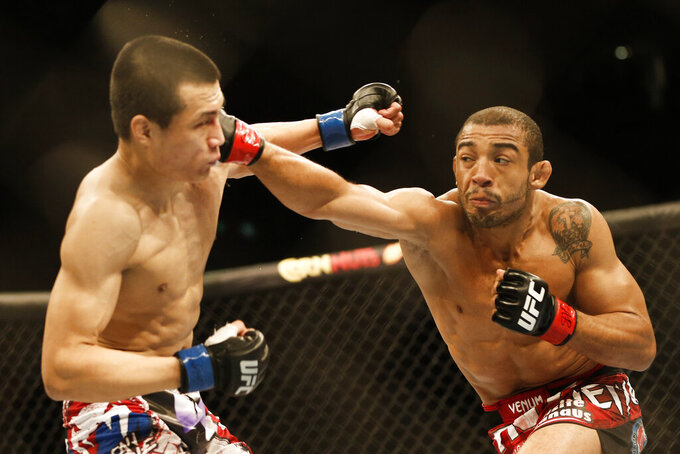 JACKSONVILLE, Fla. (AP) — Alexander Volkanovski has quietly become one of the greatest featherweights in UFC history.

His last four victories came against top contender Brian Ortega and longtime weight-class stalwarts Max Holloway (twice) and José Aldo. Now, after finally starting to get his due, Volkanovski has a chance to add what he calls another “absolute killer” to his resume.

Volkanovski (23-1) will defend his featherweight title in the main event at UFC 273 on Saturday night at Veterans Memorial Arena in Jacksonville when he takes on Chan Sung Jung (17-6), better known as The Korean Zombie.

“It’s not really a new face, but a familiar face,” said Volkanovski, the minus-770 favorite according to FanDuel Sportsbook. “He’s been around forever. It’s a guy I’ve always wanted to fight, always thought I was going to fight. Zombie has been at the top of the game ever since this featherweight division has ever started.

“It’s a legacy fight. I’ve taken down a lot of the legends and I want to keep taking down legends. He’s definitely one of them. He’s earned this spot, he definitely has.”

So has Volkanovski, a 33-year-old Australian who is 10-0 since his UFC debut in 2016. He knocked off Aldo in 2019 to earn a shot at Holloway for the title later that year. He upset Holloway for the belt and beat him again seven months later to retain his spot atop the division. His most recent fight was a unanimous victory against Ortega last September.

Jung is far from a walkover. The 35-year-old South Korean has been a part of the UFC featherweight class for more than a decade. But this will be his first title fight since losing to Aldo by technical knockout in 2013 after injuring his shoulder.

Jung was out of the octagon for nearly four years after that loss, partly to heal and mostly to fulfill a military obligation back home. He has won four of six fights since returning to UFC in 2017.

Jung called this opportunity a “dream” and touted Volkanovski for being the best he’s faced in terms of “fight IQ.” Speaking through an interpreter, Jung said he’s more experienced and less nervous than he was nearly nine years ago.

Volkanovski and Holloway were originally scheduled for a trilogy bout at UFC 272 last month. But shortly after the matchup became public in January, an undisclosed injury forced Holloway to withdraw. Several featherweight contenders volunteered to replace Holloway, but Jung eventually landed the spot.

“I’m happy for him that he got a title shot,” Volkanovski said. “This is probably going to be his last title shot. I don’t want to say I’m looking past him like I’m cocky, but where I’m at right now, I can’t see myself being beaten.

“We did him a solid by giving him this last shot, but that’s it. That’s as far as this favor goes because I’m going to take this away from him.”

The co-main event features UFC bantamweight champion Aljamain Sterling (20-3) defending his belt against Petr Yan (16-2). They were involved in a controversial disqualification a little more than a year ago. Yan was DQ’d for an illegal knee after dominating the fight.

Sterling, a plus-360 underdog according to FanDuel Sportsbook, is coming off surgery to replace a disk in his neck.