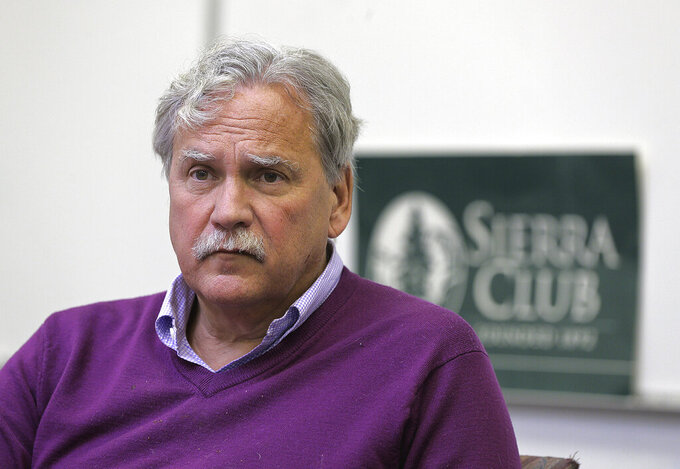 Tanya Breen, ASSOCIATED PRESS
In this Jan. 17, 2017, photo, Jeff Tittel, director of environmental organization Sierra Club's New Jersey chapter, discusses concerns about Exelon Corp.'s Oyster Creek Generating Station during an interview at the chapter's office in Trenton, N.J. On Wednesday, March 24, 2021, Tittel announced his retirement as director of the New Jersey Sierra Club, which he led for 23 years. As one of the state's highest-profile environmentalists, Tittel battled government agencies and private industry over issues including pollution, development and public access to beaches and waterways. (Tanya Breen/The Asbury Park Press via AP)

The 64-year-old Tittel said Wednesday he will soon step down as director of the New Jersey Sierra Club, which he has led for 23 years.

During that time, he became the bane of many elected officials and industry groups for his high-volume advocacy for environmental issues, including a campaign to close the former Oyster Creek nuclear power plant, which shut down in 2018.

Tittel said he comes from a family of activists, and attended his first sit-in at age 4.

“Growing up on the Newark-Hillside border, I learned about the meaning of environmental justice and the importance of activism from an early age,” he said. “When you threw matches at the stream, it would flare up. There was a foundry down the street that left soot on the cars so that you could write on them.”

Tittel often sought the spotlight in trumpeting support for — or more frequently, opposition to — government measures intended to help the environment. In most cases, Tittel felt government did not go far enough, and pointed out the perceived shortcomings in detail.

He also prided himself on being one of the most quotable environmentalists, larding his press releases and public speeches with phrases designed to grab attention.

For instance, he once compared the use of sea walls along ocean beaches to the Maginot Line, a series of fortifications built by the French in World War II. Just as the Germans swarmed around either side of the line during battle, so would ocean water surge around either end of the sea wall.

Speaking against a proposed bill that would allow oyster colonies to be planted in polluted waters, he said, “We're throwing the baby out with the clam broth.”

And in one of his many broadsides against the Oyster Creek nuclear plant, which was one of the oldest in the country when it shut down, he called the antiquated reactor “a 1969 Buick in the age of the Prius.”

He was a strong proponent of measures to improve water quality in the ecologically fragile Barnegat Bay, and spoke out frequently in favor of greater protections for the public's right to access beaches and waterways. He also vocally opposed offshore drilling, underwater seismic testing for oil and gas exploration, and the use of chemicals that end up contaminating waterways and drinking supplies.

His retirement will become effective May 1. The Sierra Club has not yet designated a successor, he said.